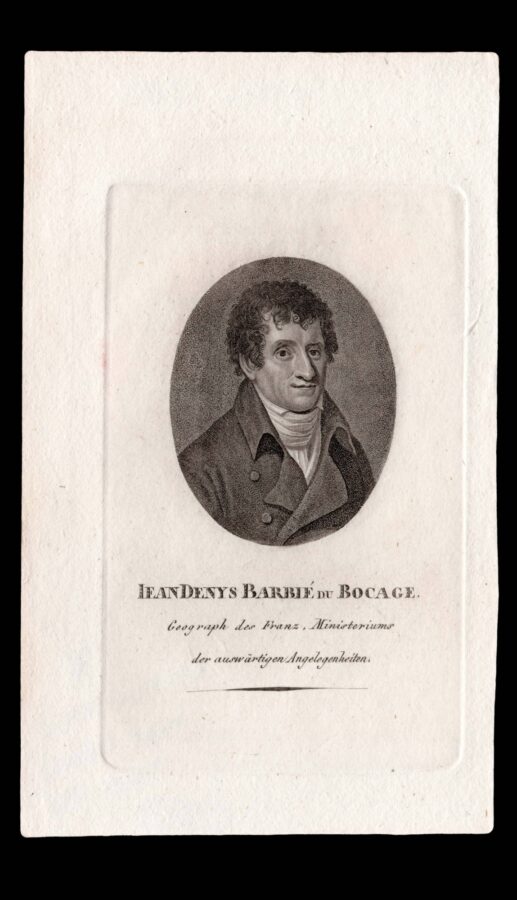 In 1798, German astronomer Franz Xaver von Zach partnered with influencial publisher Friedrich Justin Bertuch to launch the very first astronomical-geographical journal, the ​‘Allgemeine geographische Ephemeriden’. Depsite disputes between Zach, who had in mind a purely scientific journal, and Bertuch, who wanted to produce an educational magazine for the enthusiast, the AGE continued to appear under a variety of names until 1831.

In 1803, the twelfth volume of ​‘Allgemeine Geographische Ephemeriden’ featured a portrait of Jean-Denis Barbié du Bocage (1760–1825), the only student taken on by the important French geographer Jean-Baptiste Bourguignon d’Anville. With this promising training, Barbié du Bocage went on to enter government in a cartographical capacity, taking charge of the geographical department of the Bibliothèque du roi, and providing maps for new publications. During the turbulent years that spanned the end of the eighteenth century and beginning of the nineteenth, Barbié du Bocage continued in a similar capacity under France’s various governments. In 1814, Louis XVIII made him a Knight of the Royal Order of the Legion of Honour, and the following year he was appointed dean of the Sorbonne. Later, he helped found the Geographical Society, where he specialised in maps of antiquity.

Westermayer’s portrait of Barbié du Bocage shows him in a simple jacket and white cravat, set in an oval frame and accompanied by a caption explaining his positions.