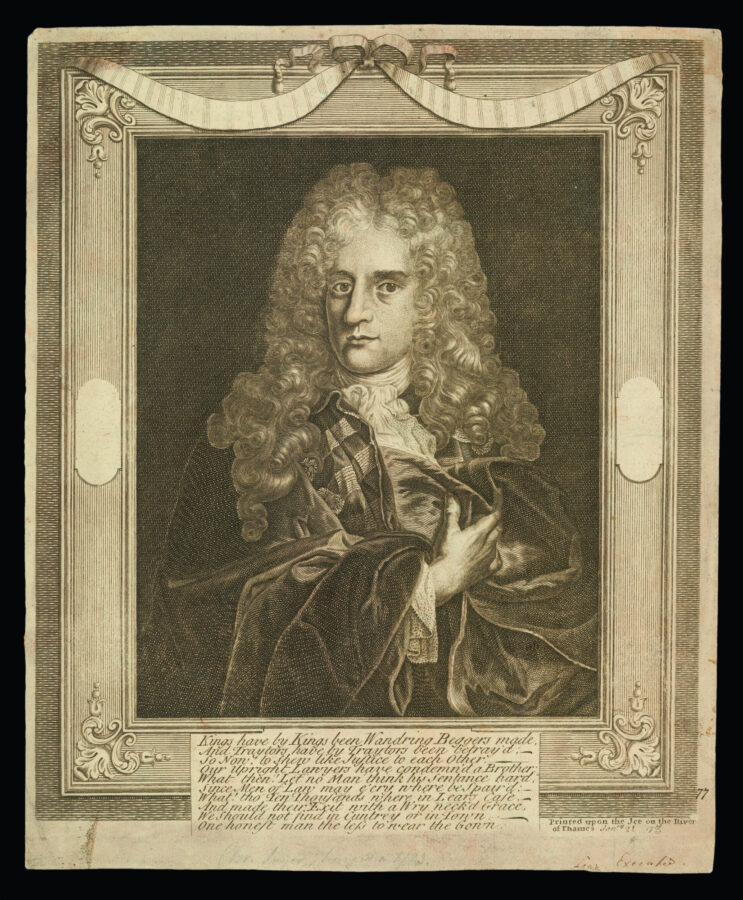 [Seditious Souvenir Portrait from the Frost Fair of 1740].

A deliberately ambiguous portrait of Christopher Layer (1683–1723), London lawyer and Jacobite conspirator who was hanged (and maybe also, drawn and quartered) for treason, showing him uncannily like both George II and the ​“Old Pretender” James Francis Edward Stuart, above a polemic in his honour:

​“Kings have by Kings been Wandring Beggers made,
And Traytors have by Traytors been betray’d;
So Now to Shew like Justice to each Other,
Our Upright Lawyers have condemn’d a Brother:
What then! Let no Man think his Sentace hard,
Since Men of Law may e’ery where be Spair’d;
What! Tho Ten Thousands where in Lears Case,
And made their Exit with a Wry neck’d Grace,
We Should not find In Cuntrey or in Town,
One honest man the less to wear the Gown“

The son of a lace-maker (hence Layer’s lacy clothes), and nephew of an inveterate Jacobite, Layer travelled to Rome to meet the ​“Old Pretender” in May of 1721. He returned to London with ambitious plans: ​“to seize the Tower, the Bank of England, and the Royal Mint, and to take George I into protective custody if he had not by the autumn left England for Hanover. Once London had been taken, the general commanding the forces would send messengers to those who had agreed to rise in their respective districts outside London” (Roger Turner for DNB). The plot was discovered, and Layer arrested. But his cause continued, and his name invoked, as here, to raise funds and support for the uprising of 1745.

The River Thames has been known to freeze over on several occasions, especially during the ​“Little Ice Age” of the sixteenth to nineteenth centuries, upon which the inhabitants of London took to the solid ice for business and pleasure. The most important of these ​“Frost Fairs” occurred in 695, 1608, 1683–4, 1716, 1739–40, 1789, and 1814. In 1684, during the Great Freeze of 1683–4, which was the longest in London’s history and during which the ice reached depths of around 28cm, the diarist John Evelyn recorded the attractions of the Frost Fair:
​“Streetes of Boothes were set upon the Thames… all sorts of Trades and shops furnished, & full of Commodities… Coaches plied from Westminster to the Temple, and from several other stairs too and fro, as in the streets, sleds, sliding with skates, bull-baiting, horse and coach races, puppet plays and interludes, cooks, tippling and other lewd places, so that it seemed to be a bacchanalian triumph, or a carnival on water”.

The winter of 1739 had started in October when easterly winds spread frosts across the British Isles. A more intense cold set-in on Christmas Eve, with severe frosts persisting day and night until February 17, 1740. Over the new year, temperatures reached ‑10 degrees centigrade in London. The diary of George Smith, one of Queen Anne’s proctors, from 1740 records that the ​“Thames froze over in 4 days, storm of wind 48 hours (30th Dec) Some people walked over the Thames (1st Jan) Frost continued till February 1st, when a thaw began in day, frost returning each night. Ice all gone in Thames upward but not broke about London (Feb 11th) Ice beings to run in Thames (13th Feb) Ice broke in Thames (17th) Ice gone at London (23rd)”.

Despite Smith’s claims that ​“some people walked over” the frozen river, there are many records of a large and popular fair having taken place atop the ice. During January, London’s entertainers, peddlers and merrymakers took to the frozen Thames to enjoy the food stalls, temporary pubs and printing presses that had been installed on it. The latter offered eager punters the chance to have a personalized print made for them, ​“printed on the Thames”. This generally meant the customer’s name printed in a pre-set decorative border, often accompanied by some lines of verse or a small vignette. 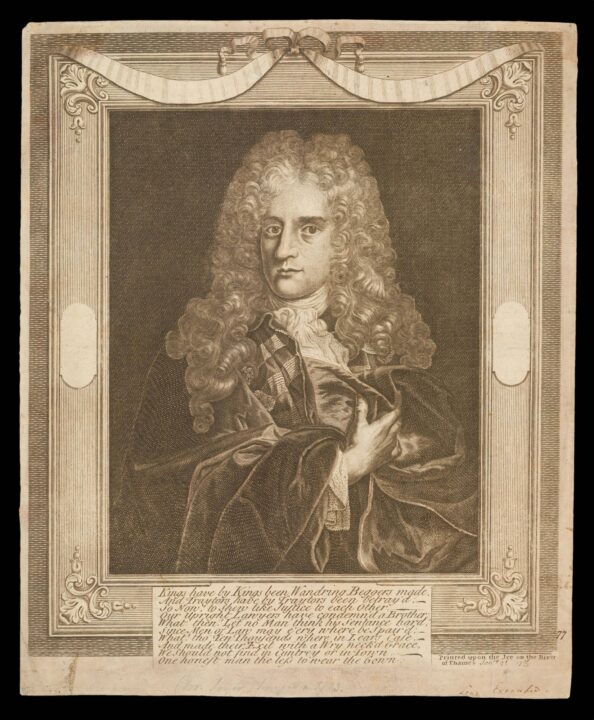