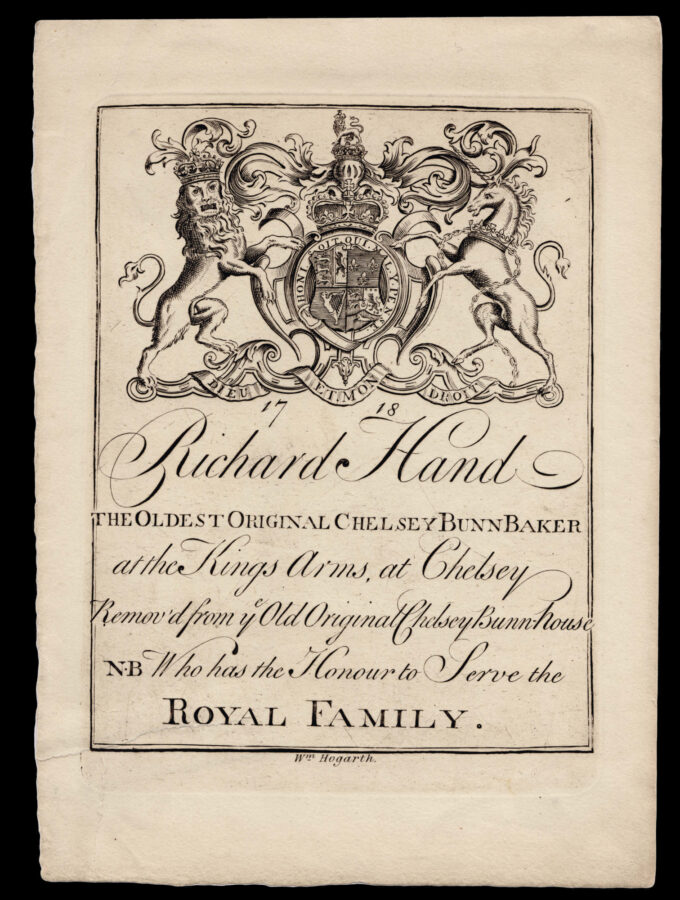 I is for Inventor (of the Chelsea Bun!)

Trade card for the Old Chelsea Bun House, where the famous Chelsea Bun was first baked and sold in its thousands.

At the turn of the eighteenth century, Richard Hand, the proprietor of the House, began to sell a bun made of rich, flavoured dough, rolled into a spiral, scattered with currants, brown sugar and butter, and finally glazed with syrup. This creation earned Hand the nickname ​‘Captain Bun’, and would soon take on the name of the shop, becoming widely known as the Chelsea Bun within a matter of years. Indeed, in 1711, Jonathan Swift mentions the ​“Rrrrrrrrrare Chelsea buns” in his journal.

For the next century, the Chelsea Bun retained its extraordinary popularity, receiving the patronage not only of local Londoners but also royalty; after the death of Richard Hand, his wife received five guineas from Queen Charlotte, who took her children to the Bun House! When Mrs Hand followed her husband, the business was taken over by their son, who increased the income made on baked goods by selling also butter to local customers. The Bun House later fell into the hands of his older brother, upon whose death in 1839 the bakery reverted to the Crown, there being no more Hands left to inherit it. Nonetheless, the Bun House went out with a bang, with The Mirror reporting that ​“he sold on last Good Friday, April 18th, 1839, upwards of 24,000 buns…”.

Unfortunately, the original Bun House was knocked down, although another bakery was later built in its place and continued to sell the delicacy. The original building consisted of a single storey fronted by a portico. As described in ​‘The Gentleman’s Magazine and Historical Chronicle’ of 1839, ​“the colonnade extended over the foot pavement into the street, and afforded a tempting shelter and resting-place to the passenger to stop and refresh himself”. It was situated on Jew’s Row, by the Ranelagh Pleasure Gardens; in fact, when these gardens closed in 1804, the Bun House experienced a notable drop in business.

The present trade card seems to have been produced after Hand had been ​“Remov’d from ye Old Original Chelsey Bunn-house”, and was the licensed operative at the Kings Arms, a pub dating back to Charles II, whose name and arms it bears to this day. Heal believes that the inscription beneath they royal crest attributing the engraving to the famous artist William Hogarth is a latter addition that is not to be trusted. The quality of the engraving, and particularly of the animals that flank the crest, certainly seem to fall short of Hogarth’s standard.

Engraved by William Hogarth (1697–1764), the celebrated satirical artist and printmaker, and a number of series of engravings on moral subjects, including, most famously, ​‘The Harlot’s Progress’ (1732), and ​‘The Rake’s Progress’ (1735). 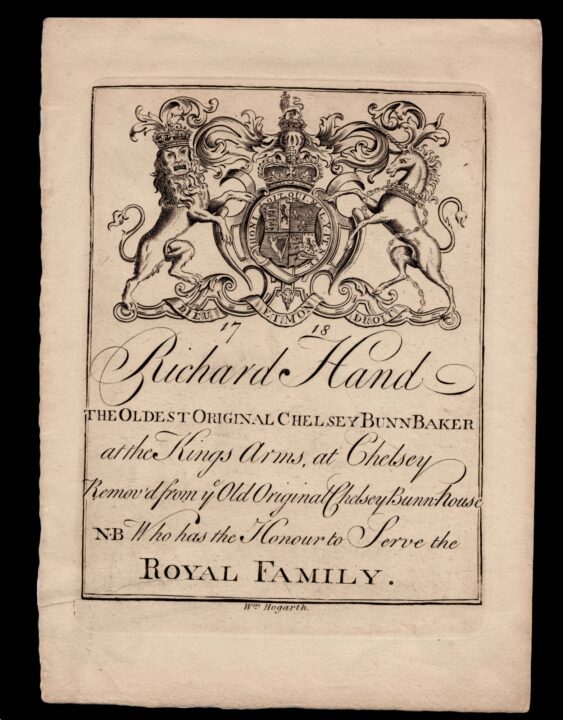