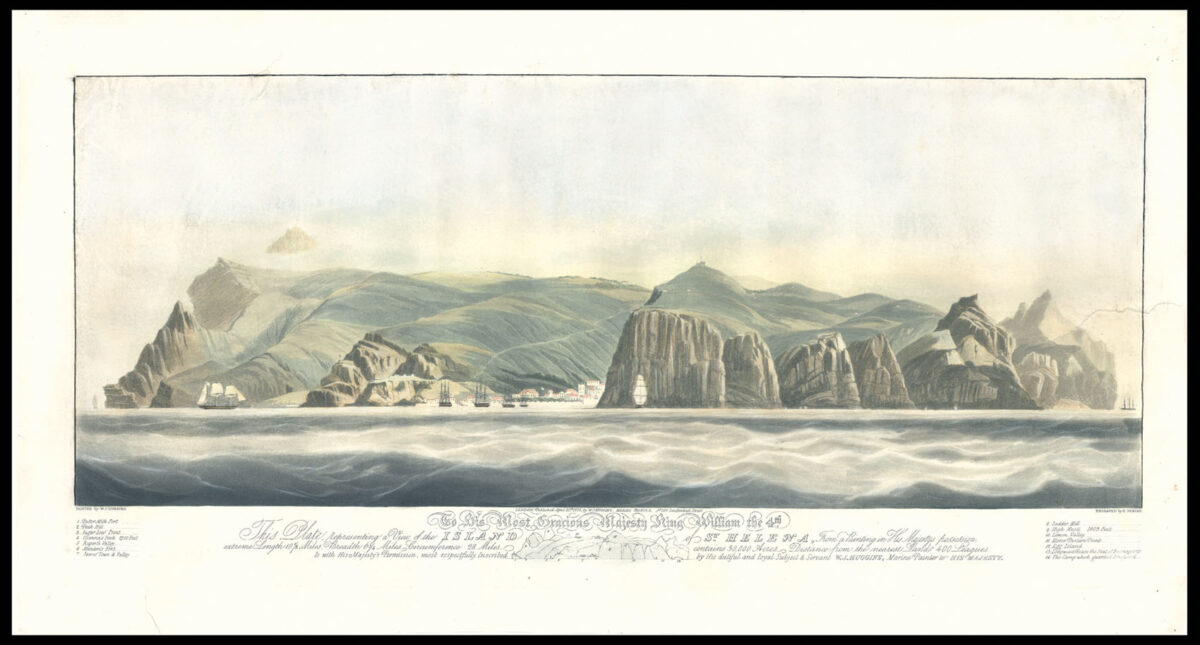 To His Most Gracious Majesty King William the 4.th This Plate, representing a View of the Island of St Helena From a Painting in His Majesty’s Possession. extreme length 10½ Miles. Breadth 6¾ Miles. Circumfrence 28 Miles. contains 30,000 Acres. Distance from the nearest Land 400 Leagues. Is with His Majesty’s Permission, most respectfully Inscribed by his dutiful and loyal Subject & Servant W.J. Huggins, Marine Painter to His Majesty.

William John Huggins (1781–1845) was an English painter of whose early life little is known but who is first recorded as an ​“ordinary seaman” serving as a steward and assistant to the purser on the East Indianman ​‘Perserverance’, on a voyage to Bombay and China in 1812–14. From this, and any other voyages he might have made, he probably returned with sketches which lasted him many years, though he may have also used other peoples’. For example, he knew Clatkson Stanfield in the early 1820s, after the latter had also returned as a seaman from the China voyage (in 1816)and was starting his career as a theatre scene painter, and marine and landscape artist. by the time he exhibited at the Royal Academy in 1817, Huggins had set up as a marine painter and ship portraitist in Leadenhall Street, close to East India House, where he remained for the rest of his life, last exhibiting at the Academy in 1844. He appears to have some early help from Thomas Duncan (c.1779–1841), a ship decorator, art teacher and print colourist whose son Edward (1803–82) in turn worked with Huggins, lithographed about 150 of his pictures, and it 1834 married his eldest daughter, Berthia. Huggins’ work, both original and in print by Duncan and others, found a ready market amoung merchants and seamen. There are 18 ship portraits by him, and eight other oil subjects, in the National Maritime Museum, as well as drawings and prints. His range also included battle scenes and in September 1830 he was appointed Marine Painter to the ​“sailor king” William IV who commissioned three views of the Battle of Trafalgar, from him: all are still in the Royal Collection.