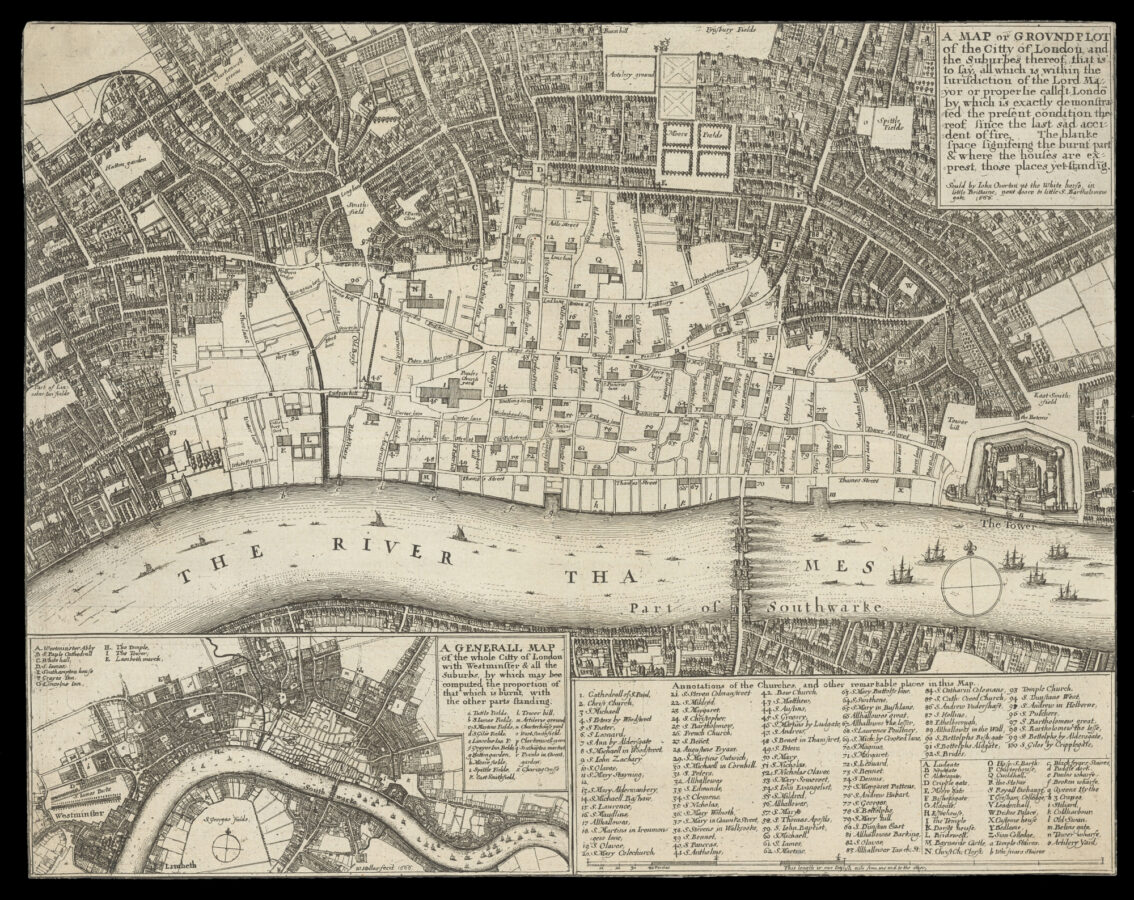 A Map or groundplot of the Citty of London and the Suburbes thereof that is to say all which is within the iurisdiction of the Lord Mayor or properlie calld ​‘t Londo[n] by whijch is exactly demonstrated the present condition thereof since the last sad accident of fire. The blanke space signifeing the burnt part & where the houses are exprest those places yet standi[n]g.

The Great Fire of London broke out in a bakery on Pudding Lane, on Sunday 2nd September 1666 and raged for three days destroying most of the City of London. By the end, the fire had consumed some 13,000 buildings from Temple in the west to The Tower in the east, and Cripple Gate in the north, with thousands of people being left homeless. Just five days after the flames had been tamed, the King commission Wenceslaus Hollar and Francis Sandford ​“to take an exact plan and survey of our city of London with the suburbs adjoining as the same now stands after the sad calamity of the late fire with a particular depiction of the ruins thereof”.

Hollar was an obvious choice as he had been preparing, since 1660, a large bird’s-eye view of the city, some ​“10 foot in breadth, and 5 foot upward”. Although his grand view was backed by the King, the project struggled for funding, and the Great Fire would make many of his endeavours redundant. Nonetheless, the two men worked quickly to survey the wreckage and by mid-November Hollar had engraved the first map showing the extent of the damage: ​‘A Map of the Groundplott of the Citty of London with the Suburbes thereof…’.

Soon after, or more probably concurrently, he would engrave this map, for the map and printseller John Overton. The map is on the same scale as the former work, and bears an almost identical title. However, Hollar has slightly increased its extent to include Lincoln Inn’s in the west, and more buildings east of The Tower of London. The area devastated by the fire is shown devoid of house, only the street layout and the ground plans of the churches and principal public buildings are marked. The key, which as been moved to the lower right-hand corner, lists 101 churches, 82 of which had been consumed by the fire, together with a list of 24 public buildings and gates (A‑Z), and 14 whares, staires, and docks (a‑o). Hollar has also included, for the first time on any post fire map, an inset of the whole of London, ​‘A General Map of the whole Citty of London with Westminster and all the suburbs…’, which puts into context just how devastating the fire was for central London.

The present example is the second state, which was printed and sold by John Overton.