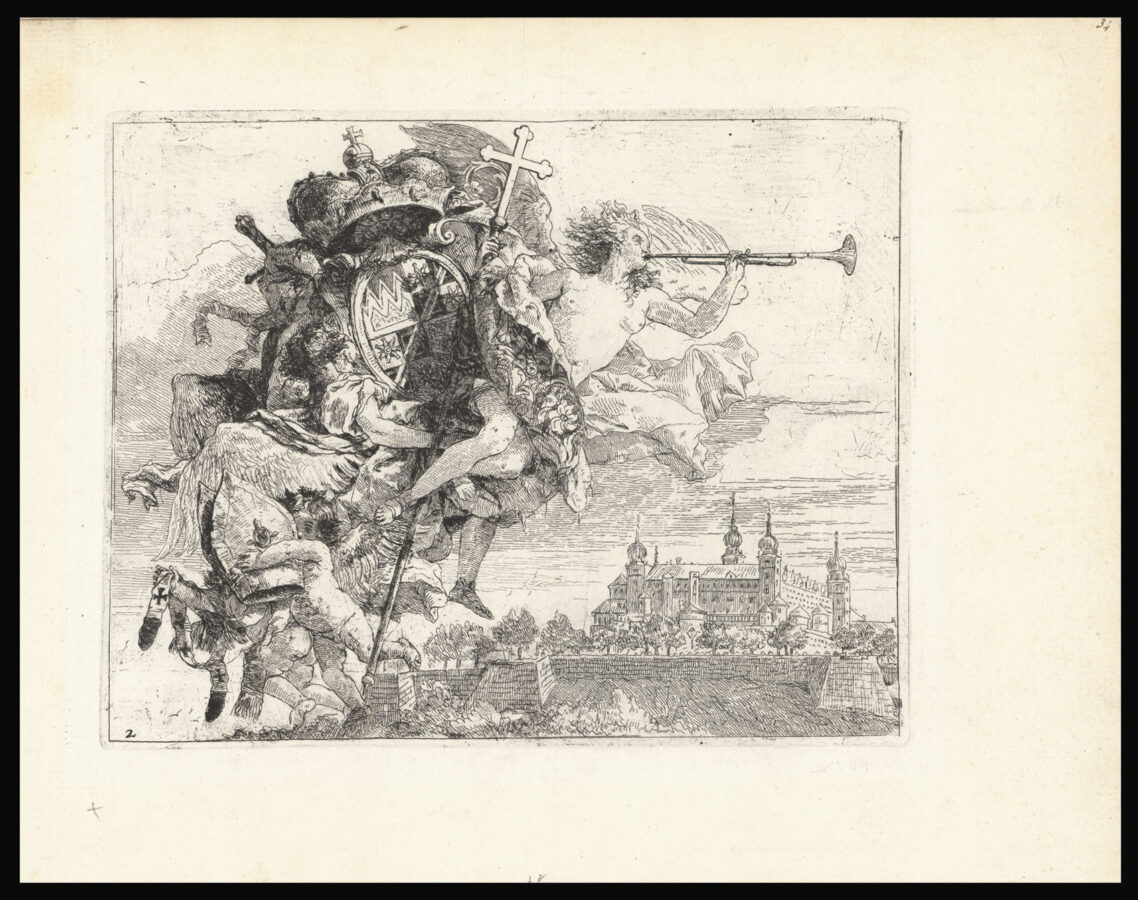 The dedication leaf from Giandomenico Tiepolo’s suite of engravings, ​‘The Flight into Egypt’ — his crowning achievement as a printmaker.

This print, the dedication leaf of the series, is an allegorical scene depicting a group of angels carrying the patron’s coat of arms, as well as symbols of religious piety and worldly authority, represented by ecclesiastical vestments and a sword and crown. A mixture of religious and secular symbols was well suited to the donor, the Prince-Bishop of Wurzburg, Carl Philipp von Greiffenclau zu Vollraths (1690–1754), who held a dual role as secular ruler and chief cleric of his city-state. The Prince-Bishop’s ancestral home, Marienberg fortress, dominates the landscape in the print’s background, acting as yet another nod to Tiepolo’s patron.

Giovanni Domenico Tiepolo (1727–1804), born into a family of prominent Venetian artists, was the son Giovanni Battista Tiepolo and the older brother of Lorenzo Baldissera Tiepolo. Giandomenico enjoyed a successful career from an early age, first as chief assistant to his father, and later as an artist in his own right. Though he worked primarily as a painter and draftsman, he also worked as a printmaker and created two notable series of etchings – ​‘The Flight into Egypt’ and ​‘The Stations of the Cross.’ ​‘The Flight into Egypt’ was produced at a pivotal moment in 23-year-old Giandomenico’s artistic career, while he was still working as an assistant to his father and, at the same time, just beginning to accept his own commissions. It was with this series that he sought to prove his worth as an artist, and step out from under his father’s shadow.

Giandomenico worked in the Baroque style, and this engraving is no exception. The composition consists of strong diagonals and a dramatic sense of movement, both of which are chiefly on display in the dense grouping of angels in the foreground. The artist’s light and sketchy line heightens this feeling of movement, reinforcing what was suggested in the work’s dynamic composition.

Giandomenico travelled to Franconia with his father and stayed there from 1751–53 painting frescoes in the Neue Residenz in Wurzburg, the Prince-Bishop’s newly constructed baroque palace. It was during this time that Gianlorenzo presumably received his commission and began engraving ​‘The Flight into Egypt,’ at the time easily the most important commission of his burgeoning career.