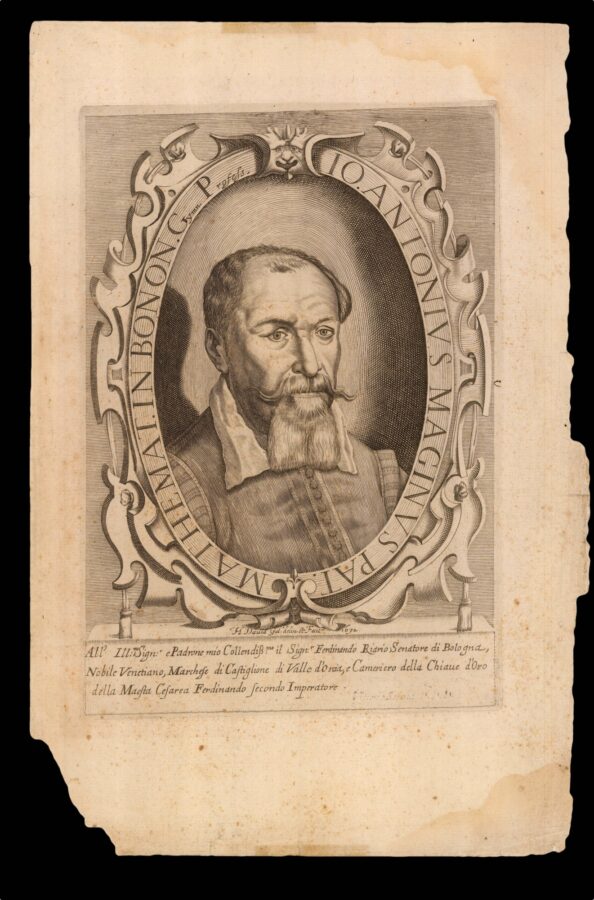 Paduan astronomer, astrologer and cartographer Giovanni Antonio Magini (1555–1617) was so well respected within the field of mathematics that in 1588 he was chosen for the chair at the University of Bologna over Galileo Galilei. While also serving as official astrologer to the court of the Duke of Mantua, Vincenzo I, he devised his own planetary theory and developed extremely accurate trigonometric tables which were applied to the geometry of spheres. Vincenzo was also the patron of Magini’s greatest cartographical project, ​‘Atlante geografico d’Italia’, an atlas that he intended to include a map of every Italian region accompanied by historical notes. The work proved costly and was not completed until after his death, whereupon his son published it in 1620. Interestingly, Magini had not undertaken any of the mapping himself.

Magini’s portrait was engraved by Jerome David, who was active in Paris during the early decades of the seventeenth century and then in Bologna and other parts of Italy until his death in Rome around 1670. Similar portraits, all showing the bust of the cartographer within an oval frame, appeared in books or collections around the same time, but it is not clear in which work the present plate was included. Beneath the image a caption in Italian highlights Magini’s most notable achievements, works and roles.