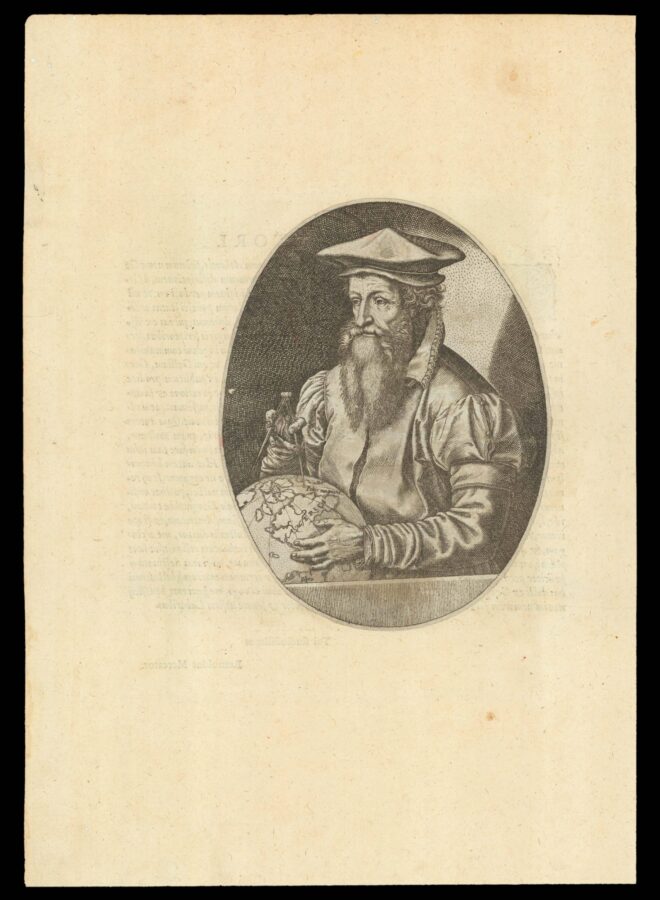 Gerard Mercator (1512–1594) was the most influential cartographer of the sixteenth century, publishing his famous world map in 1569, and the printing the first atlas to be so named. Born in Rupelmonde in East Flanders in 1512, he studied in Louvain under Gemma Frisius, a Dutch astronomer and mathematician, and began his career as a cartographer in that city. The excellence of his early work eventually won him the patronage of Charles V. In order to escape religious persecution, however, he fled to Duisburg in 1552, where he continued to produce maps, globes and instruments.

During his later career he devoted himself to the preparation of his three-volume collection of maps to which, for the first time, the word ​“atlas” was applied. The word was chosen, he wrote, ​“to honor the Titan, Atlas, King of Mauritania, a learned philosopher, mathematician, and astronomer”. His first atlas, however, appeared in 1578, an edition of Ptolemy’s ​‘Geographia’ containing twenty-eight maps engraved by Mercator, as well as his world map on a Ptolemaic projection, entitled ​‘Universalis Tabula’.

In 1576, Flemish printmaker Franz Hogenberg produced a half-length of Mercator, wearing a flat cap and holding a compass and a globe, on which America, Peru and the magnetic pole are labelled. This served as frontispiece to Mercator’s ​‘Italiae Sclavoniae, et Graeciae tabulae geographicae’, published in 1589. The present example lacks the decorative border and plinth found on the original, and appears to have been produced around twenty years later.