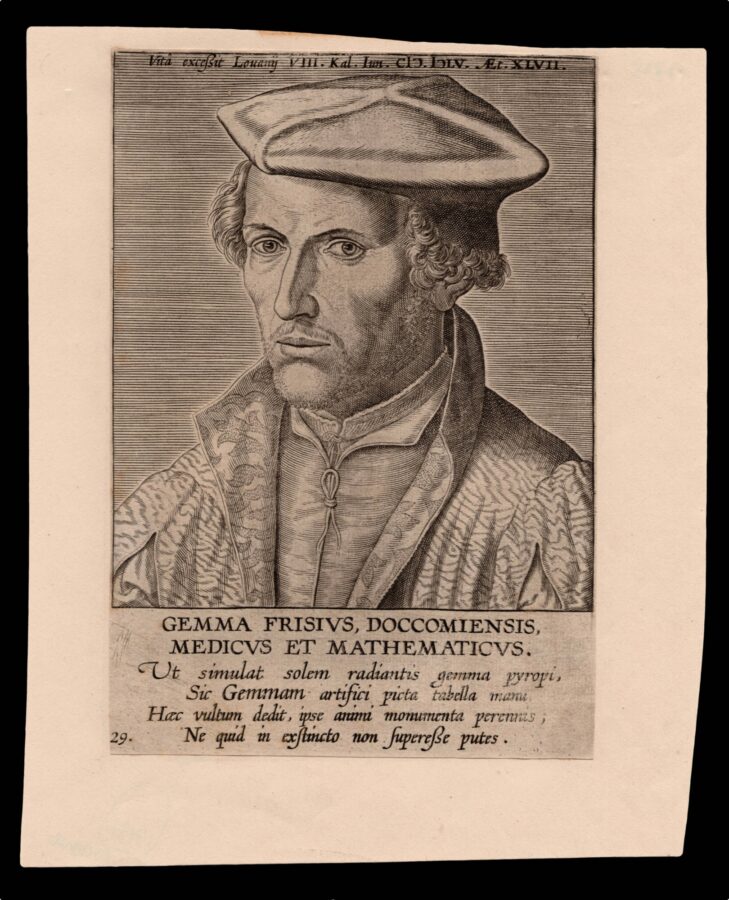 By GALLE, Philips, after; after Maarten van KEEMSKERCK, 1690

Gemma Frisius (1508–1555) was a Dutch physician, mathematician, cartographer, philosopher and instrument maker, creating important globes and improving the mathematical instruments of his day. In Louvain, he tutored none other than Gerard Mercator, who executed the engraving for some of his globes. Alongside this star student and Abraham Ortelius, Frisius came to be considered one of the founders of the Netherlandish school of cartography.

Frisius’s portrait was painted by Maarten van Heemskerck in the mid-sixteenth century, and later published as an engraving by Philips Galle. It shows the cartographer wearing a broad flat-cap and embroidered jacket. The present example is from the end of the following century, around 1690, and has a different set of Latin verses beneath the portrait: ​“Ut simulat solem radiantis gemma pyropi, Sic Gemmam artifici picta tabella manu: Haec vultum dedit, ipse animi monumenta perennis; Ne quid in exstincto non superesse putes” (‘Just as a gem of glowing garnet imitates the sun, So too this tablet painted by the artist’s hand imitates a Gem; This tablet leaves us his visage, he himself left monuments to his eternal soul; Lest you think that nothing survives after death’).