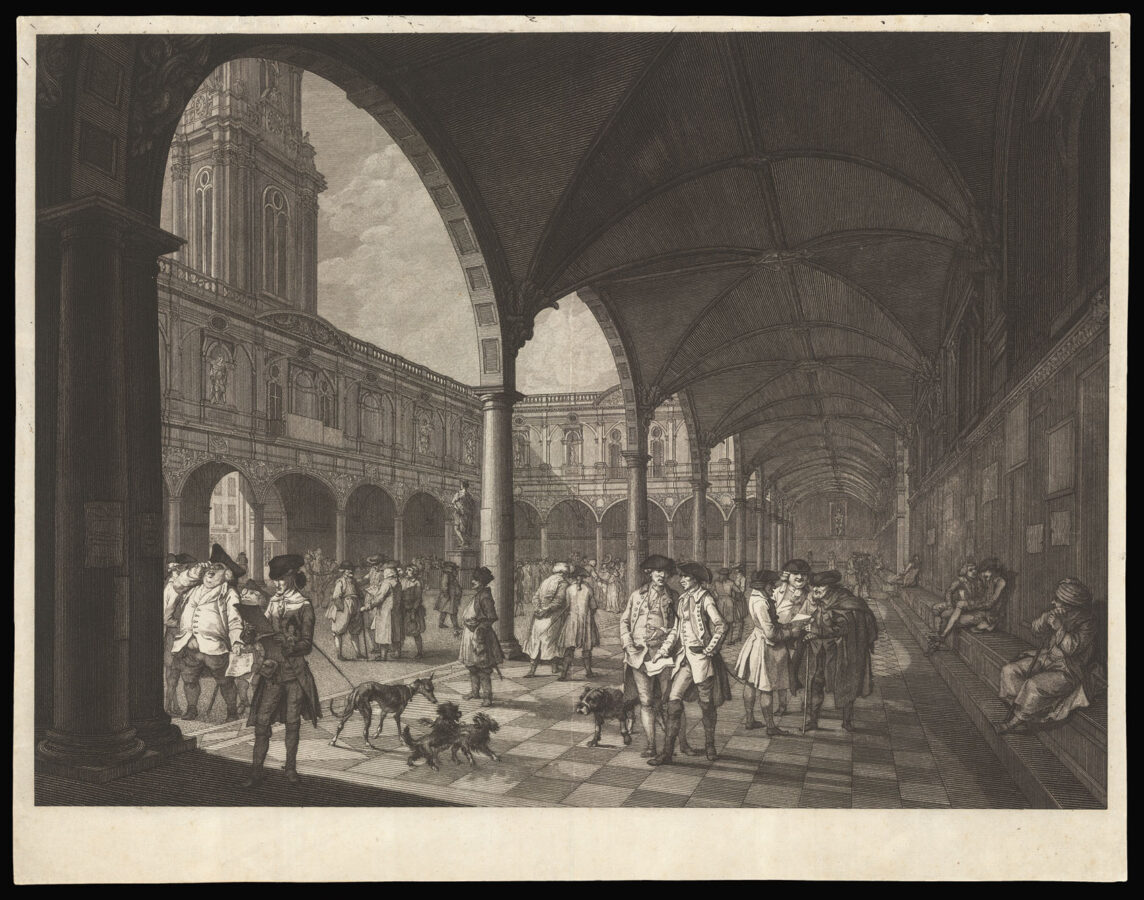 “Finished and Embellished in so exquisite a manner”

By BARTOLOZZI, Francesco after CHAPMAN, John and LOUTHERBOURG, Philippe-Jacques de, 1788

[View of the inside of the Royal Exchange, London].

A view of the courtyard in the Royal Exchange with merchants and brokers, by Francesco Bartolozzi RA (1727–1815). The lettered version of the print is dedicated to William Pitt.

There have been three Royal Exchanges. The first, based on the Antwerp Bourse, was built at the expense of Sir Thomas Gresham in 1565 (the grasshopper on the top of the present Exchange recalls Gresham’s family crest). The site was provided by the Corporation of the City of London and the Mercer’s Company. Roughly triangular, it is formed by the converging streets of Cornhill and Threadneedle Street. The present image is of the second exchange, built on the same site after the Great Fire of London, designed by Edward Jarman and opened in 1669. Daniel Defoe noted in the 1720s that the Royal Exchange was ​“finished and embellished in so exquisite a manner”, that although it ​“cost the citizens an immense sum of money”, it was money well spent. This too was destroyed by fire on 10th January 1838.

The present exchange, still at the heart of the City of London, built to a design by Sir William Tite, was opened in 1845. Heywood’s lines about the first Exchange are equally apt for the second: ​“Not in my life; yet I have been in Venice, In the Rialto there, called Saint Mark’s; ​‘Tis but a bauble, if compared to this. The nearest, that which most resembles this,
Is the great Burse in Antwerp, yet no comparable Either in height or wildeness, the fair cellarage, Or goodly shops above. Oh my Lord Mayor, This Gresham hath much graced your city, London; His fame will long outlive him”.