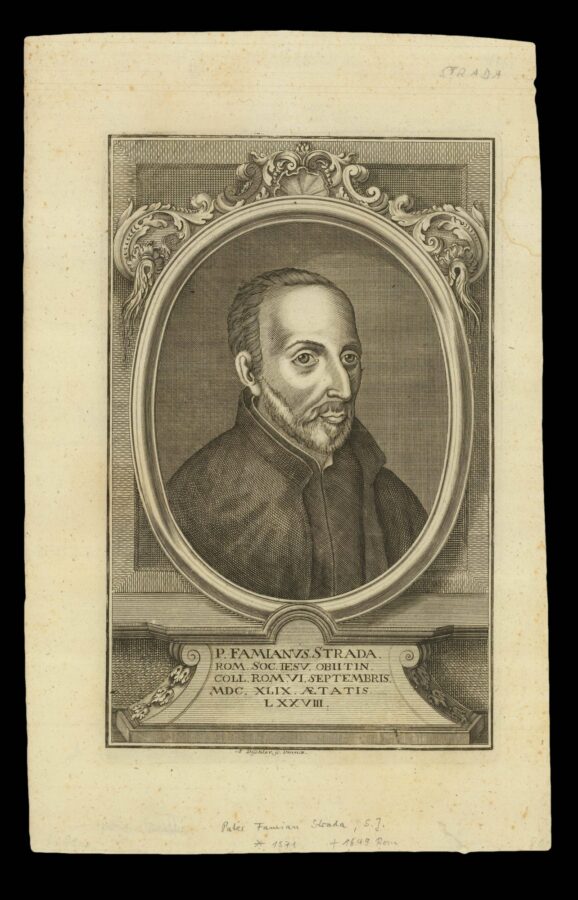 Famiano Strada (1572–1649) was a Jesuit priest and historian whose partiality resulted in fierce opposition and criticism from many of his contemporaries. In 1617, Ranuccio I Farnese, Duke of Parma, commissioned Strada to write a history of the ongoing war in the Netherlands, which would later come to be known as the Eighty Years’ War. In order to write this history, Strada was given access to the private archives of the House of Farnese, meaning that he could consult a wide range of sources such as letters written by princes, instructions to ambassadors, and notes by spies. ​‘De Bello Belgico’ was often illustrated with the famous ​‘Leo Belgicus’ map. The work consisted of two volumes, with the third having been supressed by Spanish authorities.

​‘De Bello Belgico’ was translated into several other European languages in the subsequent decades, with the French ​‘Histoire de la guerre des Païs-Bas’ appearing in 1727. The present portrait, made by AE Dischler and published in Vienna during the mid-eighteenth century, was included in later editions of this French translation. It shows the bust of Strada simply dressed in an oval frame set on a plinth, on which his position and date of death are recorded in French.