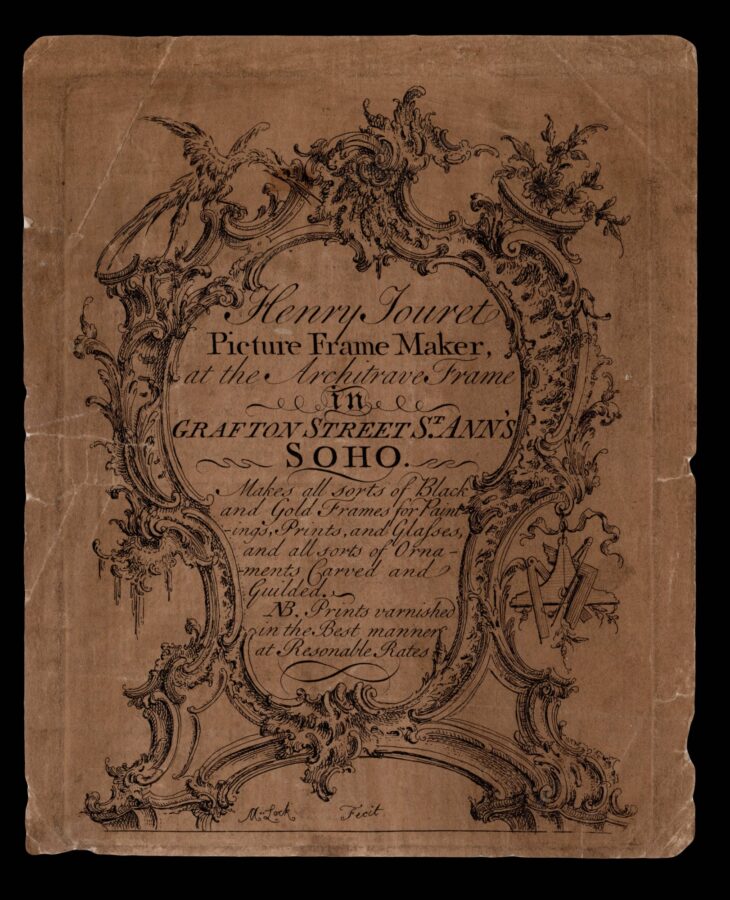 F is for Framer

Henry Jouret Picture Frame Maker at the Architrave Frame… Makes all sorts of Black and Gold Frames for Paintings, Prints, and Glasses, and all sorts of Ornaments Carved and Guilded. – N.B. Prints varnished in the Best manner at Reasonable Rates.

An elaborate asymmetrical rococo cartouche adorned with the tools of Henry Jouret’s framing trade surrounds details of the services he offered. A near identical trade card (Heal 100.44) indicates that Jouret subsequently operated at the ​“Gold Frame, the middle of Maiden Lane, Covent Garden”.

Although the engraver is anonymous, it is very similar to a trade card for Thomas Harper, ​“copper plate printer”, engraved by J. Evans after a design by Matthias Lock (fl 1740–1769), who published a book of ornaments in 1740.

Henry Jouret or Jourett (fl1750-1805), ​“was noted as a framemaker by the engraver, George Vertue, in one of his notebooks in or after 1751 (British Library, Add.MS 23096). However, few frames by this presumably Huguenot maker have been documented. Jouret was paid by Lord Monson for a pear-tree looking glass frame in 1755. He worked for the artist, Richard Crosse, 1775–7, being paid £5.5s for framing and packing Dr Wright’s picture in January 1775, £4.1s for two oval glasses etc in October 1777, as well as other small amounts for picture framing (V&A National Art Library, MSL/1929/2154, 2188). Jouret has sometimes been identified with Henry Joris, who worked with Paul Petit to produce frames for Frederick Prince of Wales in 1739 but this seems unlikely” (National Portrait Gallery online).