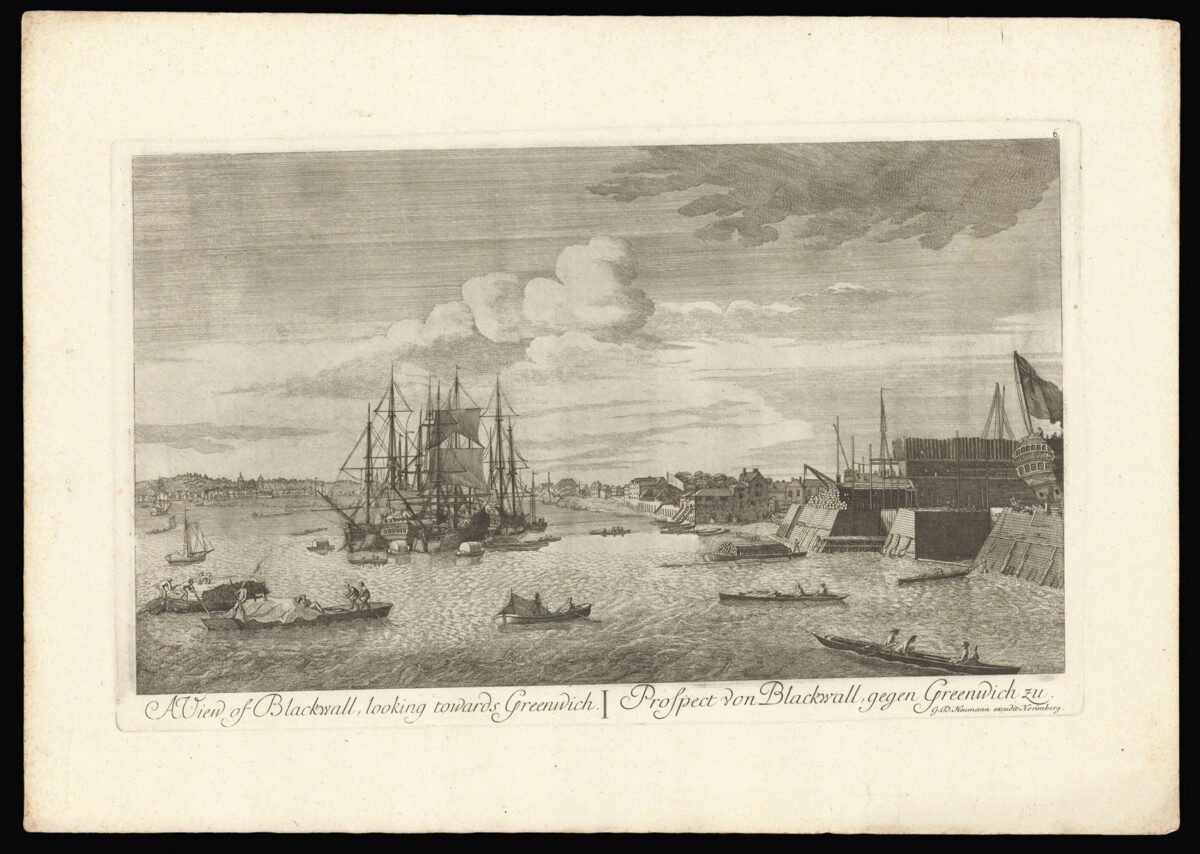 Eight views from a member of the Nuremberg Academy

Blackwall was an important shipping area in the Port of London.

- Martin Frobisher’s voyage to find the Northwest Passage began from Blackwall — and a key shipyard. A ship under construction is visible to the right of the print. Although business had declined in the early eighteenth century, Britain’s involvement in the War of Jenkins’s Ear and then the Austrian Succession revitalized business. It would be the largest private shipyard in the world by 1784.

Shepperton was still an agricultural village, attracting writers and artists including Percy Shelley and Canaletto, who were inspired by the peaceful surroundings and the Thames.
The Tower was no longer a royal residence when the print was made. The last monarch to stay there was Charles II before his coronation in 1660. It had become an armoury and house for court officials, although under the Hanoverian monarchs it was being gradually refortified amongst fears of a Scottish rebellion.

Limehouse was a newly created parish in east London. It was reliant on the river trade, as shown by the wharves and docks along the bank. Greenwich Hospital was built on the orders of Mary II, who wanted to create a counterpart to the hospital for soldiers at Chelsea. Sir Christopher Wren, Nicholas Hawksmoor and Sir John Vanbrugh all worked on the design, providing their services for free. The hospital was split into two distinct parts to preserve the river view of the Queen’s House in the background. It was lavishly built and decorated, including the famous Painted Hall, which took James Thornhill 19 years to complete and earned him a knighthood.

London Bridge is shown before the buildings on it were demolished for safety reasons. The artist is looking out from St Olave’s Church, dedicated to an early Christian King of Norway and ally of Ethelred the Unready. There was a small dock next to the church that disappeared around this time, although the landing place, or St Olave’s Stairs, survived for another century.

Much of Battersea and Chelsea was still farmland at this time, providing food for the city, although there had been some industrial cloth development.

Woolwich was an important river crossing — the landing stage and ferry is visible to the right. The Royal Arsenal and Woolwich Dock are on the same bank.

Georg Daniel Heumann (1691–1759) was a German engraver and printmaker. He was engraver to the University and court of Göttingen. 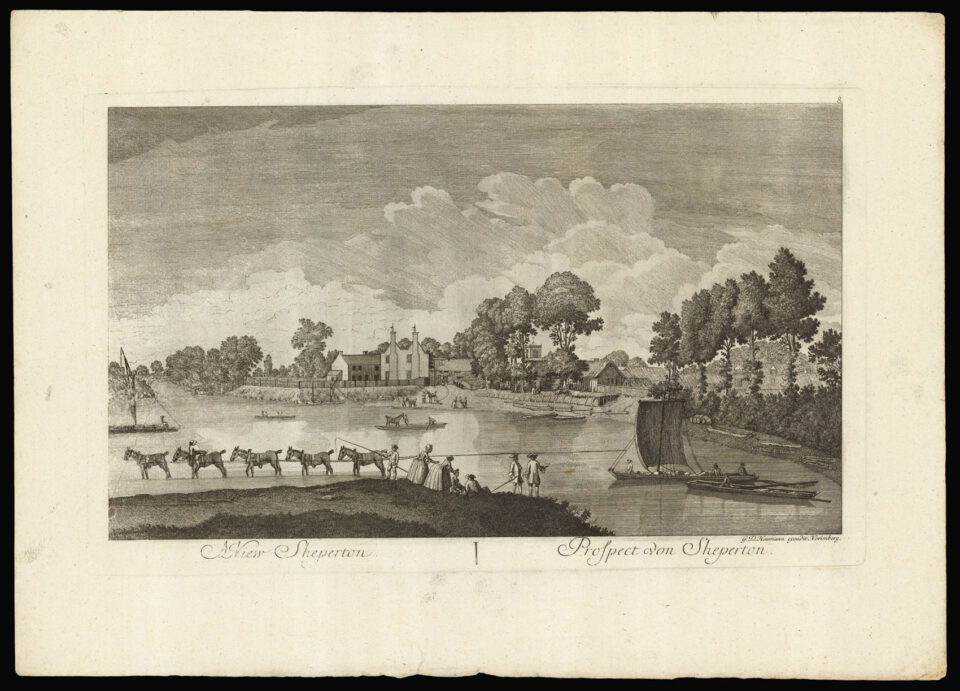 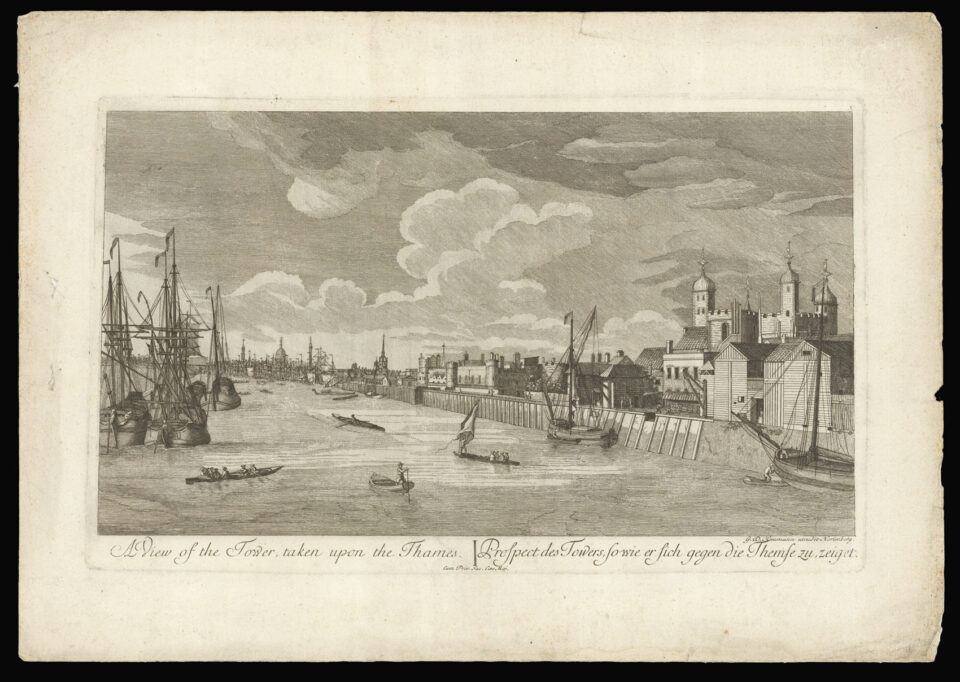 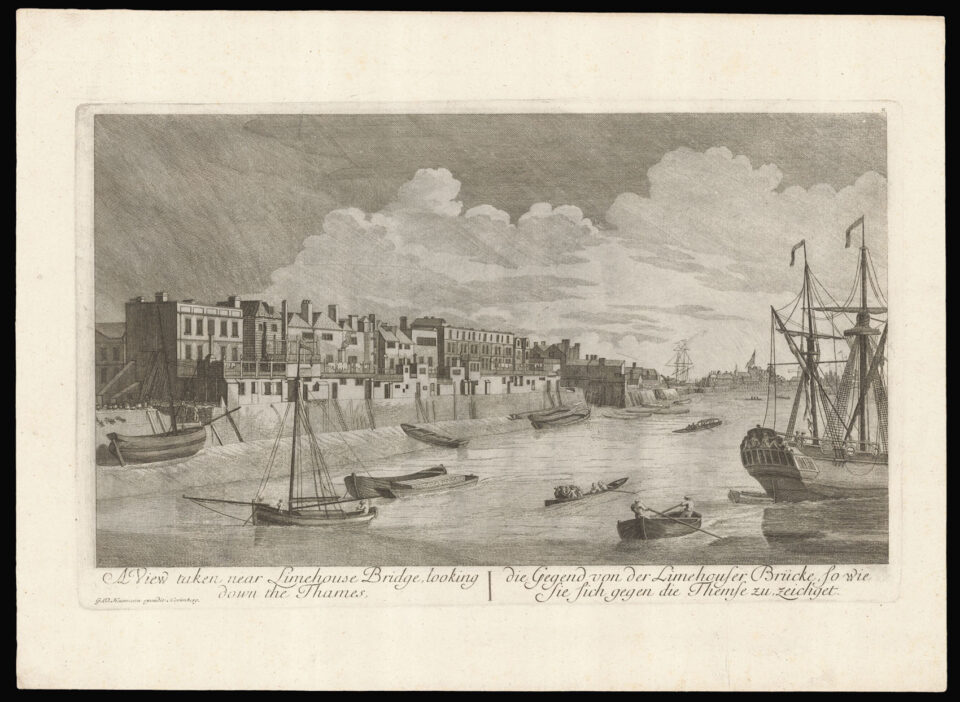 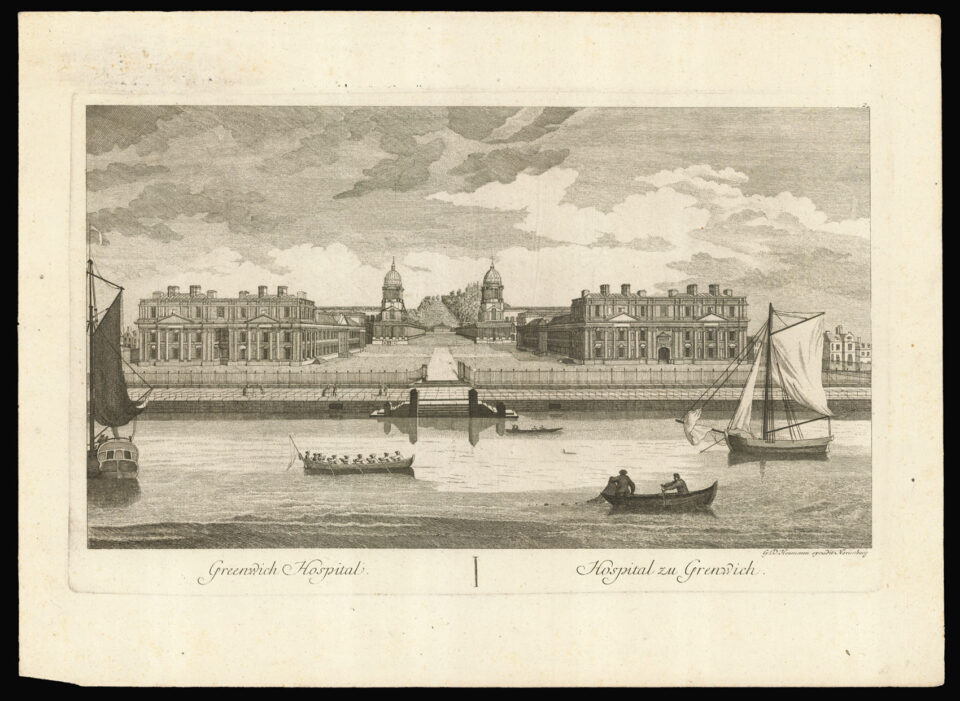 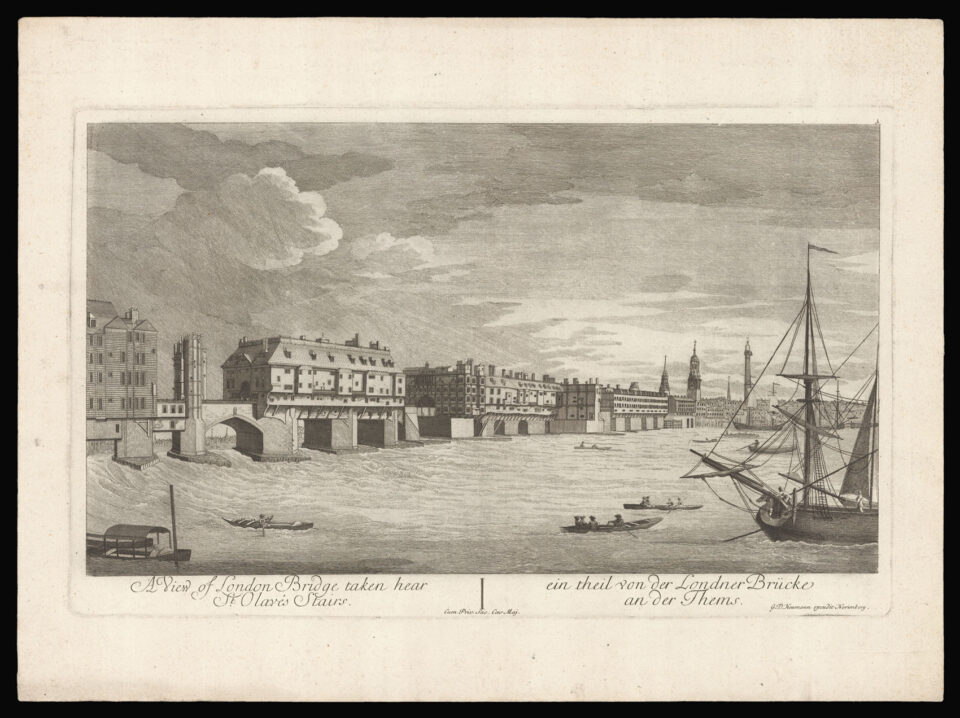 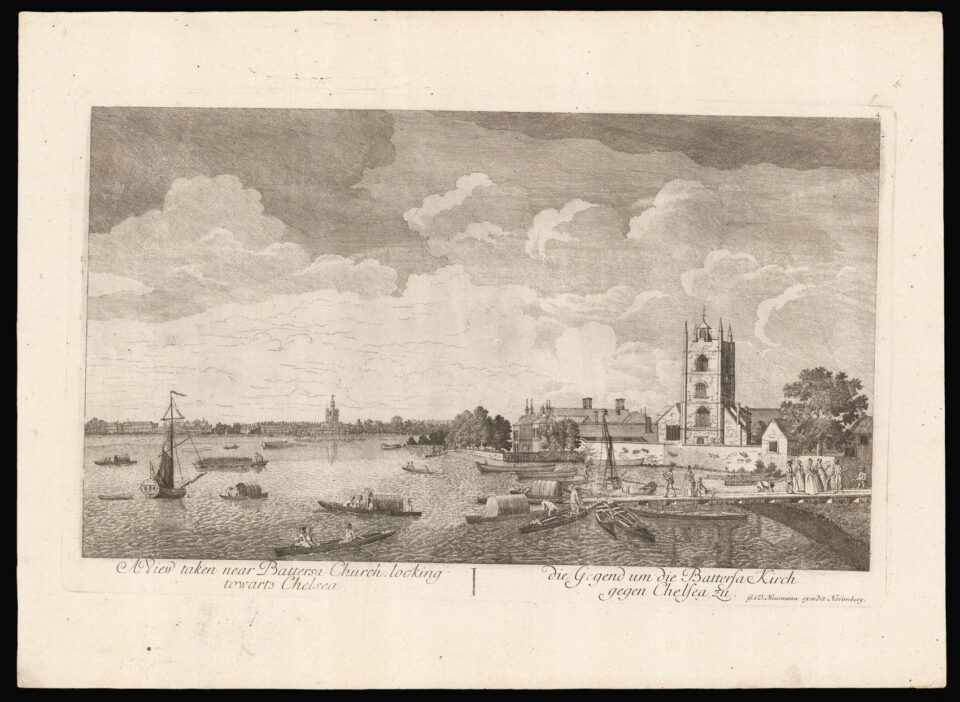 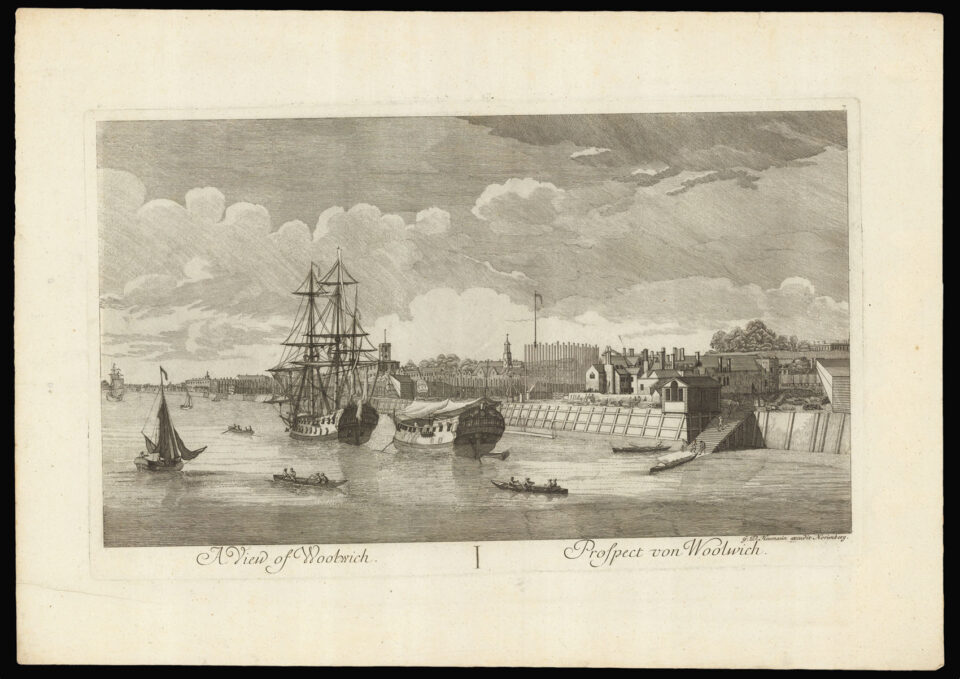