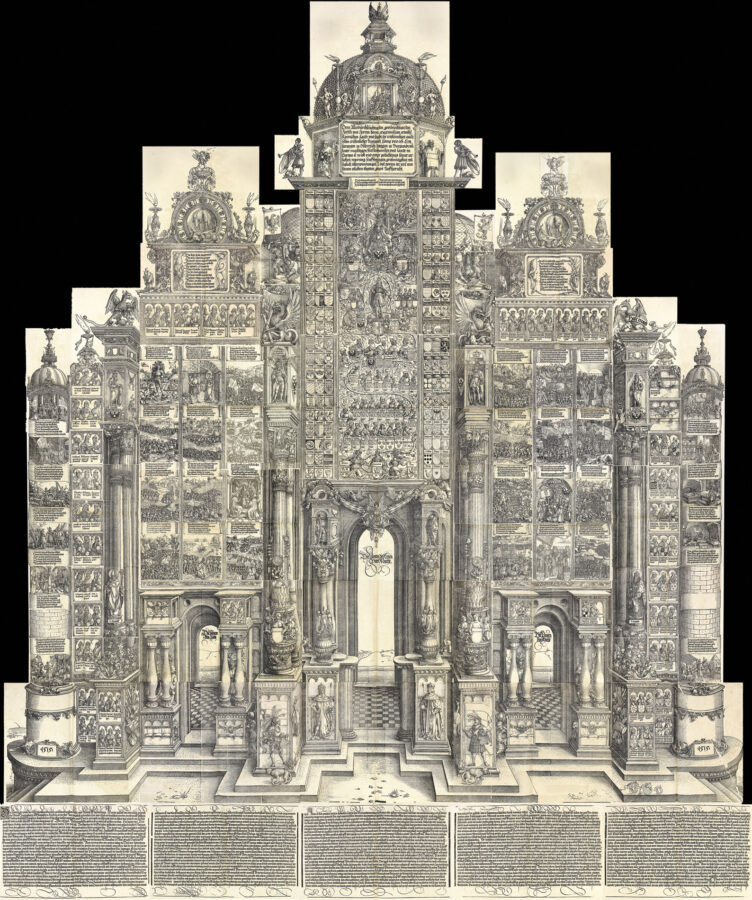 A very good set of the two monumental woodcut series produced in celebration of the achievements of Maximilian I.

The ​‘Triumph’ and the ​‘Triumphal Arch’ of Maximilian I are both printed from the original 16th-century blocks, now preserved at the Albertina Museum, Vienna. Both works were intended for assembly, the first as a grand frieze extending to 54 metres, the second as a gigantic wall print measuring approximately 3.5 x 3 meters (11 x 9 feet).

Andrea Mantegna had started the print-making fashion for pictorial compositions in multiple scenes. Maximilian, an impulsive, generous and patriarchal ruler, conscious of the grandeur of the Hapsburgs but constantly short of money, had no funds to hold a triumphal procession or erect a triumphal arch in stone. His place in the imperial Roman tradition was nevertheless guaranteed through the truly monumental scale of these purely imaginary compositions on paper.

The ​‘Triumphal Procession’ was printed from staggeringly large blocks cut between 1516 and 1519, and first published in 1526 at the order of the Archduke Ferdinand. Another edition was published in 1777 from blocks discovered at Ambras and Graz. This third edition of 1796 reunited all the surviving blocks, and was the first to include the original programme written by Treitzsaurwein (1512) in accordance with the emperor’s instructions. With this as a guide, the imagined triumph was first depicted in miniatures painted on vellum by Altdorfer and his pupils. Not only Burgkmaier, but Altdorfer, Beck, Springinklee, Schäufelein, Huber and Dürer transferred these designs to woodblocks. The 67 blocks designed by Burgkmaier are nos. 1 — 56, 109 — 112, 122 — 124 and 132 — 134. Dürer contributed one woodcut on two blocks: known as the ​‘Small Triumphal Chariot’, this celebrated the decisive event in the emperor’s life, his marriage to Mary of Burgundy. One of the two blocks, showing winged Victory holding the reigns, is printed as the last cut in Bartsch’s edition (135); the other is one of only three or four blocks that have been lost.

Key information about the 135 blocks used is derived from the name of the cutter on the reverse and the date on which the block was delivered. Hieronymus Andreä, Jan de Bom or Bonn, Hans Franck, Cornelius and William Liefrinck, Alexius Lindt, Jost de Negker, Wolfgang Resch, Jakob Rupp, Claus Seman and Jan Taberith were the cutters concerned. The manuscript table of names, so usefully inserted in this copy, records the inscription on the back of each block, and even reproduces a number of signatures in facsimile. At the end it is explained that: ​‘Lors de ce travail plusieurs de ces inscriptions ont été effacées par le saleté inévitable du noir de l’imprimerie … ‘. The table may therefore provide information no longer fully recoverable from the blocks themselves.

The ​‘Triumphal Arch’ (more properly ​‘Arch of Honour’), the complement of the ​‘Triumphal Procession’, was originally conceived by the Tyrolean court painter and architect, Jörg Kolderer, as a miniature. Under the direction of the Emperor, Johannes Stabius provided the programme of the whole arch and the five sheets of prose commentary at the foot. Dürer supervised the execution of the multi-block print and also contributed ornamental details (cf. Strauss p. 504). The 192 blocks of varying size were cut in the workshop of Hieronymus Andreä in Nuremberg. Although probably conceived in 1512, the project was not completed until August or September 1517, despite the date of 1515 on the base of the arch. A large part of the design was the work of Dürer’s assistants, Springinklee and Traut.

The arch is divided into three portals, ​‘Fame’ and ​‘Nobility’ flanking the centre-gate of ​‘Honour and Might’. The mid-section of the edifice is reserved for the genealogy of the House of Hapsburg, and includes 57 heraldic shields. Twenty-four panels above the two minor portals depict Maximilian’s political history, while the two flanking turrets, whose design is attributed to Altdorfer, celebrate Maximilian’s accomplishments. These include his ability to speak seven languages, his prowess in the chase, familiarity with artillery, and his presentation of a Chapel to the Order of St. George. The arms of Kolderer, Stabius and Dürer appear in the bottom right hand corner of the woodcut.

Editions were published in 1517 — 1518, 1526 — 1528, and 1559. This fourth edition of 1799 was printed from the 174 surviving blocks, with 18 etchings by Bartsch supplying the place of those lost; the Dürer block of the Burgundian Wedding was replaced by an earlier block of Springinklee. The ​‘avis au relieur’ at the end is, in fact, a ground plan showing how this unique arch should be assembled. 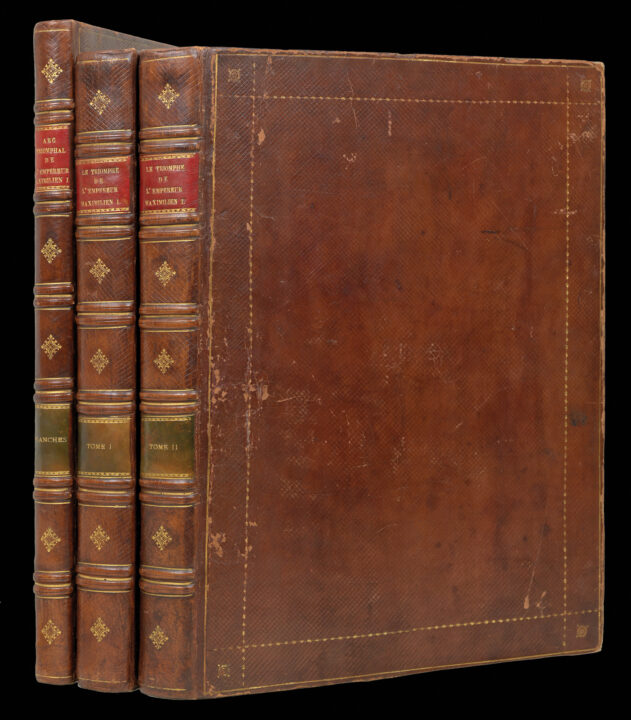