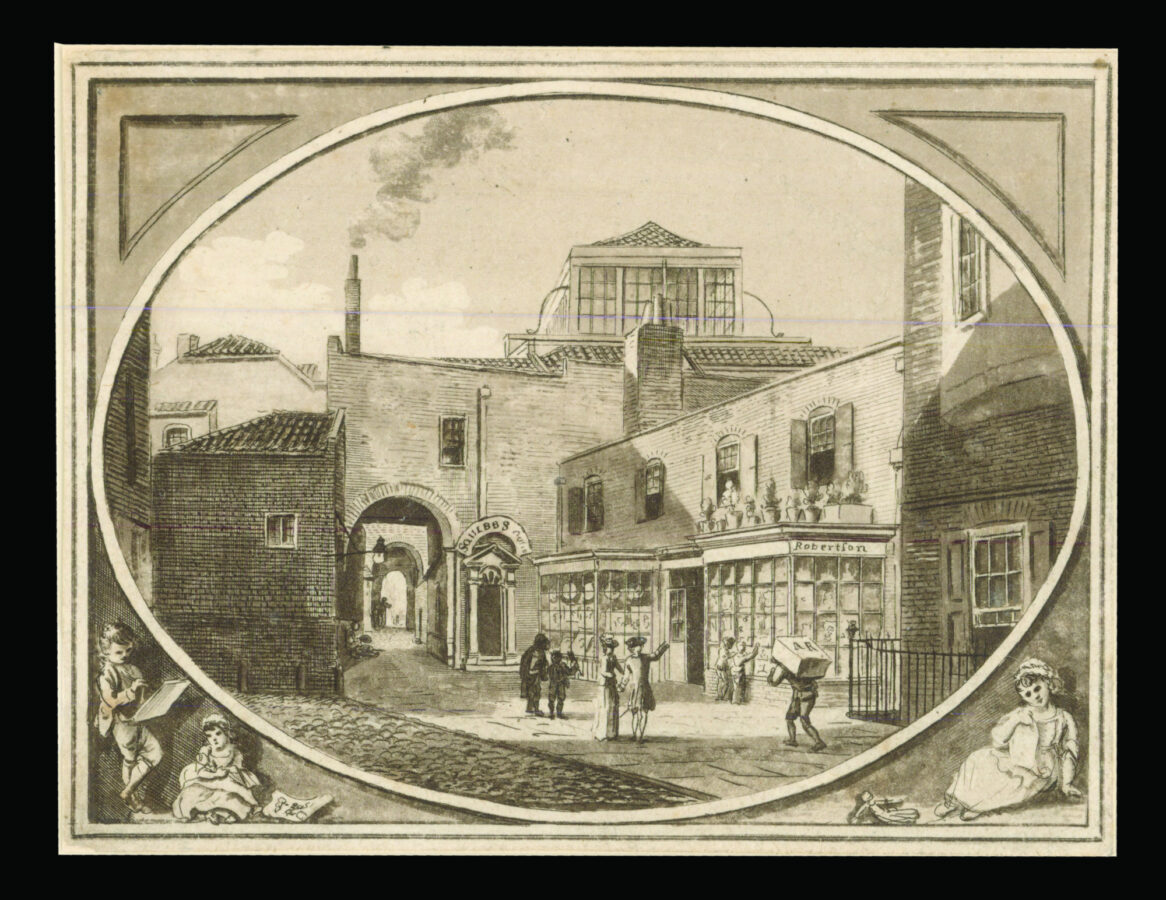 By ROBERTSON, Archibald; and Paul SANDBY, 1777

A vignette for the trade card of Archibald Robertson, drawing master of ​“Savill Row Passage”, later ​“Savile Place”, demolished in 1936 to make way for a wider continuation of Savile Row to Conduit Street. The oval vignette is a fine aquatint view of the top end of Savile Street with Robertson’s shop to the right, showing the arched passageway which led to Mill Street and then on to Conduit Street, by Paul Sandby.

Robertson (fl 1777–1796) held premises at the entrance to Savile Row Passage until 1782, when he moved to 15 Charles Street, St. James’s. Known as a landscape painter, his first aquatints were printed in 1777 and were jointly published with Paul Sandby, who lived over Robertson’s shop and may have tutored him in the art form. James Squib, auctioneer occupied 22 and 23 Savile Row Passage from 1777–1788, and ​“Squibbs Aucti…” appears above the archway, with the large glass lantern that illuminated their rooms above and to the right. The space was possibly then sublet by Lord Barrymore for use as a private theatre, before George Squib continued the family auction business well into the nineteenth century.

Paul Sandby (c1731-1809), was a well-known watercolourist, printmaker and collector. Born in Nottingham, in 1745 he joined his brother Thomas Sandby at the Board of Ordnance and took part in the survey of the Scottish Highlands after the Jacobite Rebellion. From the 1750s he was based in London, and influential in the campaign to found the Royal Academy. In 1768, he was appointed drawing master to the Royal Military Academy at Woolwich. He made a number of satirical etchings, notably against Hogarth in 1753–4 and the early 1760s. He often collaborated with Thomas Sandby in providing figures for his topographical watercolours. Much later, in the mid 1770s, he turned his hand to the art of aquatinting, when he is associated with Robertson, issuing a series of aquatints of Wales from 1775–1777. His private collection [Lugt PS in a square] was sold at Christie’s on the 17 March 1812.