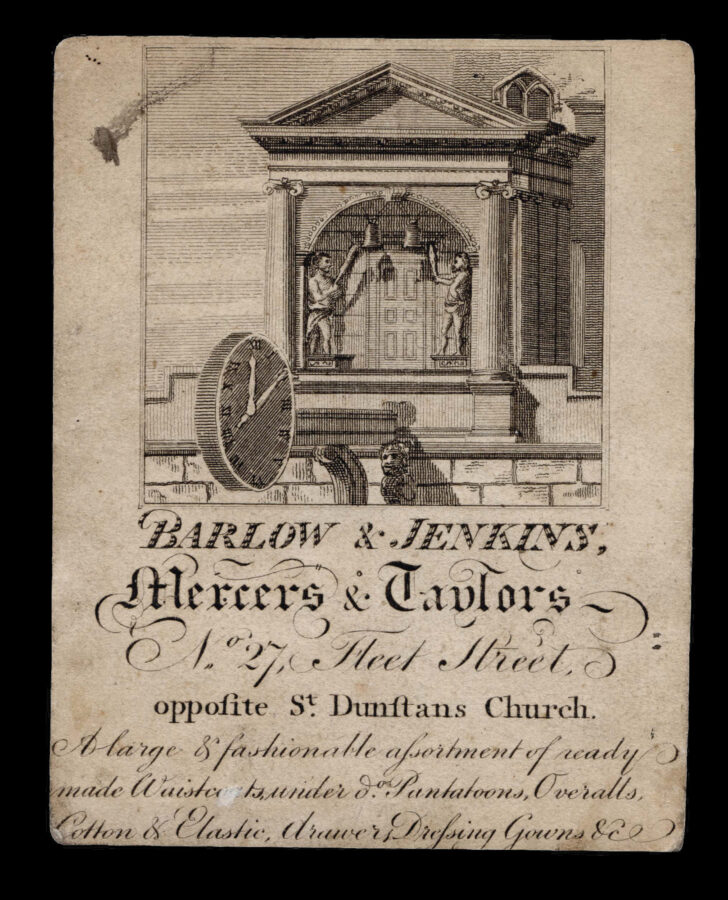 D is for Draper

Trade card for Barlow & Jenkins, tailors and mercers of 27 Fleet Street, London. In ​‘Kent’s Directory’ of 1803, ​“Barlow & Hopkins, Drapers & Mercers, 27, Fleet-street” are listed, while ​‘The Post-Office Annual Directory for 1812’ names only Thomas Jenkins at the premises. Given the similarity in the names, it is quite possible, even likely, that ​‘Hopkins’ is a misspelling of ​‘Jenkins’, the result of a communication or chirographical error. This suggests that the partnership between Barlow and Jenkins may have broken up some time between 1803 and 1812, with the latter continuing the business on his own.

The premises appear to have been used as a tailors shop from around the turn of the nineteenth century, with ​‘Wakefield’s Merchant and Tradesman’s General Directory for London’ of 1793 listing 27 Fleet Street as the address of a bookseller named Edward Beetham. The business continued by Jenkins then appears to have closed or moved before 1928, as ​‘Pigot and co.‘s national commercial directory’ for that year records another occupant.

Although there is little information available about the Barlow and Jenkins tailoring company, it is remarkable that their trade card lists ​“elastic” as one of the materials used in their work. Rubber, a key component in elastic material, a rare commodity at the beginning of the nineteenth century; in 1820, Thomas Hancock would patent an elastic product used for to fasten gloves, suspenders and stockings, but it was not until the twentieth century that elastic became a common feature in clothes. Illustrating the upper-half of the trade card. Is an engraving of what is presumably Barlow and Jenkins’ shop sign, showing a clock and a miniature architectural representation of a portico containing two bell-ringers. 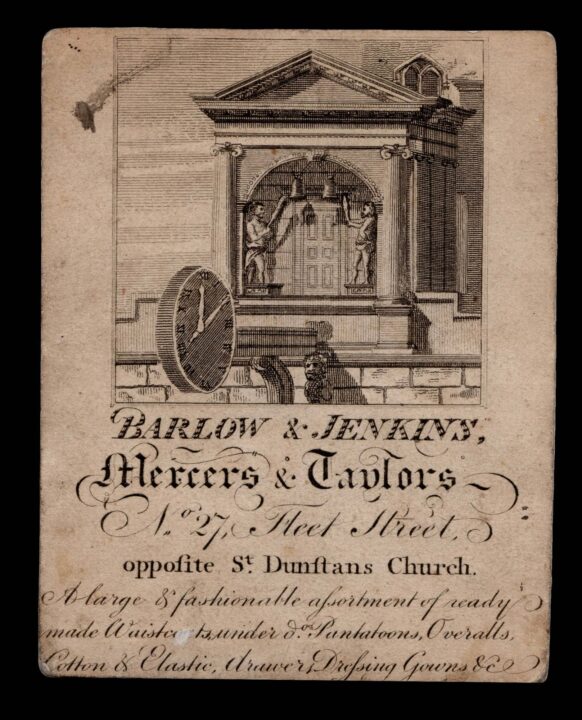