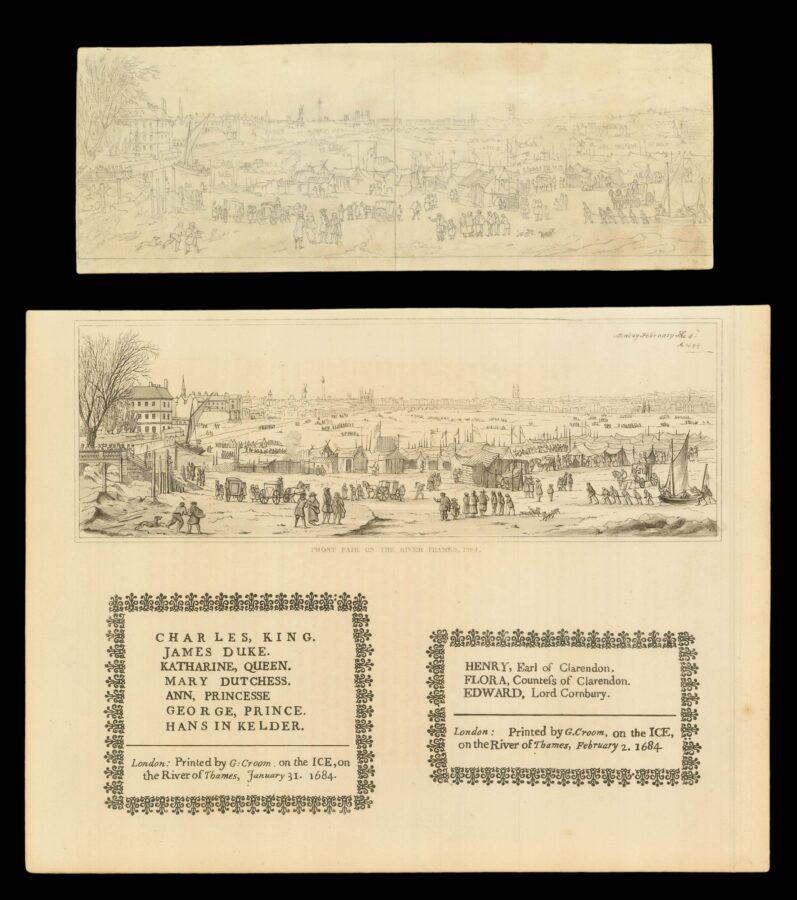 Commemorative drawing of the 1683/4 Frost Fair

John Mayle Whichelo’s (1784–1865) drawing of the Frost Fair on the frozen River Thames of 1683–84 is after the scene first painted by Dutch draughtsman and painter Jan Wyck (1652–1700), now present as part of the Crace collection at the British Museum. It shows the fair from the north-west, near the Temple Stairs. Many stalls, tents and other constructions appear on the ice, with crowds of people wandering between them, as well horse-drawn carriages and carts. On the right, men pull a boat over the frozen surface of the river. London Bridge is visible in the background, as are numerous buildings, great and small. Wyck’s image was also published as an engraving by James Stow in 1825.

Whichelo’s published lithograph of the scene appears above facsimiles of the souvenir tickets that George Croom printed on the frozen river on January 31st and February 2nd of 1684. Each ticket cost 6d, but Croom was said to be making £5 a day from his venture, which was at least ten times a labourer’s wage. King Charles II brought one when he and his family visited the fair, and listed on the ticket from January 31, 1684, are the names of those included in the royal party:

​“Hans in Kelder” is in fact not a name, but a toast frequently drunk to the health of pregnant women, in this case to the King’s pregnant niece, Princess Anne, who would later become Queen Anne.

The ticket for the 2nd of February records the visit to the fair of ​“Henry, Earl of Clarendon, Flora, Countess of Clarendon [and] Edward, Lord Cornbury”.

Whichelo is best known as a marine painter ​“who made studies of the channel coasts in England, and to a lesser extent the Netherlands and Belgium, as well as of the harbours and dockyards of his native land. But he was also a landscapist and an art teacher, and he spent his early career as a topographer in London” (Mark Pottle for DNB).