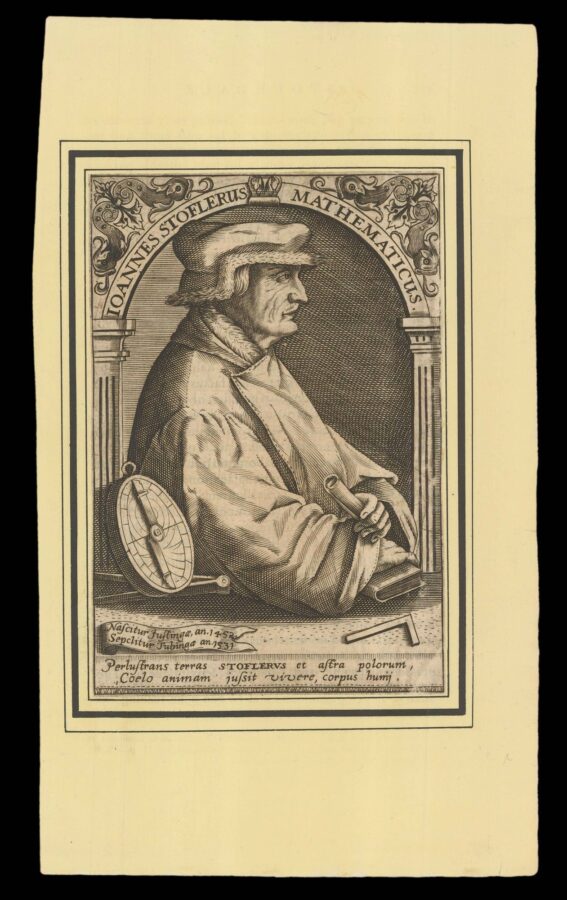 Claudius Ptolemaeus, or Ptolemy was a second century AD Greco-Roman scholar, most famous for the three works he produced on astronomy, geography and astrology. Almost nothing is known of Ptolemy’s life save that he lived in Alexandria, and was a Roman citizen. His first book, the ​‘Almagest’ was an astronomical text based on a theory of a geocentric universe. He wrote his most famous work, the ​‘Geographia’ (c150 AD), using an atlas by Marinus of Tyre as the foundation, and adding information from Roman, Persian and Babylonian sources. Intended as a supplement to the ​‘Almagest’, it became a synthesis of classical geographical knowledge from the millennium; Ptolemy collated and compared every text he could lay hands on. Although the ​‘Geographia’ gives instructions for the construction of maps, it is unclear whether the original manuscript versions of the text contained any. The first modern printed edition with maps was not published until 1477 in Bologna.

In 1598, Ptolemy’s portrait, obviously improvised, was engraved by Theodore de Bry as part of his portrait gallery of notable figures. De Bry’s Ptolemy has a notably large nose and square beard, and is wearing a flat cap. The same portrait was later replicated by a Parisian engraving firm, as in the present example, which shows Ptolemy set within an oval frame atop a plinth on which he is identified and the following lines of text are given: ​“Le fameux ecrivain qu’a bon droit l’on renome, / Geographe, grand Astronome, / Guide son lecteur curieux, / Et sur la Terre et dans les Cieux”.