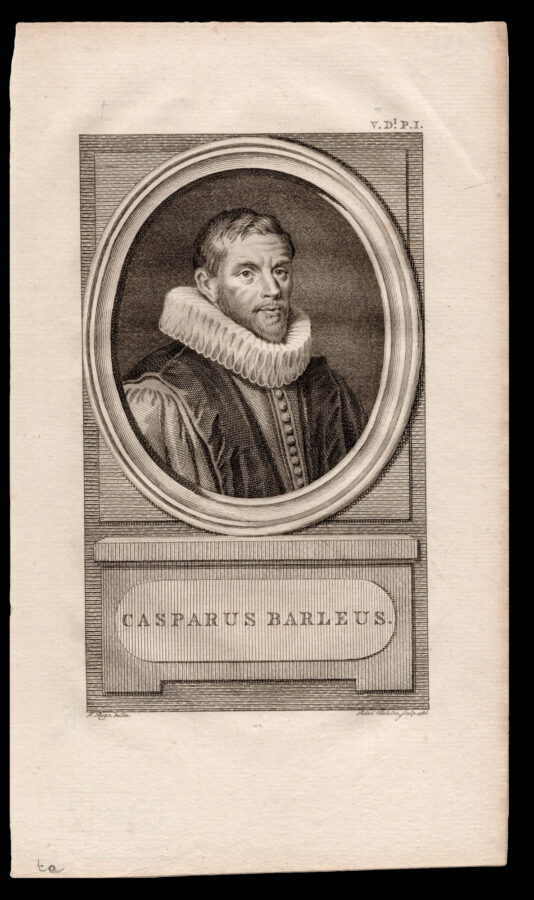 Caspar Barlaeus (1584–1648) was a Dutch physician and Professor of Logic at the Univeristy of Leiden, who was, however, best known for his poetry and work with the most prominent Dutch map publishers of the day. In 1622, he wrote a eulogy to accompany a portrait Willem Blaeu and in the same year translated Antonio de Herrera’s Description of the West Indies; in 1627 he provided the text for Jodocus Hondius’ miniature atlas of Italy; and in 1647 he wrote an account of Dutch colonial empire in Brazil, containing numerous important maps and plates of the region.

In the late eighteenth century, Barleus’s portrait was drawn by Jacob Buys and engraved by Reinier Vinkeles based on an earlier image from 1625 that had been drawn by David Bailly and engraved by Willem Jacobsz Delff. It shows Barlaeus in three-quarter perspective wearing a huge ruff and his academic gown and it appeared in a 28-volume Dutch dictionary edited by Jacobus Kok from 1780 to 1799.