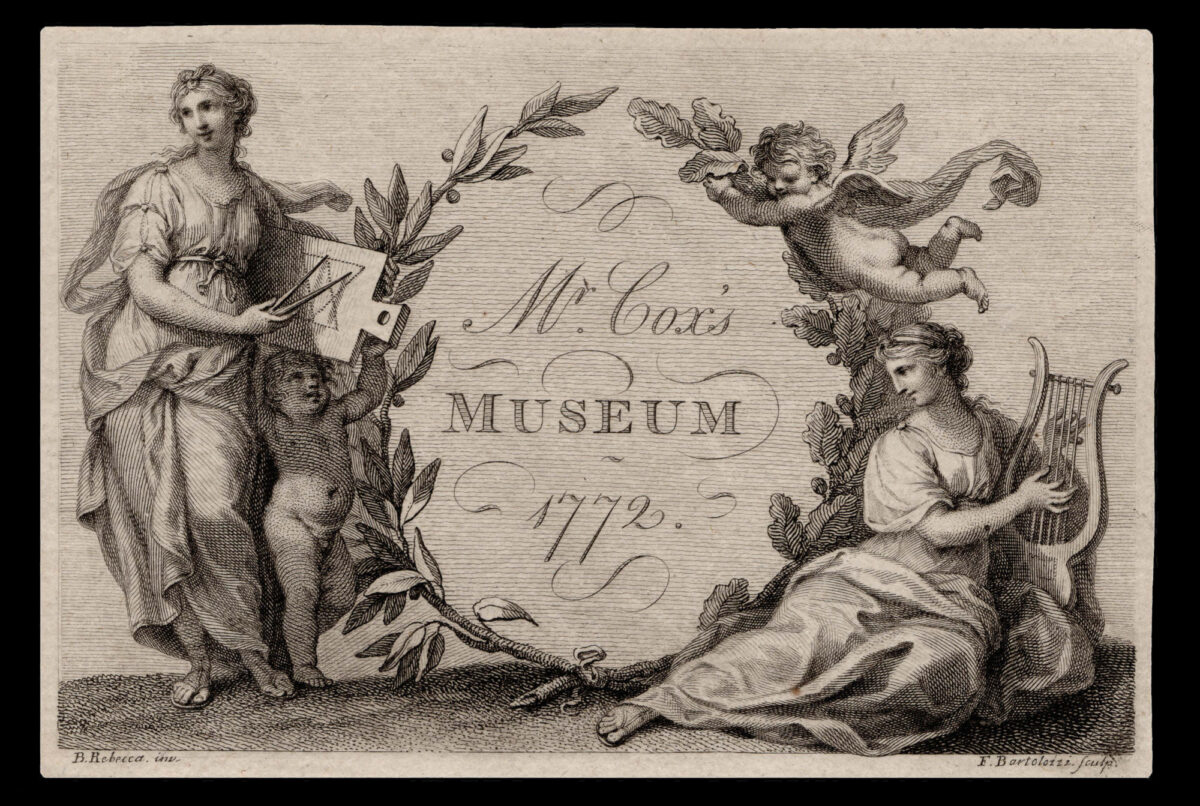 C is for Curator

James Cox, London jeweler, watchmaker and manufacturer of ​“expensive automata that had a great vogue in China. Opened a museum of his productions in Spring Gardens in early 1770s. Whole contents disposed of by lottery in 1774 (for which a printed prospectus was issued)” (BM). His elegant trade card, depicting putti and divine muses,engraved by Francesco Bartolozzi (1727–1815) after a drawing by Biagio Rebecca (1735–1784)coincides with the opening of his museum in February of 1772

Cox is best known for his extravagant musical clocks, made under the supervision of John Joseph Merlin (1735–1803), his chief craftsman, and his Museum. ​“The possibility of a lottery may already have been in Cox’s mind in February 1772, when he opened his museum in the lavishly refurbished Great Exhibition room in Spring Gardens, Charing Cross, in central London. The museum had originally been planned as a way of publicizing articles destined for export, and was on a grand scale, including twenty-two spectacular automata ranging from 9 feet to 16 feet high. In spite of the substantial entry fee of half a guinea, the museum immediately became one of London’s fashionable sights. Dr Johnson recommended it to Boswell soon after it opened: ​‘For power of mechanism and splendour of show’, Johnson told him, it ​‘was a very fine exhibition’ (Altick, 69). Boswell agreed, though some visitors regretted the lack of ​‘utility’: in Evelina (1778) Fanny Burney’s heroine observed that the museum was ​‘very astonishing, and very superb; yet, it afforded me but little pleasure, for it is a mere show, though a wonderful one’ (ibid., 70). In spite of its popular success the museum could not resolve Cox’s financial difficulties and after a year he petitioned parliament for permission to dispose of its contents by lottery” (Roger Smith for DNB).

Heal writes: ​“Some account of Cox’s Museum is given in MacMichaels ​‘Charing Cross’ pp.26 & 291. In 1781 the Museum was in Spring Gardens. Later this gallery was Wigley’s Auction Rooms. The contents of Cox’s Museum in Spring Gardens were dispersed in a Lottery in 1773. An elaborate catalogue or ​‘Inventory’ of 45 pages was issued describing all the lots in great detail. A transcript of this catalogue is on the back of this mount. James Cox carried on a jeweller’s business at No.103, Shoe Lane 1757–1777”.

Few of the more opulent automata made by Cox’s workshop survive, but they include the elaborate Swan now in the Bowes Museum, and the Peacock clock in the Hermitage Museum, St Petersburg.

Bartolozzi, renowned Italian engraver and etcher, who worked in London from 1764. He was a founder member of RA in 1768, and purchased a large house in Waltham Green, North End, Fulham in 1780 where he set up an engraving factory of pupils and employees. In 1802 he fled to Lisbon in financial distress, where he remained for the rest of his life. 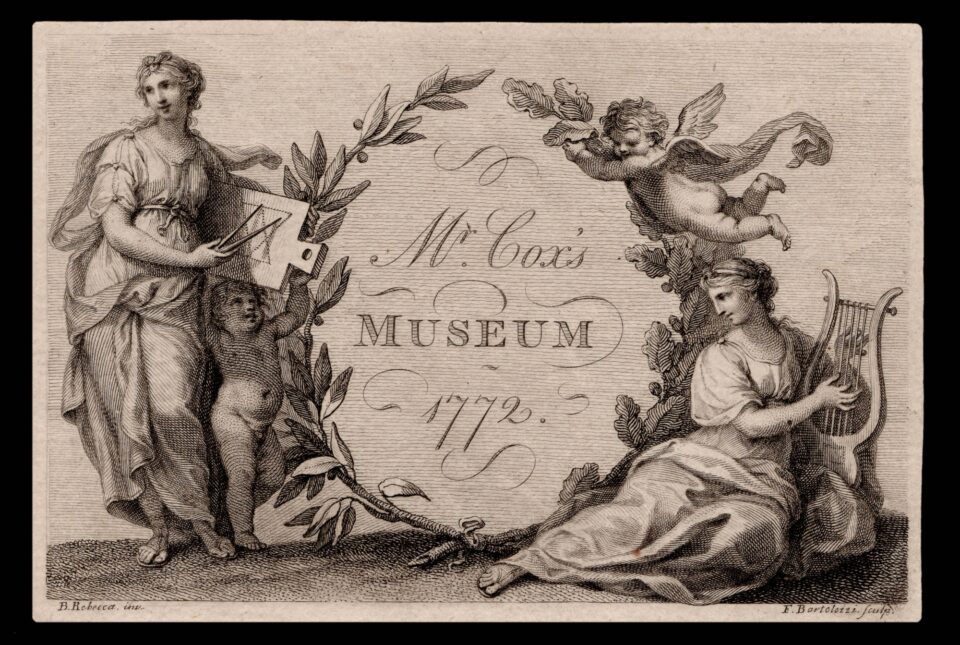