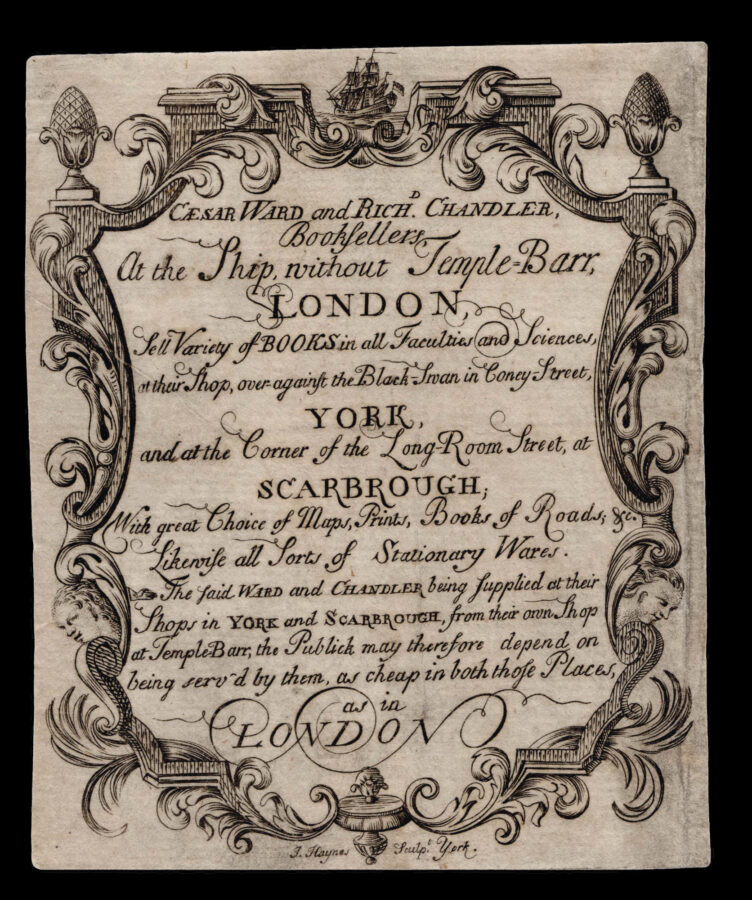 Booksellers of York and Scarborough

Cesar Ward and Rich.d Chandler, Booksellers, … Sell Variety of Books in all Faculties and Sciences, at their Shop, over-against the Black-Swan in Coney-Street, York, and at the Corner of the Long-Room Street, at Scarbrough; With great Choice of Maps, Prints, Books of Roads; &c. Likewise all Sorts of Stationary Wares. The said Ward and Chandler being supplied at their Shops in York and Scarbrough, from their own Shop at Temple-Barr, the Publick may therefore depend on being serv’d by them, as cheap in both those Places, as in London

Engraved by J. Haynes of York, the cartouche bears two portraits, probably of Ward and Chandler themselves. Chandler (c1713-1744), was the son of Robert Chandler (c1671-1726), periwig maker and freeman of the Barber–Surgeons’ Company, of Carey Street, London. ​“Chandler was apprenticed on 7 November 1727 for a premium of £49 10s. to the bookseller John Hooke whose shop was at the sign of the Fleur de Luce near St Dunstan’s Church in the parish of St Dunstan in the West, Fleet Street, London. It may have been about this time that Chandler met Caesar Ward (1710–1759), later his business partner, for Ward was apprenticed at the same time to another bookseller in that parish, Robert Gosling. Hooke died in September 1730 before Chandler could complete his apprenticeship. Chandler was freed by patrimony in the Barber–Surgeons’ Company on 3 December 1734 (and must have been at least twenty-one at that date) and was made a liveryman of the company in 1737. However, in May 1732 he announced that he was taking over his former master’s business and moving to a location ​‘without Temple Bar’.

Four months later Caesar Ward was freed and began business at the sign of the Ship, between the Temple Gates, Fleet Street. Within a year Ward and Chandler were publishing partners and had shops in Scarborough as well as in London; a few years later they added a third shop in Coney Street, York” (C.Y. Ferdinand for DNB).

In 1742, Chandler branched out on his own with an ambitious project to compile and publish ​‘The History and Proceedings of the House of Commons from the Restoration to the Present Time’. Bankruptcy and tragedy followed, and Chandler committed suicide in 1744. 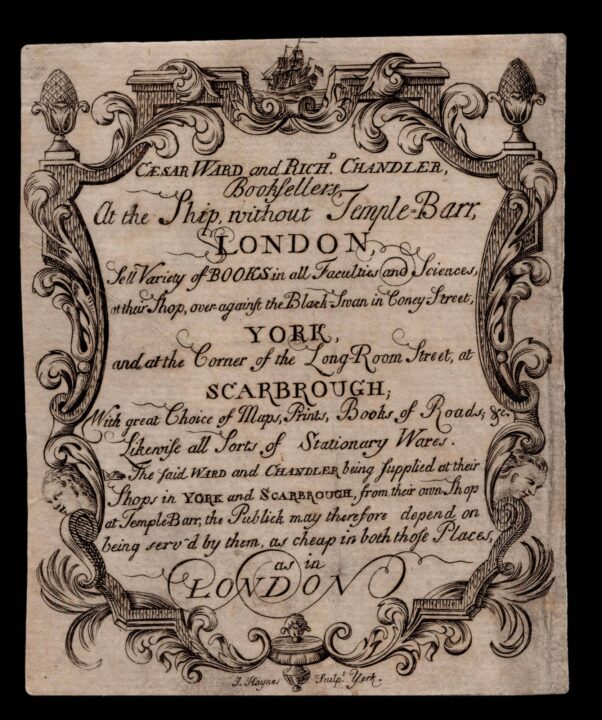