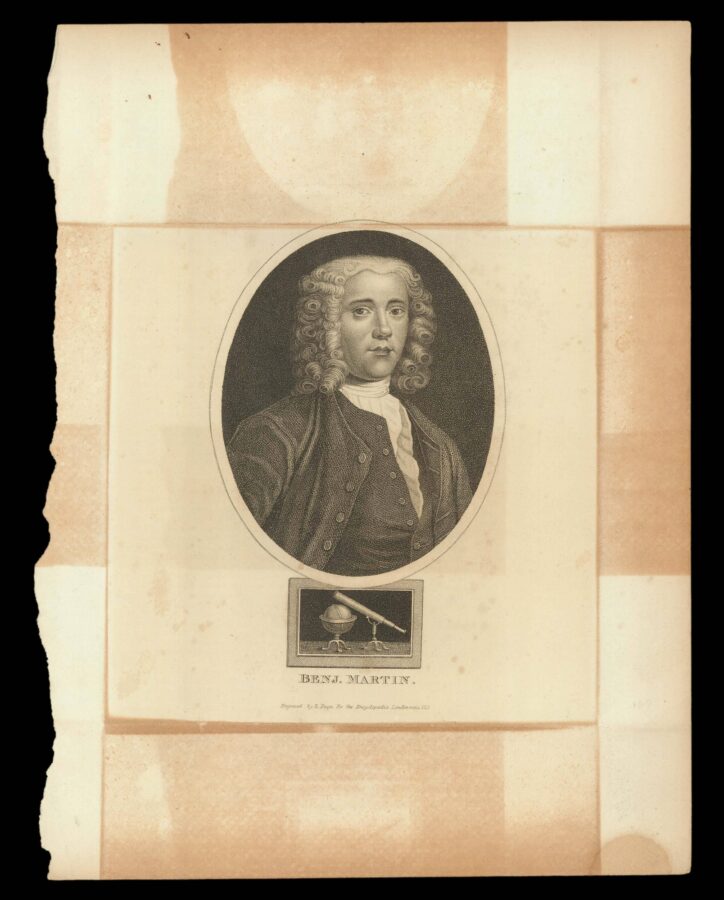 Published between 1801 and 1828 in 24 volumes, three of which were of copperplate engravings, the ​‘Encyclopedia Londinensis, or, Universal dictionary of arts, sciences, and literature’ was the work of English bookseller, printer and editor John Wilkes. Alongside articles on history, geography and nature, the encyclopedia also contained a great deal of information about important English figures; included in thirteenth volume, published in 1815, was a portrait of and article on Benjamin Martin (1705–1782).

After establishing his own school as a young man, Martin started to write books on natural philosophy aimed at a general audience, thus setting into motion a prolific career during which he published works on natural philosophy, theology, mathematics, language and geography. By 1738, Martin’s central interest had become optics, for which he produced wooden and cardboard microscopes. In 1756 he began trading as an optician in London, also producing and selling scientific instruments and globes at his premises by ​‘The Hadleys Quadrant and Visual Glasses’.

An engraved likeness ​“from an Original Portrait” was found in the ​‘Gentleman’s Magazine’ of 1785, showing Martin in a wig, cravat, waistcoat and jacket (but no glasses!) in three-quarter perspective. It is the same portrait that appears in Wilkes’ encyclopedia, reengraved by Robert Page, with an additional illustration of his shop sign beneath the oval frame.