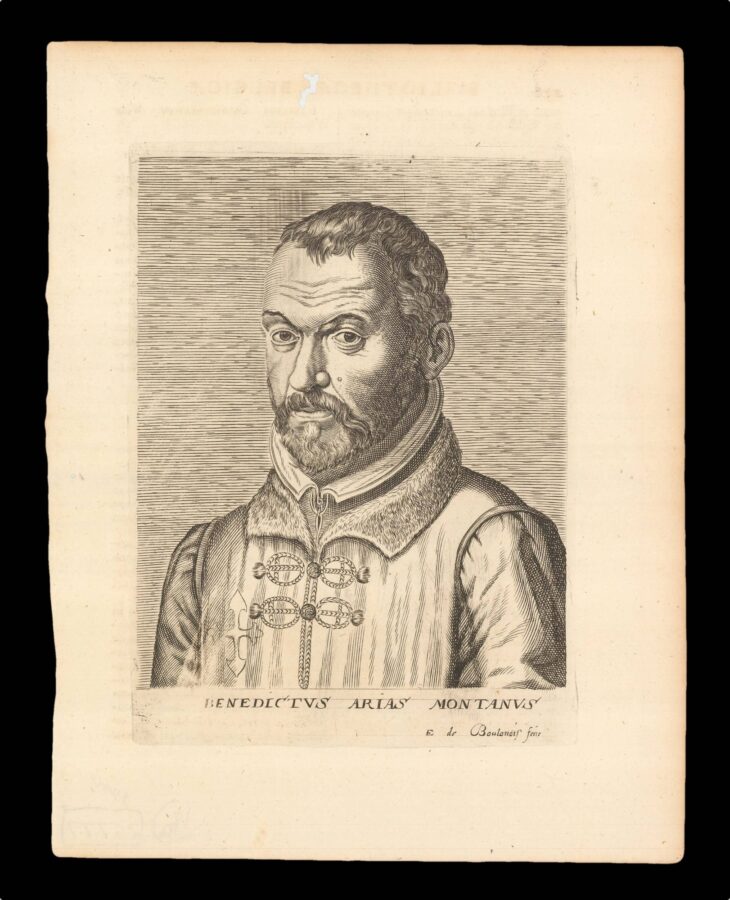 In 1569, ascetic priest and scholar Benito Arias Montano (1527–98) was commissioned by Philip II of Spain to edit a new edition of the Polyglot Bible, which would be published in 1572 by eminent humanist and publisher, Christophe Plantin. Following the publication of the ​‘Biblia sacra hebraice chaldaice, graece et latine’, Montano was denounced as a heretic by a fellow Spanish scholar, who claimed that he has shown disproportionate sympathy towards Judaism by inserting Aramaic paraphrases into the work. After several journeys to Rome, where he met with Pope Gregory XIII, Montano was acquitted of any wrongdoing and returned to Spain where he lived the rest of his life in worship, study, teaching and writing. His works contained a number of original maps relating to biblical studies, including the world, the Holy Land and Jerusalem.

In 1682, Montano’s portrait appeared in Isaac Bullard’s ​‘Academie des sciences et des arts, contenant les vies, & les eloges historiques des hommes illustres’, a collection of short biographies of notable men of learning, illustrated by their portraits. Showing the priest in three-quarter perspective wearing a fur-trimmed coat and collar, the image was engraved by Esme de Boulonois, like many of those in Bullard’s work. It appears to have been based on a portrait of Montano engraved the previous century by Philips Galle.