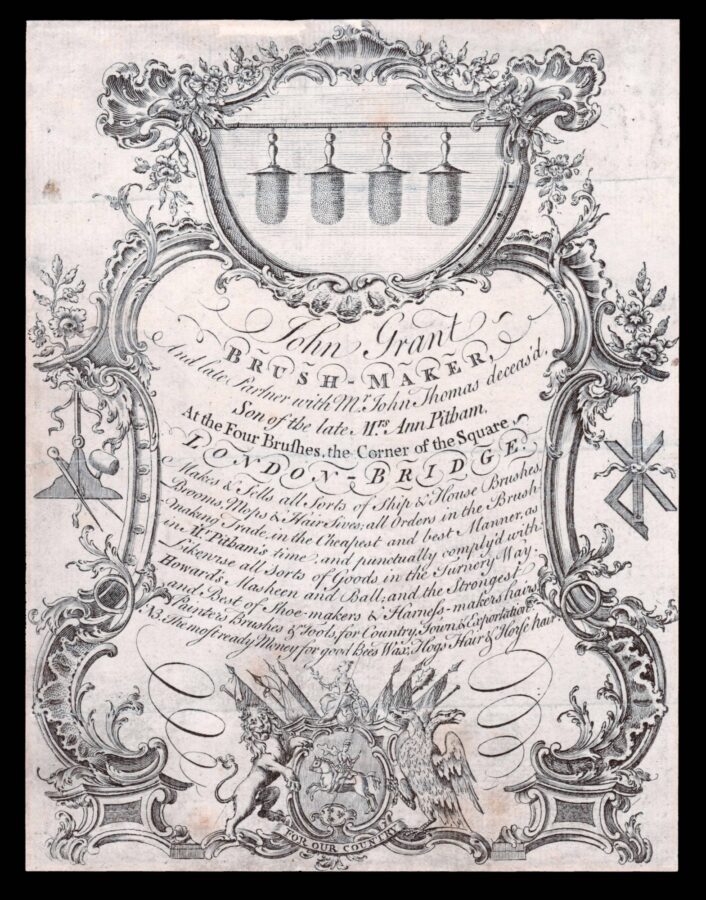 Brush Maker And late partner with Mr John Thomas deceas’d, Son of the late Mrs Ann Pitham… Makes and sells all sorts of Ship & House Brushes, Brooms, Mops & Hair Sives; all Orders in the Brush-making trade in the cheapest and best Manner, as in Mr. Pitham’s time, and punctually comply’d with. Likewise all sorts of Goods in the Turnery Way. Howard’s Masheen and Ball; and the Strongest and Best of Shoe-makers & Harness-makers hairs. Painters Brushes & Tools for Country, Town & Exportation. N.B. The most ready Money for good Bees Wax, Hogs Hair & Horse Hair.

John Grant was active at premises beside London Bridge from 1851 to 1859, after which point he moved to Leadenhall Street, keeping his recognisable sign of the Four Brushes. At his shop, Grant produced and sold various domestic items, specialising in brushes and brooms. Despite seeming rather mundane objects, an immense amount of time and skill went into creating brushes before the invention of industrial glue. Made by passing bunches of bristles though small holes and then binding them with wire, brushmaking was a consuming task in Grant’s day, with a single hairbrush taking around one day to ​“draw”.

Grant’s trade card is surmounted by an illustration of his shop sign, with the copious text beneath surrounded by an ornate framework made up of decorative motifs and the tools of the trade. The text establishes Grant’s authority in the realm of brushmaking by describing him as ​“late partner with Mr John Thomas deceas’d, Son of the late Mrs Ann Pitham” and assuring potential customers that Grant continues to operate ​“in the cheapest and best Manner, as in Mr. Pitham’s time”. Although little evidence of their businesses remains, it is clear that Ann Pitham and her son must have been well-establishes brushmakers themselves. Grant’s card also advertises the availability of ​“Bees Wax, Hogs Hair & Horse Hair” and ​“all sorts of Goods in the Turnery Way” at the Four Brushes.