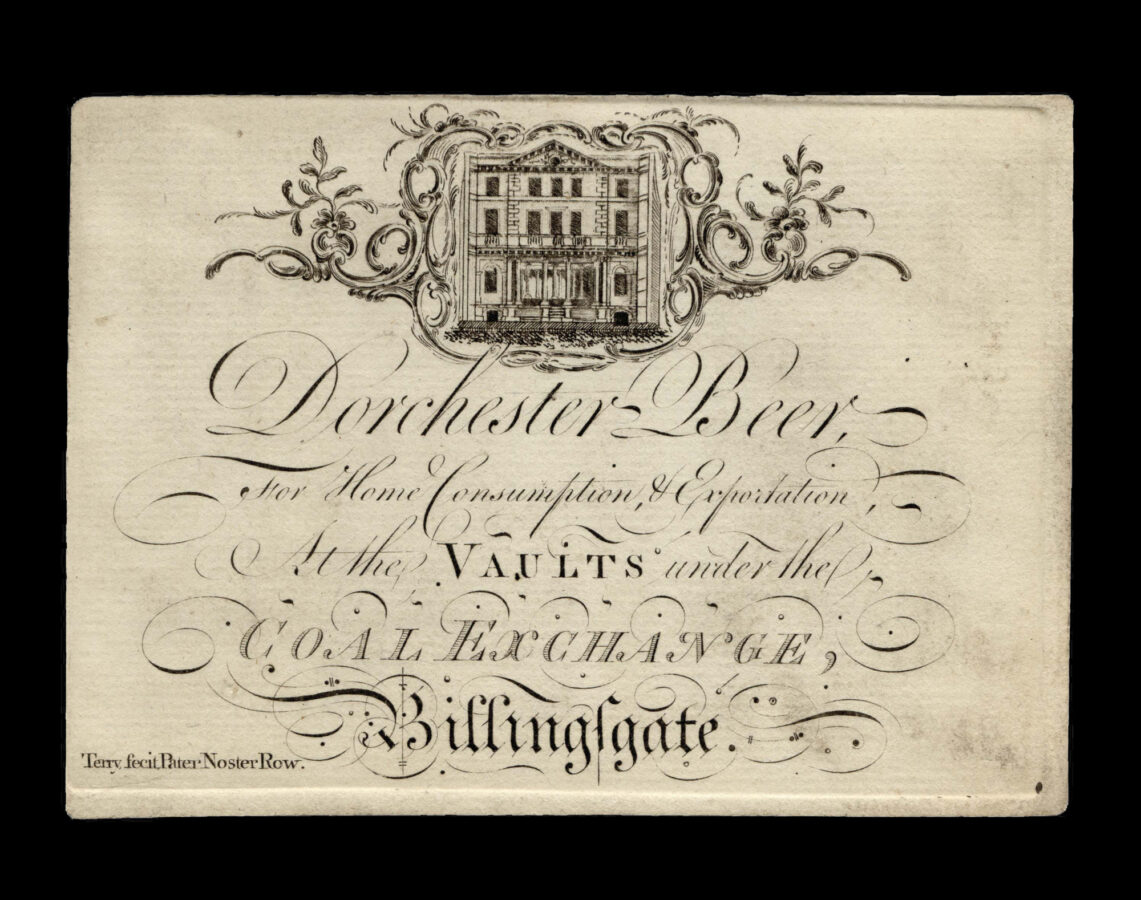 B is for Beer Merchant

A trade card advertising the availability of Dorchester beer at the Vaults under the Corn Exchange in Billingsgate, London.

Dorchester beer is described at length in ​‘The Complete English Brewer; or, the Whole art and mystery of brewing, etc’ written by George Watkins and published in 1773:

​“A peculiar fine kind of strong beer brewed in and about Dorchester has long been famous; and. has indeed deserved to be so. From being celebrated upon the spot, it has been sent into all parts of the kingdom; and is now one of the first beers in repute in England. There are some advantages on the place which tend to the excellence of this drink; and, from great practice, the brewers there, and thereabouts, having. a perfect knowledge of making it: but this kind of drink is not limited absolutely to the place. We shall teach the brewer how he may make it. any where; and. that in so exact a manner, that the palate of the Dorchester brewer himself should not find out the difference… Dorchester beer is a kind of strong malt-liquor. distinguished from all others by its briskness, softness, and pure taste. The ingredients of which it is made are the same with those of all other kinds of malt liquor; and therefore the peculiarity must be owing to the management.“

However, by the time of E.N. Hayman’s ​‘A Practical Treatise to Render the Art of Brewing More Easy’, published in 1823, the popularity of Dorchester beer seems to have died down: ​“This beer was formerly much esteemed, but since the introduction of Windsor and Burton ales, its sale has become very limited, in all probability from the circumstance of pale. malt being. employed therein instead of amber”. In ​‘A Treatise on the Art of Brewing’ (1820), Friedrich Accum suggested that ​“Dorchester Beer is usually nothing else than Bottled Porter”, Porter being a well-hopped, dark beer made with brown malt, which was developed early in the seventeenth century.

It is interesting that Accum specifies the bottled nature of Dorchester beer, especially at a time when bottled beer remained a luxury item for only the wealthy. High internal pressure required thick glass bottles, which were more expensive to manufacture, and as screw-top beer bottles were not invented until 1879, breweries also had to employ a multitude of workers to spend their days knocking in corks.

Although the present trade card does not mention bottles, it does advertise its beer as ​“for Home Consumption & Exportation”, home consumption surely being more convenient from a bottle than a cask. Above the information is an illustration of the Coal Exchange building in Billingsgate, from the vaults beneath which Dorchester beer was sold. It is interesting that neither the purveyor’s name nor the name of the business are given. Since Dorchester beer’s popularity seems to have peaked around the turn of the nineteenth century, it is likely that the present trade card is from that period.

Terry testified as an expert witness in several Old Bailey trials for forgery, stating that he is ​“the engraver employed by the Governor and Company of the Bank of England, I engrave the plates for the one and two pound notes”. ​“At his own expense he built a nonconformist meeting- place in Curtain Road, Shoreditch, where he preached for many years and to which he bequeathed over £6,000” (BM).
The Heal collection holds a number of trade cards for Terry. 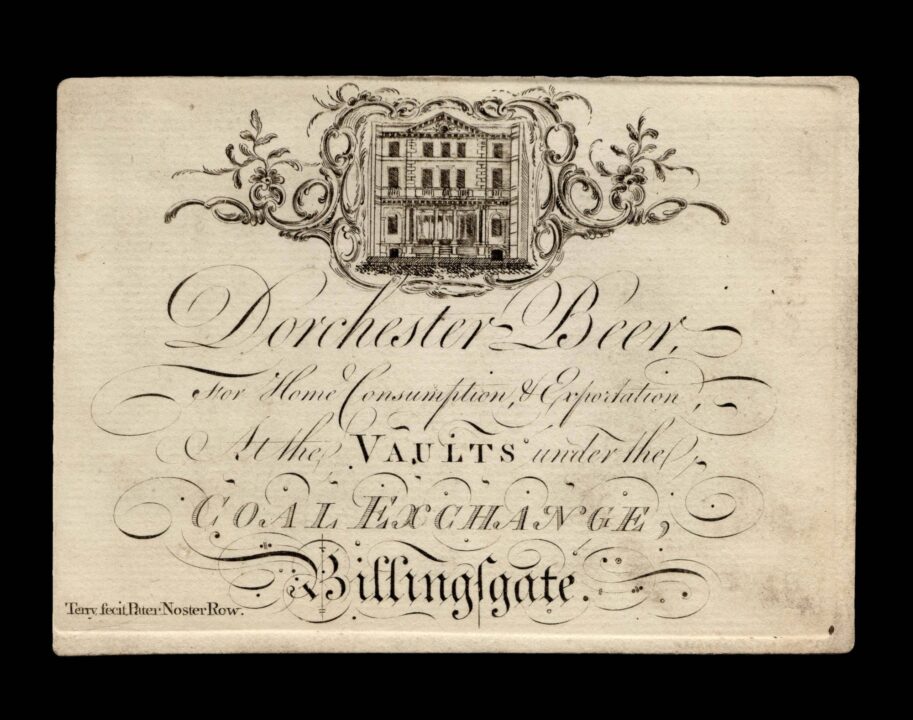