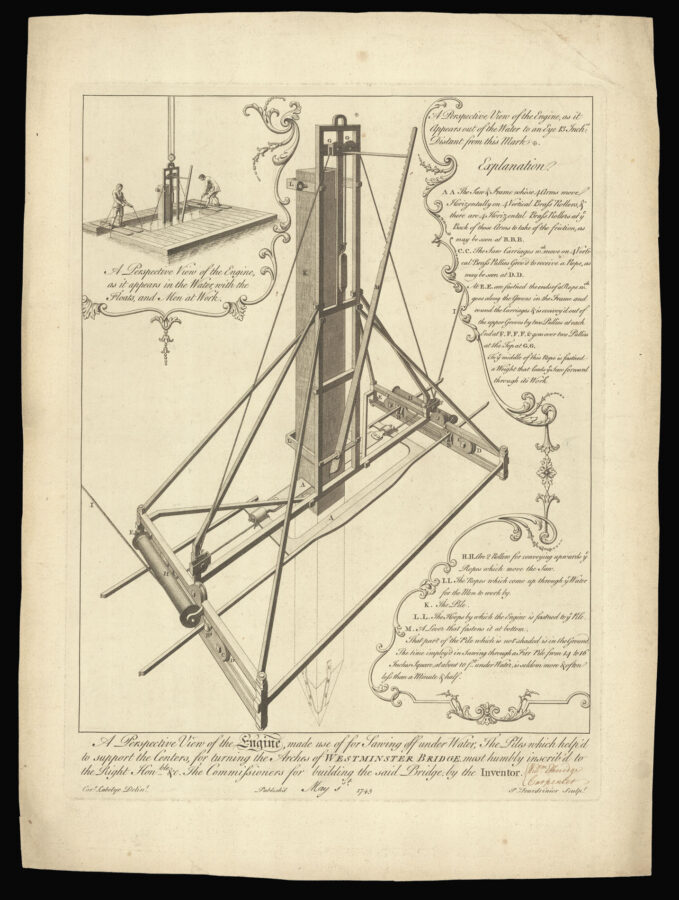 By FOURDRINIER, Paul after LABELYE, Charles, 1745

A Perspective View of the Engine, made use of for Sawing off under Water, The Piles which help’d to support the Centers, for turning the Arches of Westminster Bridge most humbly inscribed to the Right Honble. The Commissioners for building the said Bridge by the Inventor.

An intriguing print showing an underwater saw, signed by the inventor.

The inventor, William Etheridge (1709–1776) was a master carpenter. He worked with James King to build the first bridge at Westminster, and took over as foreman after King died. As well as the underwater saw, he also invented a battering ram to help strike the centres. He also worked on the Walton Bridge and designed Queens’ Bridge in Cambridge. His name and profession has been added by hand to the dedication.

The project the saw was invented for was Westminster Bridge, designed by Charles Labelye (1705–62), an engineer and architect. Labelye was given the project in 1738 and initially designed a timber superstructure augmented with stone. However, during the severe winter of 1739–40 the Thames froze and the existing timber was destroyed. Labelye regrouped and designed a Portland stone bridge instead. Paul Fourdrinier (1698–1758) was a Huguenot engraver who came to work in England, specialising in architectural subjects.

Not in the British Library; possibly an earlier state than the copy in the British Museum, which is undated, published by Carington Bowles and etched by John June.