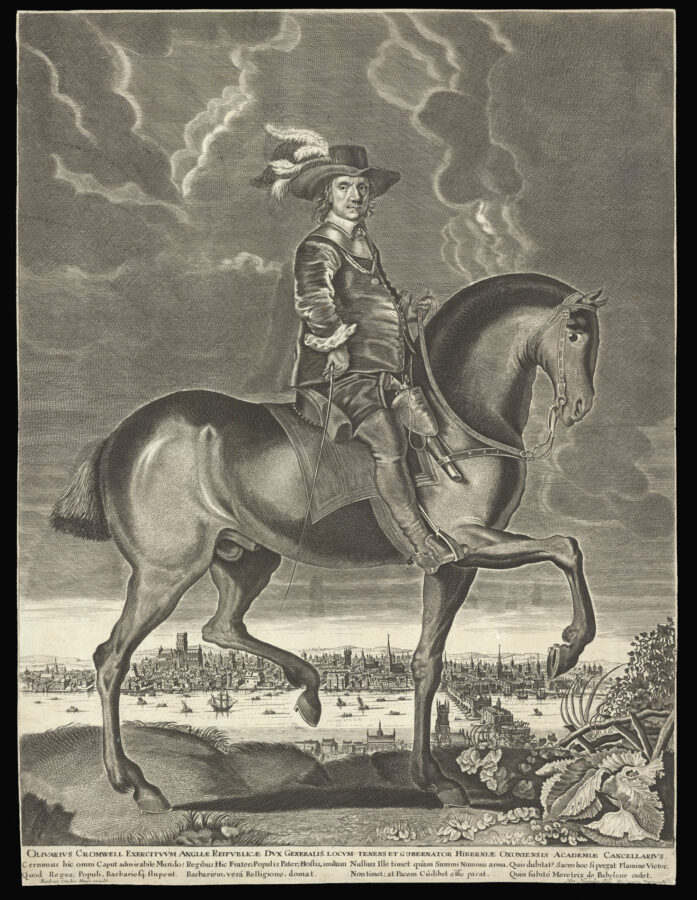 An equestrian portrait of Oliver Cromwell

An equestrian portrait of Oliver Cromwell, showing him against the backdrop of the River Thames and the London skyline, emphasising his importance and his control over the seat of power in the country. Charles I was executed in January 1649, and the Commonwealth was established. Cromwell’s titles are given at the bottom as leader of the armies of the English republic, interim governor of Ireland, and chancellor of the University of Oxford (a title which he lost in 1657, giving the latest possible date of the print). The Latin poem at the bottom of the print lauds Cromwell for his achievements, calling him ​“regibus hic frater; populis pater” — ​“brother to kings, parent to nations”. Cromwell was motivated by the ​“vera religione”, the ​“true religion” of Protestantism. This would have been well received in the Netherlands; the Protestant Dutch Republic had recently concluded the Eighty Years’ War against Catholic Spain in order to gain recognition as an independent country.

Rombout van den Hoeye (1622–71) was a Dutch publisher and printmaker, who often published political prints. He would later publish a satire showing Cromwell aping the station of a king.

O’Donoghue and Hake describe the print as a reworked version of Haelweg’s portrait of Christian IV of Denmark, but Layard disputes this.