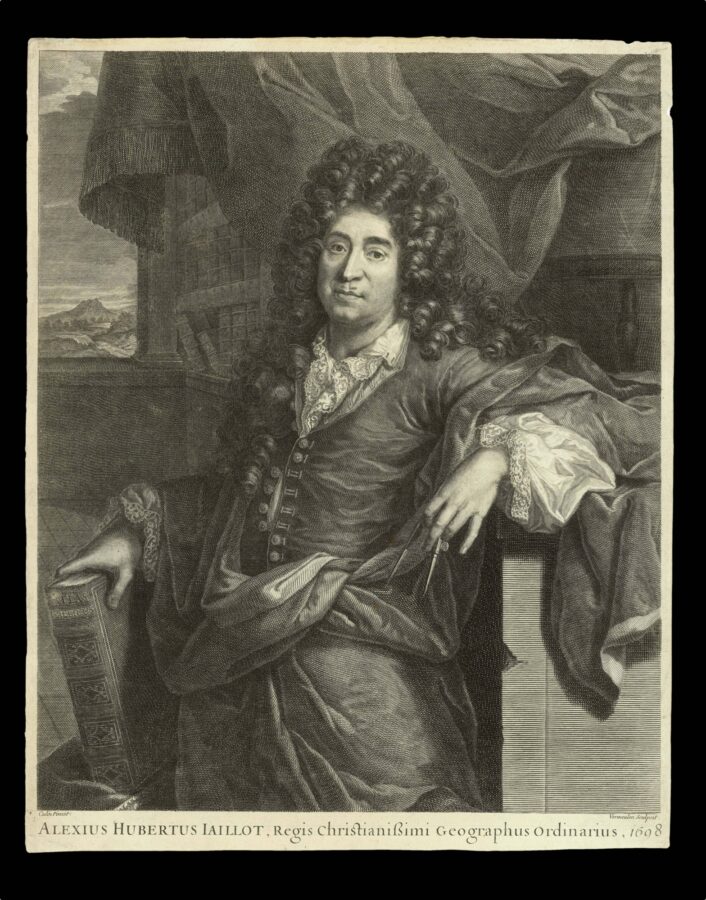 In 1657, Alexis-Hubert Jaillot (1632–1712) travelled to Paris with his brother in response to Louis XIV’s summons to the country’s artists and scientists to settle in the capital, hoping to make it the centre of European art and learning. Having initially made a living as a sculptor, Jaillot turned to cartography after marrying the daughter of mapmaker Nicholas Berey. At the beginning of the 1670s, he formed a partnership with the sons and heirs of Nicholas Sanson, who had been the most important French cartographer to date; Jaillot set about re-engraving and enlarging many of Sanson’s plates, a number of which had never been published.

From 1681 onwards, he compiled and published these in his ​‘Atlas Nouveau’ which proved hugely successful, running to numerous editions and translations through the remainder of the sixteenth and the seventeenth centuries. Jaillot’s work contributed to the development of European cartography as it moved away from the flamboyant Dutch school towards the more scientific approach of the French. That is not to say that his maps were not decorative, however, as in fact they were characterised by elaborate cartouches, ornamental scale-bars and extensive titles, always paired with detailed geographical information.

Jaillot had been painted by the French artist known only as Culin, at the end of the seventeenth century; Culin’s portrait was soon copied by printmaker Cornelis Vermeulen, who sold the engraving at his premises on the Reu des Noyers, Paris. The engraving shows Jaillot in half-length, dressed in ornately billowing garments and standing nonchalantly with one arm resting on pedestal. In his left hand he holds a pair of compasses, and in his right a large book; through the window behind him a natural landscape is visible. Beneath the image there is a Latin caption describing Jaillot as the ​“Official Geographer to our Most Christian King”, and providing a date of 1698.