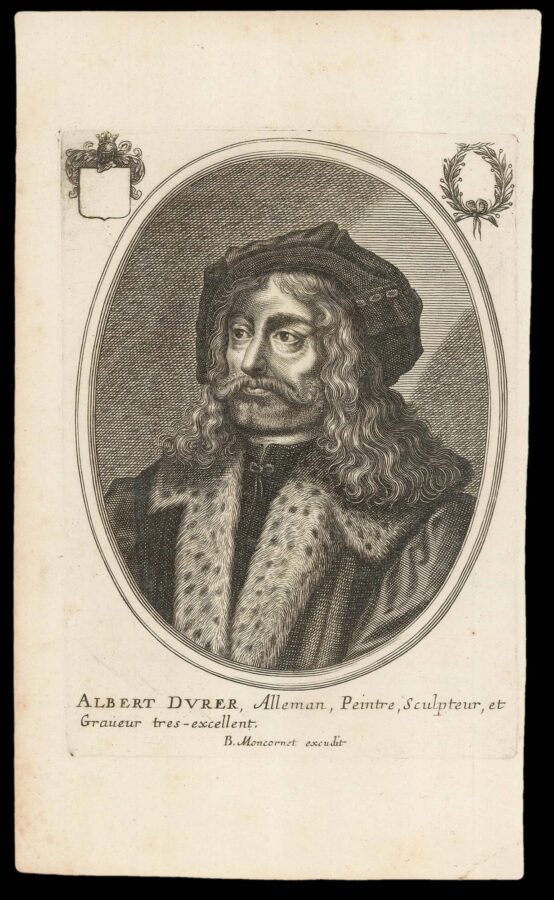 Albrecht Dürer (1471–1528) was born in Nuremberg, and started his career as a goldsmith apprenticed to his father. He then moved to the workshop of the painter Michael Wolgemut, who also made woodcuts. He was an apprentice at the workshop when they produced the woodcut maps for the​‘Liber chronicarum’, known as the Nuremberg Chronicle, in 1493: a world map and a map of Europe. Excelling in painting and engraving, Dürer became the court artist to the Holy Roman Emperors Maximilian I and Charles V.

Although perhaps best known today for his paintings and prints, Dürer’s interests were many and varied. He created the first printed European star charts, collaborating with Johannes Stabius and Conrad Heinfogel, and also collaborated with the former on a map of the known world in 1515, the first to show the earth as a sphere, and one of the first to use a stereographic projection to do so. It is inspired both by Ptolemaeus’​‘Geographia’, and also by the 1492​‘Erdapfel’ globe by Martin Behaim.

In addition to his famous self-portraits, Dürer’s visage is also recorded by a portrait engraved by French artist Balthasar Moncornet. Moncornet produced a great number of portraits showing eminent figures of the seventeenth century. It is not clear what image Moncornet used as basis for his portrait, or whether indeed he used one at all, as his Dürer looks rather different from the contemporary depictions of the artist, although he retains the characteristic long dark waved hair. Dürer is show wearing a fur-trimmed coat and cap. His image is. set within an oval frame, beneath which French text identifies him as ​“Albert Durer, German, most excellent painter, sculture and engraver”.