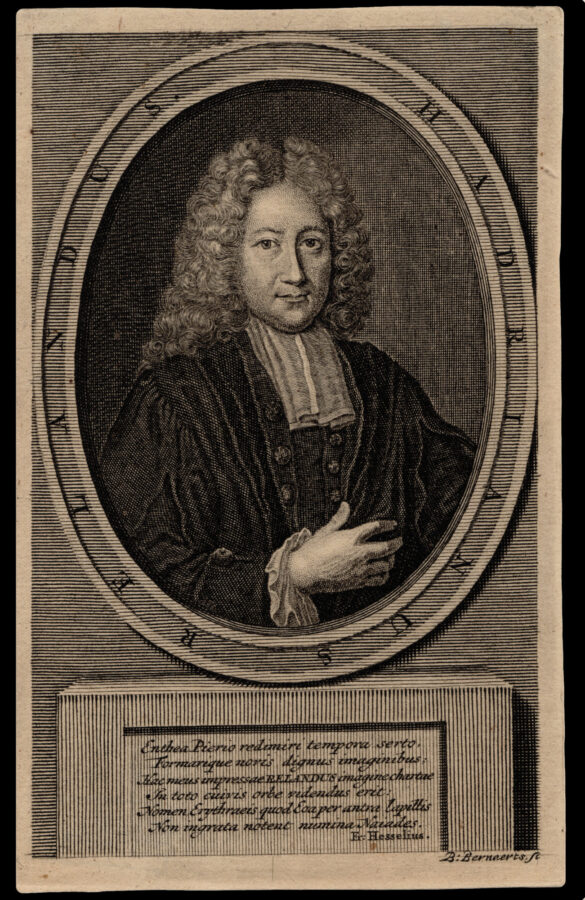 Despite never leaving his native Netherlands, seventeenth century scholar, cartographer and philologist Adrian Reland (1676 – 1718) had a great impact on the European understanding of Middle Eastern and Asian linguistics and cartography. Fluent not only in a number of modern European languages, Reland also knew Arabic, Hebrew and other Semitic dialects, and studied Persian to further his research into the connection between Eastern mythology and the Old Testament.

After years of compiling and studying Arabic texts, Reland published ​‘De religione Mohammedica libri duo’ in 1705, which came to be considered the first rigorous survey of Islamic beliefs and practices. It soon became a reference book across Europe, with translations in Dutch, English, German, French and Spanish; its popularity was matched by its criticism, however, and the book was placed on the Index Librorum Prohibitorum. Reland is also especially famous for his map of Japan, which is almost entirely based on Japanese sources, despite the fact that when it was published in 1715 Europeans were not even allowed to set foot in Japan.

This portrait was engraved by Balthasar Bernaerts, who was active in Amsterdam between 1720–1740, after an anonymous artist. It shows Reland in a tall powdered wig wearing his academic robes. The portrait is set in an oval frame atop a plinth, on which there is a Latin inscription: ​“Enthea Pierio redimiri tempora serto, / Formarique novis dignus imaginibus; / Hac meus impressae RELANDUS imagine chartae / In toto cuivis orbe videndus erit: / Nomen Erythraeis quod Eoa per antra lapillis / Non ingrata notent numina Naiades” (‘Let his graceful temples be crowned by the Pierian wreath, worthy to be formed into new images; Through this image with its written poem, my Reland, will be visible to anyone in the whole world: Let the charming Naiad nymphs know his name, throughout the eastern caves of Erythraean rock’).