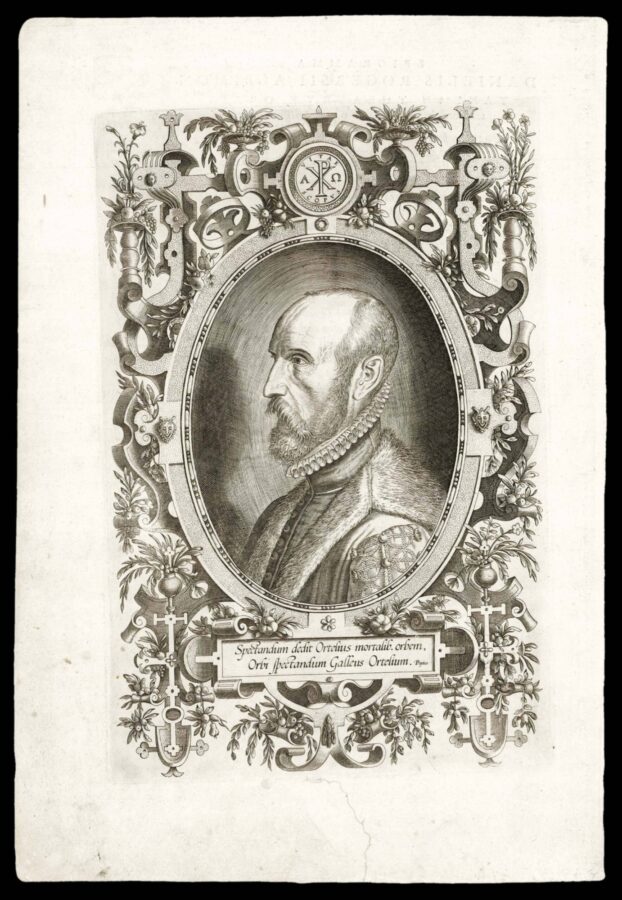 Galle’s iconic image of Ortelius, based on an original portrait by Adriaen Key, was included in every edition of Ortelius’s atlas of the world from 1579, the ​‘Theatrum orbis terrarum’. It is captioned in Latin, ​“Spectandum dedit Ortelius mortalib. orbem, Orbi Spectandum Galleus Ortelium” (‘Ortelius allowed mortals to see the world, Galle allows world to see Ortelius’). Indeed, the engraver of the portrait was Philips Galle, who published the first miniature version of Ortelius’s ​‘Theatrum…’ in 1577, under the title ​‘Epitome Theatri Orteliani’.

Adriaen Key’s (c1544-1589) is the only known portrait of Abraham Ortelius to have been painted during his lifetime. Like Ortelius, he was a native of Antwerp, and became one of the leading portraitists in that city. He became a master in Antwerp’s Guild of St. Luke (the painters’ guild) in 1568. Galle (1537–1612) moved from his home town of Haarlem to Antwerp in about 1570. A fiercely independent engraver and print publisher, Galle collaborated throughout his career with Christopher Plantin, publisher of Ortelius’s atlas.

Abraham Ortelius (1527–1598) took an active interest in cartography from an early age, beginning his career as an illuminator of maps in 1547, at the age of 20. This involved purchasing single maps from booksellers and colouring them for re-sale; Ortelius travelled extensively in his search for new material and was a well-known face at the Frankfurt bookfairs. Thus he built up an unrivalled network of contacts and connections, which included many of the leading historians, scientists, and cartographers of the day. These acquaintances proved invaluable in the compilation and completion of his ​‘Theatrum orbis Terrarum’.

First published in 1570, the work is generally considered the first atlas in the modern sense of the word, every map being uniform in size and style. With its comprehensive scope, the ​‘Theatrum’ was a huge step forward compared with the contemporary Lafreri atlases, compilations of various maps by different cartographers, bound up to order. Even though it was the most expensive work published at the time, it proved an instant success with four versions of the first edition printed in 1570 alone. The work would go on to be published for 42 years, with some 31 editions in several languages.