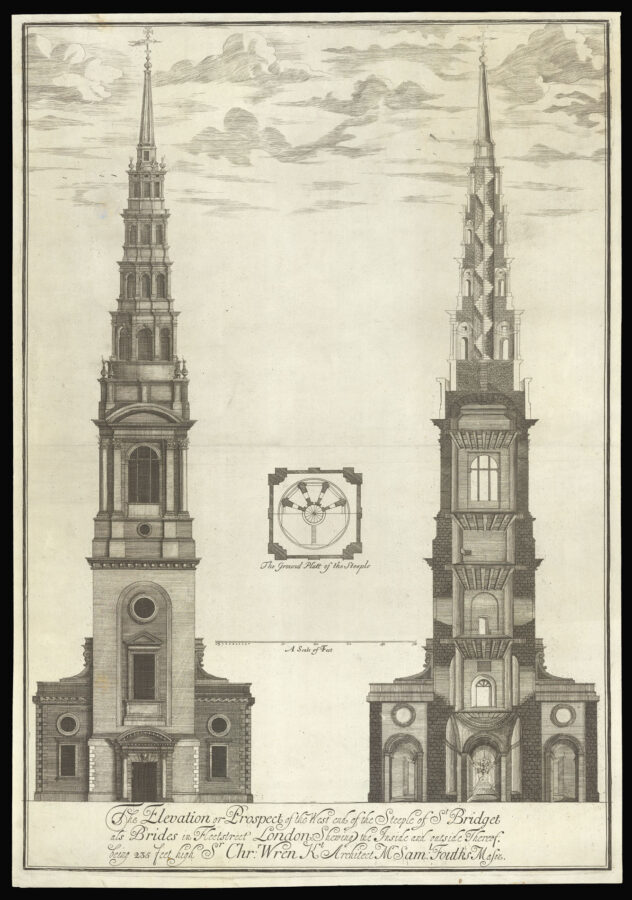 “A madrigal in stone”

The Elevation or Prospect of the West End of the Steeple of St Bridget at Brides in Fleetstreet London Shewing the Inside and outside Thereof, being 235 feet high Sir Chr. Wren Kt. Architect Mr. Saml. Foulks. Mason.

A print showing St Bride’s Church. St Bride’s has long been associated with the media, since the burgeoning print trade congregated around St Paul’s and along Fleet Street. The early printer Wynkyn de Worde lived and died there, and John Milton lived in the churchyard in his early life.

The church was rebuilt by Sir Christopher Wren in 1672 after the Fire of London, the latest incarnation of a place of worship that had stood on that site since the sixth century. The print shows a view from the outside on the left, and a cross-section on the right, with a ground plan of the steeple in between the two. The spire, the tallest of all Wren’s churches apart from St Paul’s, was not finished until 1703 and was deemed a success: the poet W.E. Henley called it ​“a madrigal in stone”. The steeple of St Bride’s is popularly supposed to have inspired the traditional wedding cake, after a baker saw the spire and recreated it for his fiancée.

Michael Burghers (?1647–1727) was a Dutch artist and engraver, who spent the majority of his career in London.