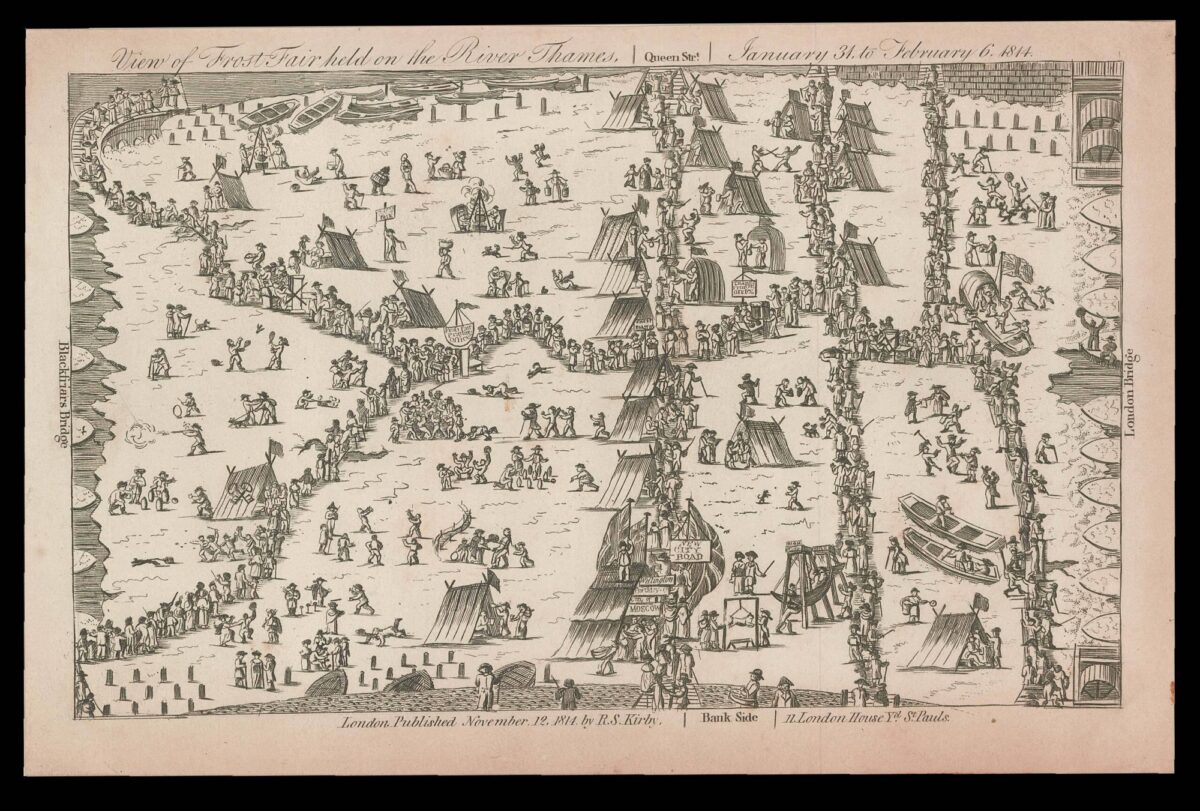 Published separately, but also issued in volume VI of R.S.’ Kirby’s Wonderful and Eccentric Museum; or, Magazine of Remarkable Characters, including all the curiosities of Nature & Art, from the Remotest Period to the Present Time, drawn from every authentic source’ (1820), where it accompanies Kirby’s chapter on the Frost Fair. His ​“correct Bird’s-eye View” illustrates the mayhem of the fair, extending from Blackfriars Bridge to London Bridge, with the entrance to Queen’s Street at the top and Bank Side at the bottom. The ​“New City Road” is runs through the middle of Kirby’s print. Two printing booths are fly banners: ​“Frost Fair Printing Office”, and the ​“Thames Printing Office”,… not far from where ​“Roasted Sheep” may be had. But most London citizens are eating, drinking, fighting and frolicking.

The winter of 1813–1814, was “…a specimen of what the Genius of Frost was capable of doing when he went about his work in earnest. It was in this eventful winter that Napoleon retreated from Moscow, amidst the horrors of cold, desolation, and famine; and it was in the winter of this year that Winter, ​‘canos hirsute capillos’, shook the icicles from his beard over the inhabitants of London, and took old Father Thames into custody… The frost set in with a cold, piercing easterly wind, on the 27th December, 1813, and lasted, with little intermission of its intensity, until the 5th of February following. So hard was the surface of the river for several weeks, and so thick the ice, that a long road, or rather street, which was called the City-road, was formed from Blackfriars’-bridge to old London-bridge,… On each side of this long street were booths of all descriptions; dancing, eating, drinking, smoking, &c. were going on without intermission all day and all night. There were printing presses, inter alia; and songs, poems, and descriptions setting forth the multitudes who thronged to see the wonders. Bambling-booths, shows, and so forth were in abundance; in short, the whole river represented an immense Saturnalia, an enormous Bartholomew fair. There were fires blazing, sausages frying, fiddlers tuning, horns blowing, and groups of dancers in incessant employment and requisition,…” (Illustrated London News, 1843).