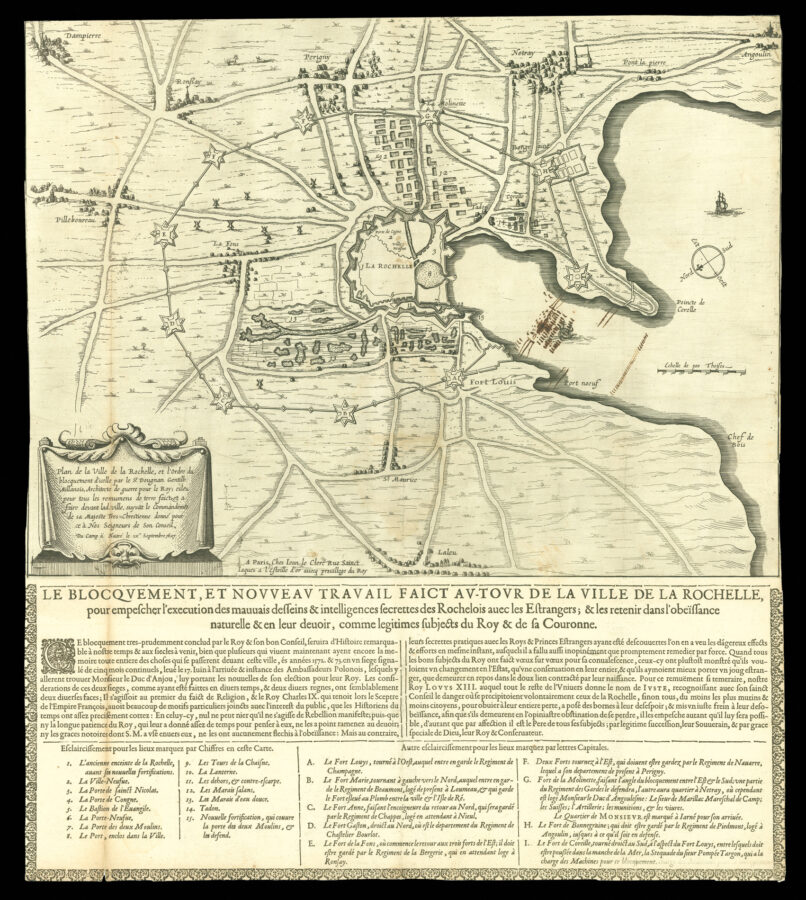 “You will see, gentlemen, that we shall be fools enough to take La Rochelle!”

A map of the early progress of the siege of La Rochelle, with the original siege lines marked around the city, but before the siege-works had really commenced. Contemporary manuscript insertions in the harbour reflects attempts to blockade the city, engraved on the later maps of the siege. The letterpress text below is part informative, part propaganda, emphasising the alliance of the citizens of La Rochelle with ​“foreigners” for ill-purpose, and the need to compel the citizens to fulfil their obligations as subjects of the French (Catholic) crown.

The Siege of La Rochelle began in September 1627. The city had been granted to the Huguenots in France in the Edict of Nantes, and became a Protestant stronghold. It was a focal point in the French Wars of Religion and in the Anglo-French War, and royal troops had surrounded it for a month before the city garrison finally fired on them, and the siege began in earnest. The siege, and the role of Cardinal Richelieu as a commander of the royal forces there, was memorably described by Alexandre Dumas in ​‘The Three Musketeers’. Francois de Bassompierre, a French courtier leading the first wave of the attack, declares ​“You will see, gentlemen, that we shall be fools enough to take La Rochelle!”.

The Ashmolean Museum (Oxford) has a more general manuscript map of the siege drawn by Dougnan.