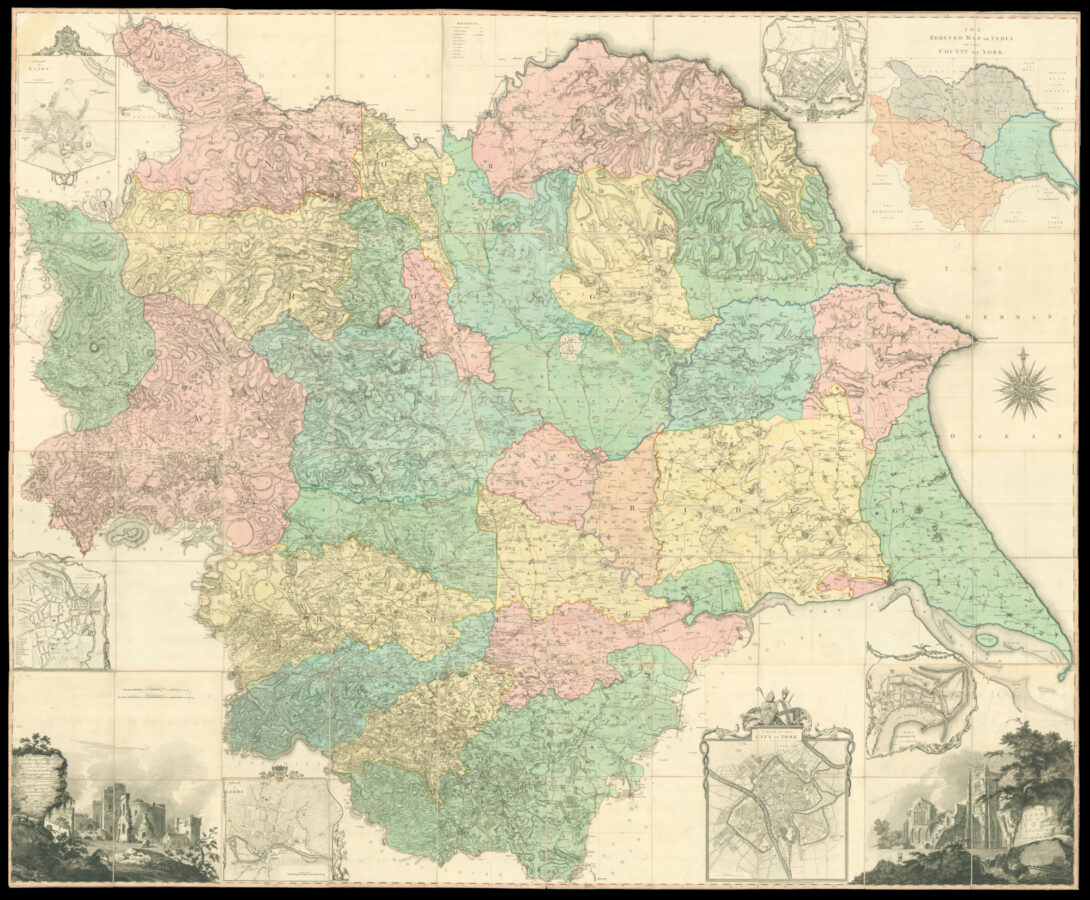 Yorkshire — Jefferys’ monumental map of the county of Yorkshire

Thomas Jefferys was one of the most important and prolific map publishers of the eighteenth century and was appointed Cartographer to the Prince of Wales in 1748, and later to George III. Apart from his publishing business he produced many important atlases and maps of America and the West Indies and surveyed and engraved many large-scale maps of English counties including Bedfordshire, Buckinghamshire, Oxfordshire, Westmoreland and Yorkshire. The huge cost involved in these projects was a major contribution to his slide into insolvency and he became bankrupt in 1766. Surprisingly it made little difference to his business activities, ​“having found some friends who have been compassionate enough to re-instate me in my shop”. One of these friends was Robert Sayer who joined him in partnership and whose imprint appeared on the later editions of some of Jefferys’ large-scale surveys.

Thomas Jefferys was involved in one capacity or another in no less than ten English large-scale surveys in the latter part of the eighteenth century but died a year before the publication of the magnificent survey of Yorkshire. Although he achieved early prominence through his engraving of the award winning map of Devon by Benjamin Donn in 1765 his greatest achievement in this field was undoubtedly this map of Yorkshire engraved on a scale of 1 inch to 1 mile and complemented by fine plans of Sheffield, Leeds, Ripon, Kingston-upon-Hull and Scarborough, mostly drawn on a scale of 132 yards to the inch. Two of the sheets are each devoted to a topographical view engraved by W. Walker after N. T. Dall. The view of Fountain Abbey contains the title to the map whilst that of Middleham Castle embraces a long dedication to Charles Wentworth, who claimed ​“Lord Lieutenant of the West Riding” amongst his many titles. Another sheet is devoted to a very simple ​“Reduced Map of the County” ruled off as an index to the larger one. Drawn on so large a scale the detail is obviously considerable and each sheet carries a running title outside the map border giving a summary of its geographical limits. Although the list of ​“References” is unusually brief, listing only ​“Churches or Chapels, Gentlemen’s Seats, Turnpike Roads, Open and Enclosed Roads, Water Mills, Lea and Iron Mines, Coal Pits and Allum Works”, the map contains all the other features normally found on a large-scale survey, including towns, villages and parishes, farms and cottages, and parks, rivers and bridges, as well as an accurate indication of the coastline to the North Sea. The hills and moors are clearly delineated and the topographical detail is immense. Apart from the divisions into ridings, each individual wapontake is outline and wash-coloured for easy identification.

With its pristine condition and full wash colour, a most desirable example of this important survey, Jefferys major contribution to English large-scale map-making.