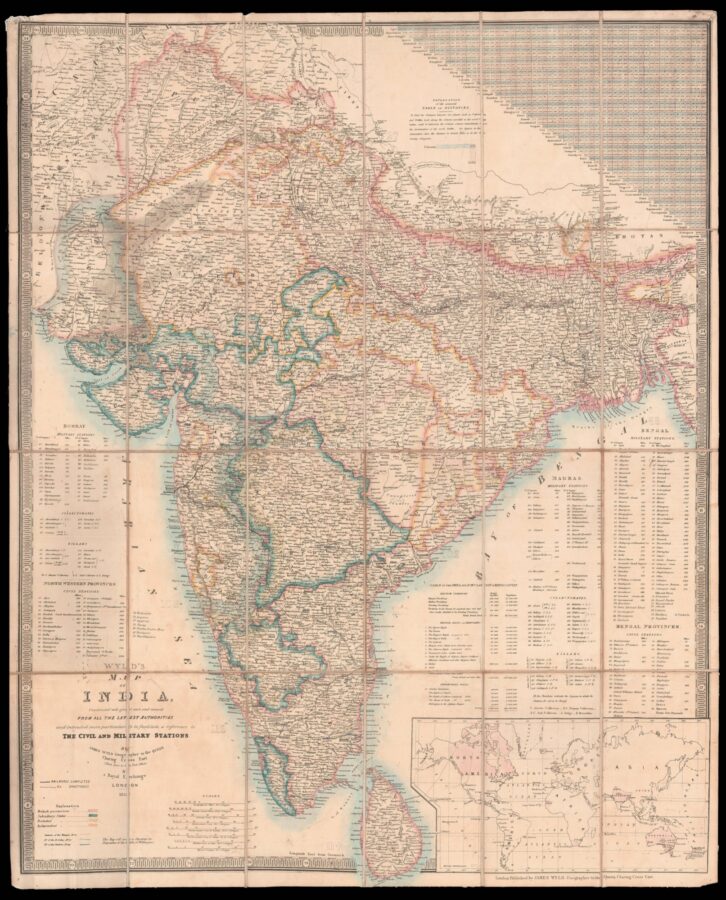 Wyld’s New Map of India. Constructed with great care and research from all the Latest Authorities and intended more particularly to facilitate a reference to the Civil and Military Stations.

A comprehensive and decorative road, railway and telegraphic map of the peninsula, including details of postal roads used by the British in India. This publication by Wyld, is after an earlier map by the cartographer from the 1830s, produced for the East India Company. A colour key in the lower left corner of the map indicates the division of the provinces and gives details of the locations of military stations as well as railroads which are completed and those which are ​“Do Sanctioned”. There is a chart in the upper right corner of the map which gives distances between major cities and towns. Whilst dated 1857, the rebellion is not the focus of the map, however a note under the title reads, ​“This Map will serve to illustrate the despatches of the Duke of Wellington”. The First Duke Arthur Wellesley had died in 1852 and a collation of his dispatches from various campaigns, including India (1797–1805) which were published and republished between 1834 and 1844.
James Wyld (the younger) served as Geographer to Queen Victoria and Prince Albert (as his father had been before him) upon his election as a fellow to the Royal Geographical Society in 1839. He is considered to be one of the most prolific publisher and salesman of maps and guides of his day.