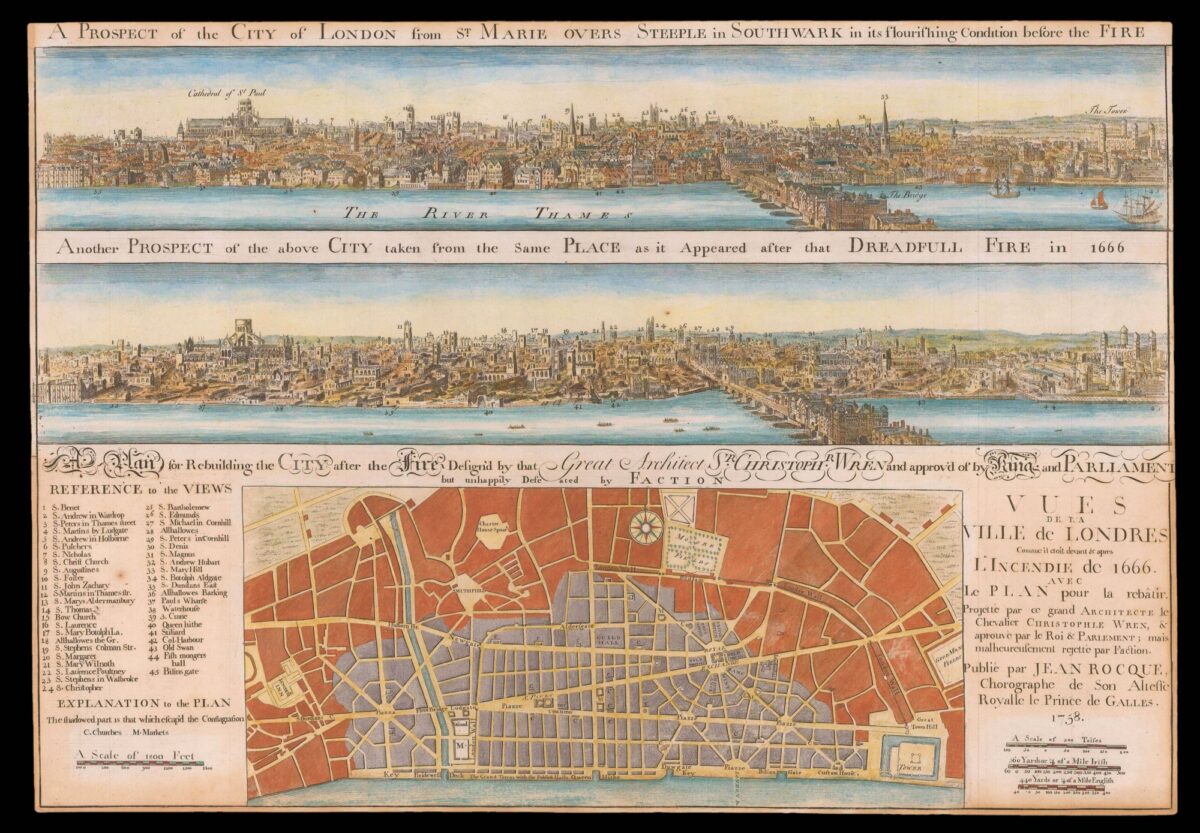 Christopher Wren presented his plan for the city of London to King Charles II on the 10th September, just four days after the fire had been tamed.

Wren schooled in the Vitruvian ideas of classical architecture and inspired by the urban planning he saw in Rome and Paris, sought to radically alter the heart of city with grand boulevards and piazzas. Unfortunately, Wren’s grand ideas would come up against the economic realities of a war with the Dutch, and the need to get the city up and running and back to work as quickly as possible. However, the principal stumbling block was that Wren’s plan followed none of the existing streets, and its implementation would have involved redefining every single property title, an impossible cadastral undertaking.

Although his plan was doomed from the start, and was roundly rejected by Parliament, who favoured expediency over idealism, the plan had some prominent backers in the architectural community, such as John Hawksmoor and Wren’s son Christopher. Christopher had his father’s plan republished in 1710 and again in 1724, and would take every opportunity to remind the public of the beauty and grandiosity of his father’s unrealised vision.

Through his advocacy a myth grew up that Wren’s plan had in fact been sanctioned by both King and Parliament, but defeated by the short term commercial and property interest of the City burghers. This legend was enhanced when the architect John Gwynn, who had acquired Wren’s original drawings from the family, republished Wren’s plan in 1749, stating in the title that the plan had been defeated by ​‘factions’.

Here Rocque, who had published his own plan of the city in 1746, repeats the lie in the title, with Wren’s plan stippled and coloured blue below. Above the plan are copies of Wenceslaus Hollar’s panorama’s of pre and post fire London, which were first engraved shortly after the fire.

Like so many lies, Wren’s would have remarkable longevity, with it being cited by his biographer James Elmes in the nineteenth century. The great public health reformer Sir Edwin Chadwick, stated that had Wren’s plan been enacted that London would have suffered a third few deaths from unsanitary conditions.

In the twentieth Wren’s plan was held up, by town planners as one of a great opportunity missed, and would be used again to try and persuade the Corporation of London to radically change the cityscape following the devastation wrought by the Second World War.

The map is rare. OCLC records only two institutional examples: The British Library; and Yale Centre for British Art; no examples have appeared in commerce since WWII. 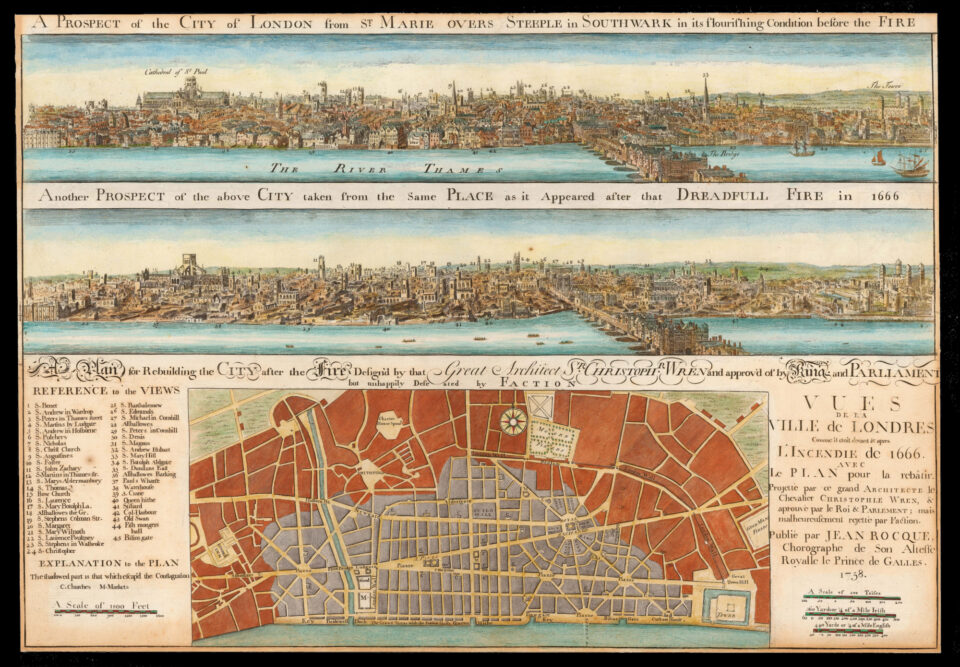 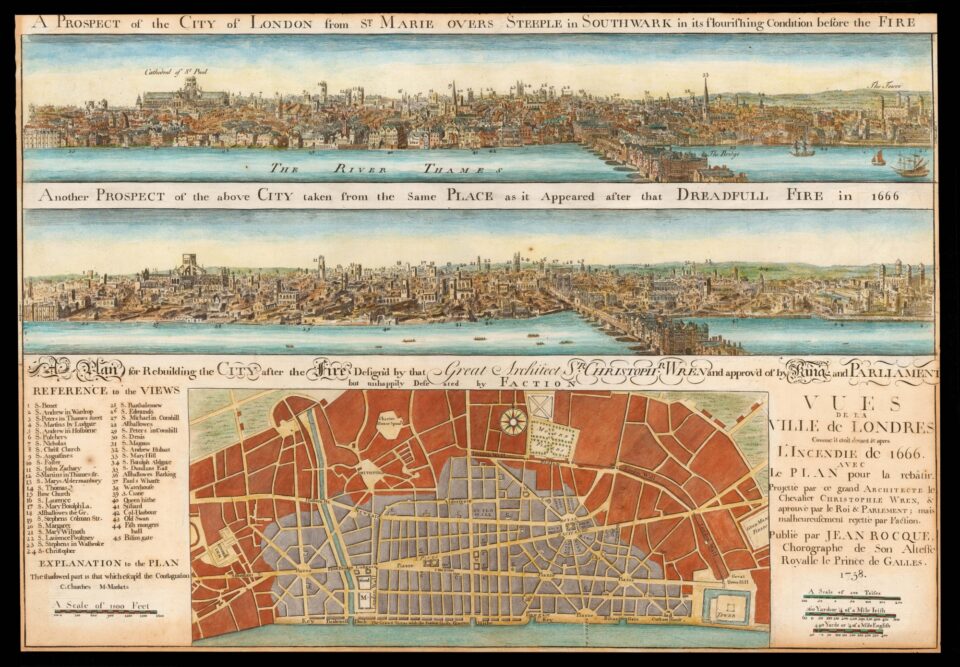 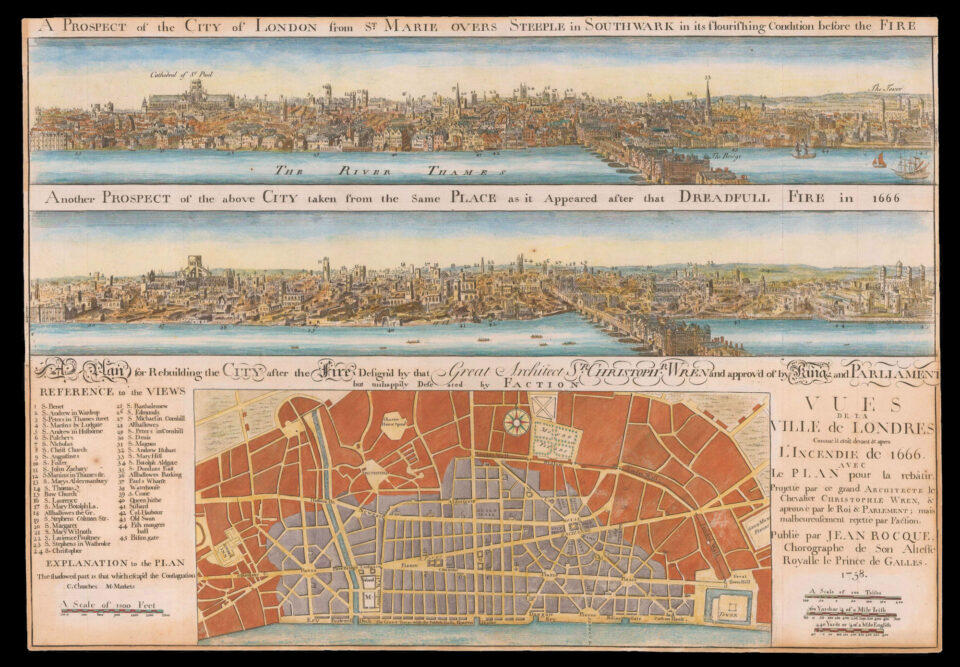