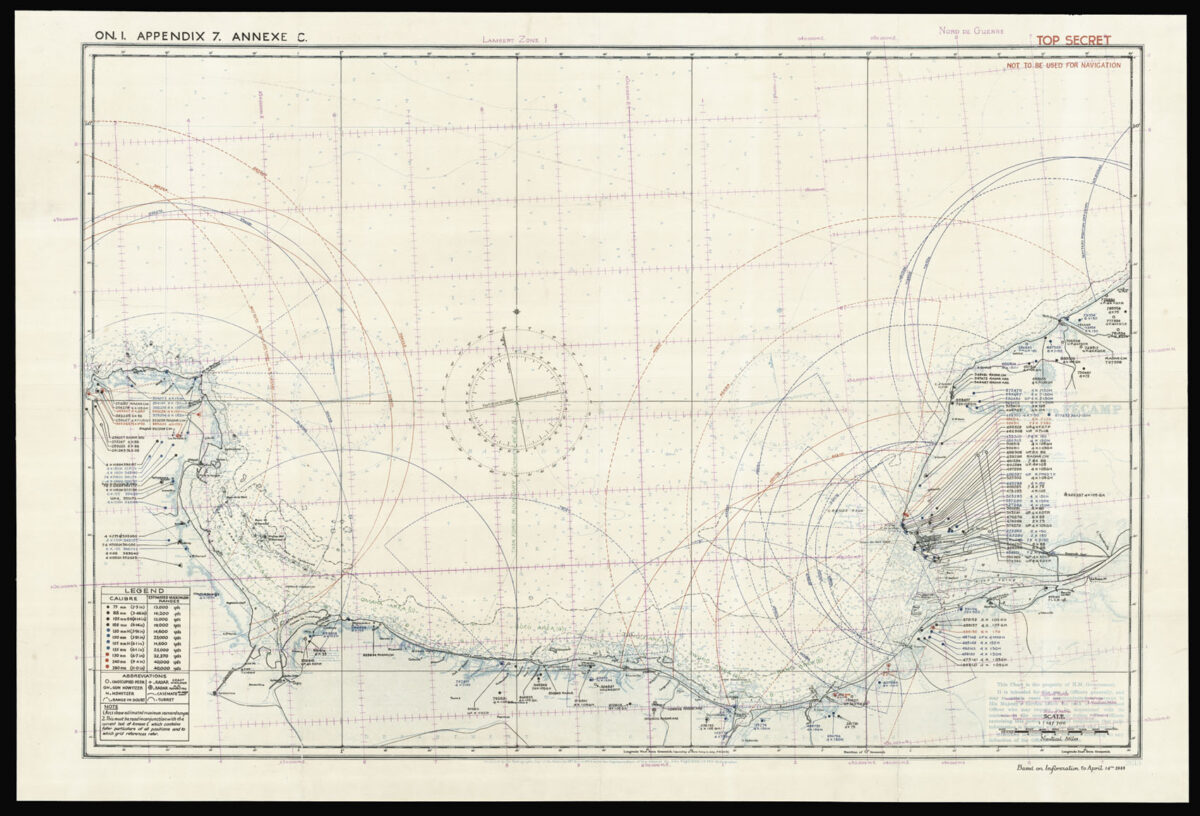 The map, produced as part of the strategic planning for Operation Overlord and the D‑Day landings of 6 June 1944, provides an overview of the Normandy coast from the Cotentin Peninsula to the region east of Le Havre. The map of ​“Cape Levi to Fecamp” is based on observations between 1836 and 1924 by French government charts and is sheet XI in the series. The present chart was printed on March 15th 1944 and includes a notation in the bottom right corner stating that the map is ​“Based on Information to April 14th 1944” as up to date information was vital to the operation.

The Theatre Intelligence Section of the Director of Naval Intelligence had a series of these French navigational charts printed in light blue and overprinted in black to indicate enemy gun positions, details of calibre, and ranges. These charts were part of the top secret materials related to the Neptune phase of Operation Overlord entitled ​“Top Secret. ON.1. Appendix VII. Annexe C. Text and Diagrams of Neptune Batteries”. The archive includes an 88-page booklet issued by Rear-Admiral Alan G. Kirk, folios of shoreline sketches, charts, and maps.

Operation ​“Overlord” was part of a large strategic plan designed to bring about the defeat of Germany by heavy assaults on German-occupied Europe from the United Kingdom, the Mediterranean and Russia. The outline of the Operation ​‘Overlord’ plan was completed in July 1943, and the particular assault on the Normandy beaches from the UK and the English Channel elaborated under the title of Operation ​“Neptune” in February 1944. ​“Neptune” involved preparatory aerial and naval bombing of German coastal positions, before the historic landings of D‑Day itself: the largest amphibious operation in history, and a pivotal moment in the course of the Second World War which eventually resulted in the liberation of western Europe from German occupation.

The chart shows each of the beaches that were taken by Allied troops during the Operation Overlord landings on June 6, 1944 – Utah, Omaha, Gold, Juno and Sword. It also includes a sixth beach code-named ​“Band”. The plan was to bombard this beach if the German gun battery at Merville could not be taken.

In addition to the clearly labelled beaches, the map identifies every known German artillery position defending the beaches, with each given a colour-coded dot according to type and calibre. Around these dots a series of coloured rings indicate the position’s maximum range and degree of rotation, which would have informed the ships of the best approaches and routes to avoid.

A legend at bottom left provides a list the calibre and ranges of the German guns and a key to the various types of emplacements and radar installations. The chart also notes that there is accompanying text in Annexe C, part of the greater Neptune monograph.

The National Maritime Museum has a bound folder of the Neptune monograph (CAZ/29).

From the archive of Rear Admiral George B.H. Stallings.