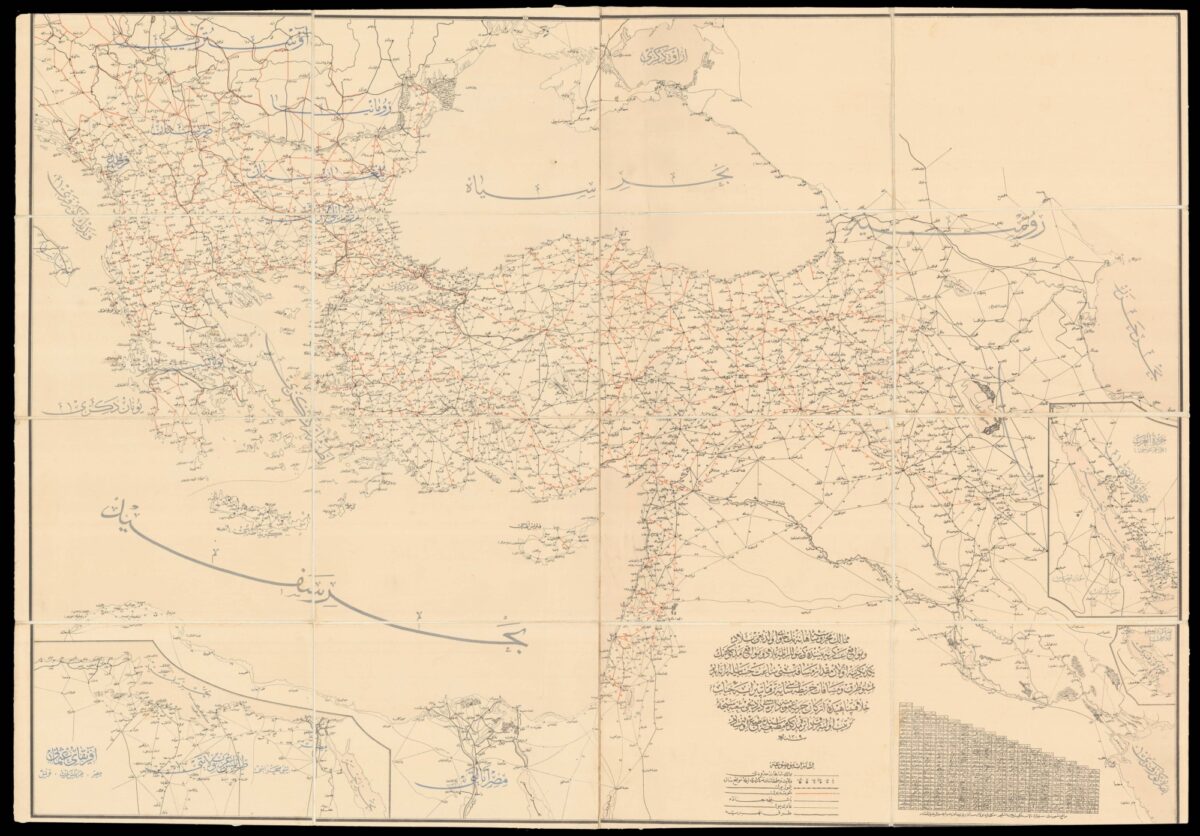 With an inset map showing Mecca

A rare map in Ottoman Turkish showing contemporary modern road and train connections in the Ottoman Empire, stretching to North Africa in the west and the Red Sea with Mecca and Medina in the south, and Kuwait in the south-east.

The thin black lines mark dirt paths, thicker black ones show routes appropriate for carts, and red lines mark the newest achievement, the new macadam roads and roads in construction. Importantly, the map delineates some of the world’s most strategically important railway lines. The Haimidian era marked intense railway construction in both the European and Asiatic parts of the Ottoman Empire, with profound ramifications to both the national economy and geopolitics.

In South-eastern Europe, the map depicts the first Trans-Balkan rail route, built at the initiative of the Chemins de fer Orientaux, that connected Istanbul with Vienna, and beyond to the general European railway system. Against much political and technical difficulties, this line was completed in 1888, and beginning the following year hosted the Orient Express; running from Paris to Istanbul, it is history’s most famous ultra-luxe rail service, immortalized in countless books and movies, including, most notably Agatha Christie’s thriller. The eastern terminus of the line was the elegant Sirkeci Station, on the shores of the Golden Horn, completed in 1890. As shown here, the main route of the connection ran from Vienna, then to Budapest, Belgrade, Niš, Sofia, Plovdiv, Edirne and then Istanbul.

Crossing the Bosporus, the map depicts the routes of Anatolian Railway, an epic project that opened the heart of Turkey to the industrial revolution and modern travel. The construction of the railway commenced in 1871, under the guidance of the brilliant German engineer Wilhelm Pressel, at its western origin, Haydarpaşa, Üsküdar (Istanbul). It was progressively extended eastward to Ismit, by August 1873. Due to the Empire’s extreme political and economic problems, further construction was paused until 1880, when the line was extended to Adapazarı. It was intended for the railway to continue to Ankara and Konya, but the immense costs and technical difficulties of building the line over the rocky elevations of the Anatolian interior for some years frustrated the efforts of various syndicates.

Finally, in October 1888, a consortium headed by Deutsche Bank assumed control of the railway and all future construction. Importantly, this arrangement represented the first bold German bid to gain political and economic power within the Ottoman Empire, as in winning control of the line, Deutsche Bank had aggressively muscled out the Franco-British interests that had held sway at the Sublime Porte for some decades. Indeed, in 1889, Deutsche Bank took over the Chemins de fer Orientaux, and in the coming years Germany continued to expand its role in railways across the Ottoman Empire. German control of the railways formed the basis of the German-Ottoman Alliance (and the gradual side-lining of France and Britain) that was to eventually take both nations united into World War I.

Returng to the construction of the Anatolian Railway, the German engineering firm Philipp Holzmann made remarkable progress cutting the line into the interior, completing the link to Ankara by the end of 1892. The following year, the southern branch was commenced, departing the Ismit-Ankara line at Eskişehir, working down to Konya. Progress on this route was likewise impressive, as the line was opened to Afyon by August 1895. The present map shows the southern route in the latter stages of it progress, nearly reaching Konya, which was achieved in July 1896.