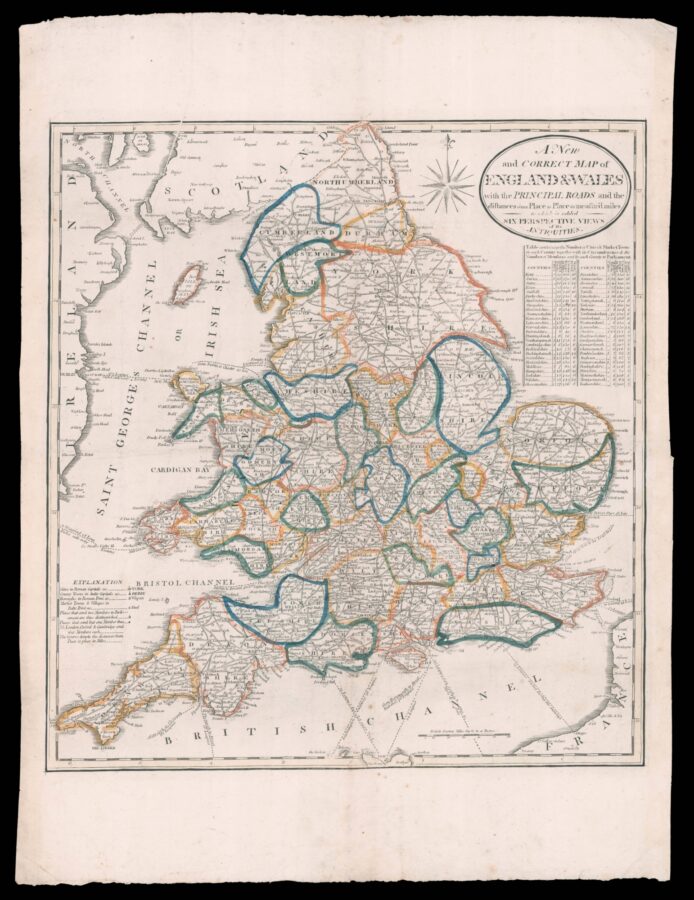 A New and Correct Map of England & Wales with the Principal Roads and the distances from Place to Place in measur’d miles to which is added Six Persective Views of its Antiquity.

The map marks cities (capital letters), county towns (capitals in italics), borough towns (title case), market towns and villages (italics), places that send two Members of Parliament (a line atop a circle), and places that send one MP (a dot); a note below states that London, Oxford, and Cambridge each send four MPs. Roads are drawn between prominent cities, towns and villages, together with their distances from each other in miles. Below the title is a table enumerating each county’s cities and market towns, the county’s circumference, and the number of MPs.

William West received training from the engraver and publisher James Evans in the 1780s. He would later take over the running of John Evans’ (James’ brother) business in partnership with John’s son James. West for the rest of his career was know as a publisher of children’s educational material, and only known to have published two maps, the present map of England and Wales, and a two sheet map of the world. Both of which are exceedingly rare.

We are unable to trace an other example of this state of the map. The British Library houses the only other extant example dated 1st March 1804 and with the name of William West. The present map bears on imprint.