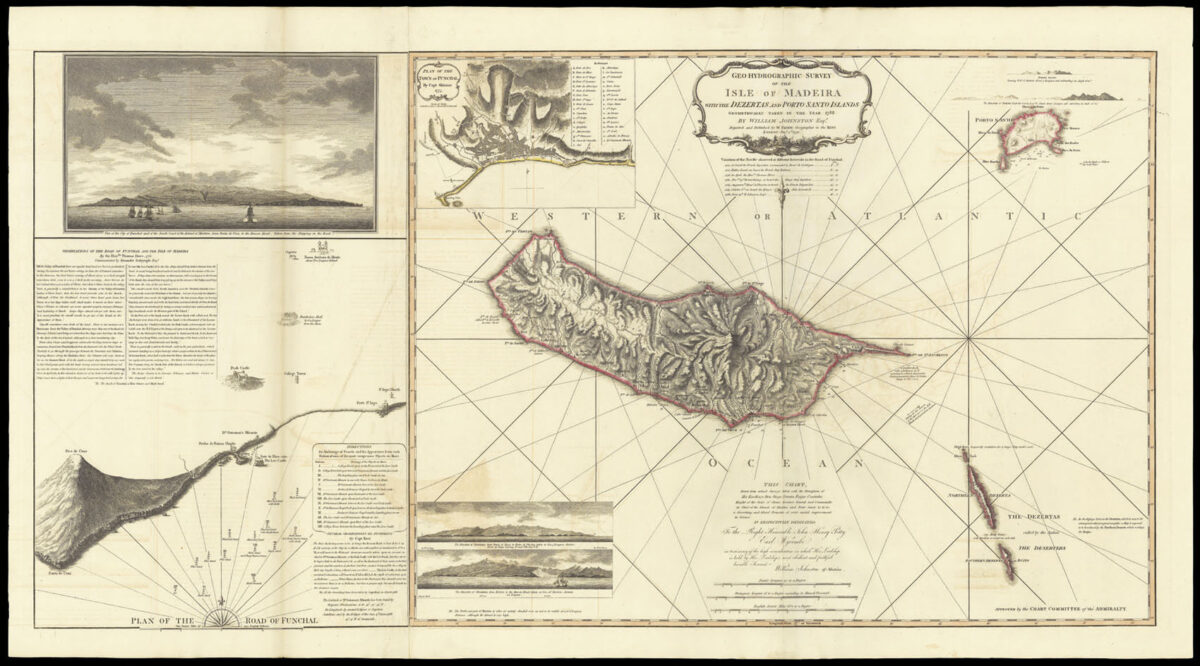 Geo-Hydrographic Survey of the Isle of Madeira with the Dezertas and Porto Santo Islands geometrically taken in the year 1788. By William Johnston Esq[ui]r[e]. This Chart drawn from actual Surveys taken with the Permission of His Excellency Don Diego Perreira Forjas Coutinho, Knight of the Order of Christ, Governor General and Commander in Chief of the Island of Madeira and Porto Santo &c. &c. &c. a discerning and liberal Promoter of every useful improvement in Science. Is respectfully dedicated To the Right Honourable John Henry Petty Earl Wycombe in testimony of the high consideration in which His Lordship is held by His Lordship’s most humble and faithful humble Servant William Johnston of Madeira.

The British had particularly strong links with Madeira. The island had been under Portuguese rule since its discovery in 1418 — Portugal being the country with which England had (and still has) its oldest diplomatic alliance — based on the Treaty of Windsor of 1386. This alliance was further strengthened when, in 1662, Charles II married Catherine of Braganza. As a result Englishmen were allowed to settle on the island. Many of the new arrivals would later become involved in the lucrative Madeira port trade. It is likely that William Johnston, the author of the present chart, was involved in the industry, as one William Johnston is recorded as a partner in Newton, Gordon, and Johnston from 1777–1791. The company — now trading as Cossart, Gordon & Co. — was established by Francis Newton in 1745 and is the oldest company in the Madeira wine trade. These strong links were coupled with the island’s strategic significance as a principal port of call for the burgeoning transatlantic trade.

Attached to the left of the chart is a ​‘Plan of the Road of Funchal’, with detailed soundings, anchorages, and observations made by Thomas Howe in 1762; whose observations were communicated by Alexander Dalrymple to the admiralty.

We are aware of only one other recorded example of the charts together joined; that in the British Library.