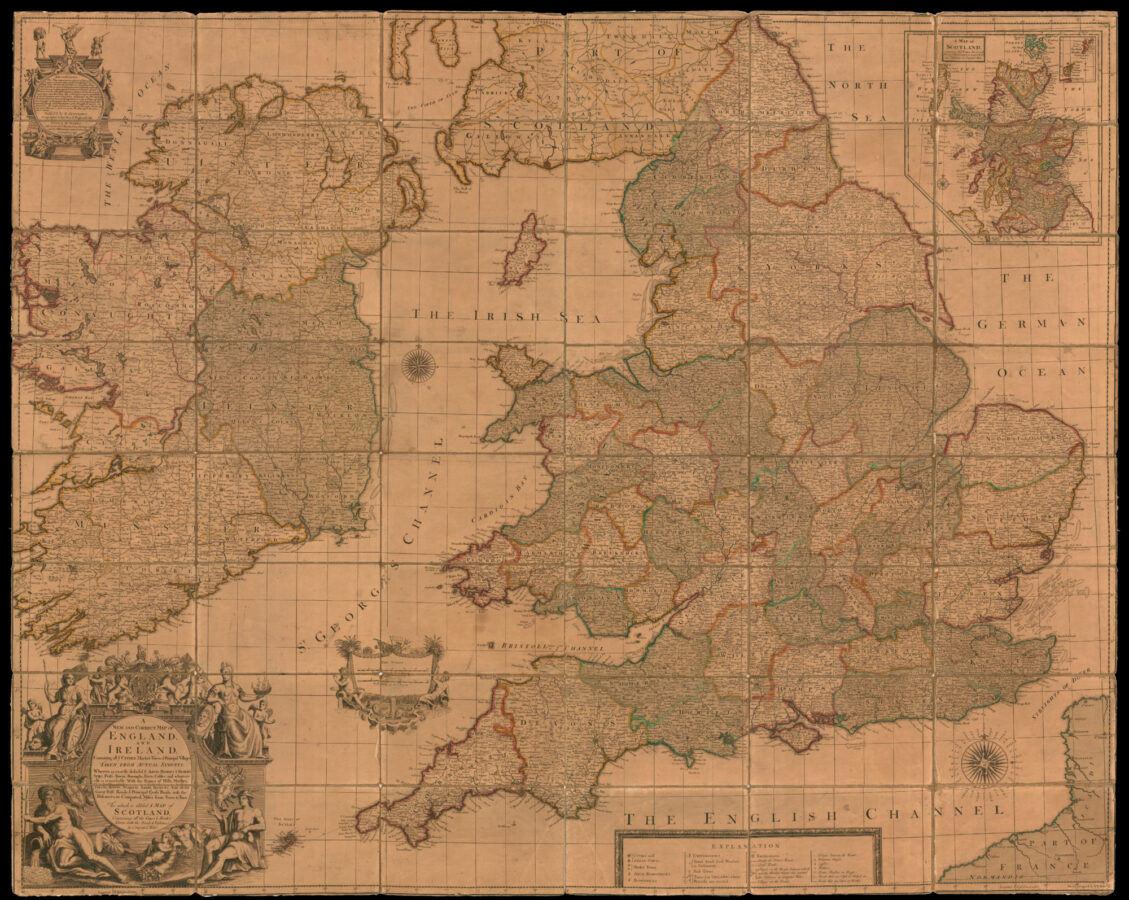 A New and Correct Map of England and Ireland Containing all ye Cities, Market-Towns & Principal Villages. Taken from Actual Surveys, wherein is exactly describ’d ye Arch-Bishop’s & Bishops, Post-Towns, Boroughs, Forts, Castles and whatever else in remarkable; With the names of hills, marshes, forests, rivers, seaports, sands, rocks &c. And all the great post-roads, & principal cross roads, with the distances in computed miles from town to town. To which is added a map of Scotland containing all the cities & market towns, with the roads & distances in computed miles.

On 3 February 1732, George Willdey placed an advertisement in the Daily Post for “…a large new Map of Great Britain and Ireland, together with a very curious Set of Heads of all the Kings of England from William the Conqueror to King George the Second, to place roundit, and is esteemed the handsomest Map ever done, it is six Feet square, the Map alone is four Feet deep by five Feet long”.

The only surviving example of the first state survives in the Mann Atlas at Eton College. The present map bears the imprint of Thomas Jefferys, who, following Willdey’s death, had purchased a large quantity of his stock from his son in 1737. An advertisement to upper left of the map echoes the Willdey’s 1732 advert:

​‘This Map with or without of ye Heads of ye Kings of England round it. Also a large beautiful & Correct Map of the World with or without 20 large sheet maps of ye chief dominions in Europe, and Coelestial Hemispheres round it may be fitted upon screens, or be hang’d against a wall and made to fit different places & sizes, being every way handsome and diverting. Also a set of 23 large 2 sheet maps of the Kingdoms and chief states of Europe the World and Quarters &c. Likewise a complete sett of One sheet maps of all ye Counties of England, the Provinces of Ireland and the several Islands, and Plantations of the English Empire in America. NB most of them are actual surveys done by the best masters; and not to be matched for six times their value.’

The advertisement not only mentions the map of England and Ireland, and other single and two sheet maps for sale, but also a map screen; one such screen bearing the imprint of Thomas Jefferys is housed in the British Library.The present map, like the screen in the British Library, would appear to have been published in the 1750s, as it bears not only Jefferys’ imprint ​‘at the corner of St Martin’s Lane, Charing Cross’, where he resided between 1750–1771, but also William Herbert ​‘at the Golden Globe on London Bridge’ who was active at the address between 1749–1758.

The map would late be reissued in the 1760s by Thomas Jefferys with a re-engraved title cartouche, the scale bar removed, a new key replacing the advertisement in the upper left, and a strip added to the lower part of the map to show the northern coast of France together with an inset chart of the English Channel.

Rare we are unable to trace any example appearing at auction in the last 45 years. Art Kelly is aware of 5 states of the map; all are rare. The present example is the second state with one two recorded institutional examples:in Karlsruhe (Germany)-BLB, #M5; and the other in the Art Kelly Collection.