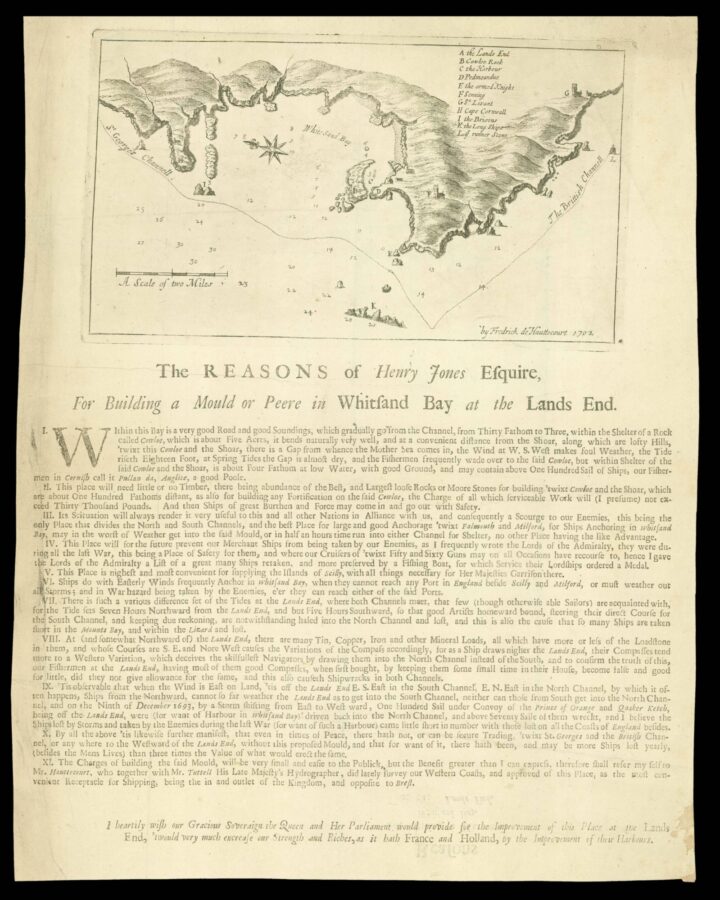 Little is known of the surveyor, Frederick de Hauttecourt; his will, dated 16th March, 1704 describes him as ​“Frederick de Hauttecourt, Gentleman of Saint Margaret Westminster”; he is referred in the text as surveying Cornwall with Thomas Tuttell, the King’s Hydrographer, a globe-maker and instrument-maker. The surveys in Cornwall form all his recorded survey work.

The sheet contains a chart of Whitesand Bay set above an extensive letterpress text; the chart shows the Bay, on the tip of Cornwall, from ​‘H’ (‘Cape Cornwall’), and the coast just to the north, south to ​‘G’ (S.t Levant’), with the ​‘K’ (‘the Long ships’) to the coast, surveyed at an approximate scale of one inch to one statute mile. The land was owned by Henry Jones, the presumed publisher, but was later acquired by Edward Boscawen, a vice-admiral in the Navy.

The text notes:
“… The Charges of building the said Mould, will be very small and easie to the Publick, but the Benefit greater than I can express, therefore shall refer my self to Mr. Hauttecourt, who together with Mr. Tuttell His Late Majesty’s Hydrographer, did lately survey our Western Coasts, and approved of this Place, as the most convenient Receptacle for Shipping, being the in and outlet of the Kingdom, and opposite to Brest. I heartily wish our Gracious Soveraign the Queen and Her Parliament would provide for the Improvement of this Place at the Lands End, ​‘twould very much increase our Strength and Riches, as it hath France and Holland, by the Improvement of their Harbours.“
with particular advantages for Liverpool merchants, whose ships could safely over-night there on the way to and from London, rather than risking the treacherous waters round the Scilly Isles or swinging wide out into the Channel and risking capture by the French.