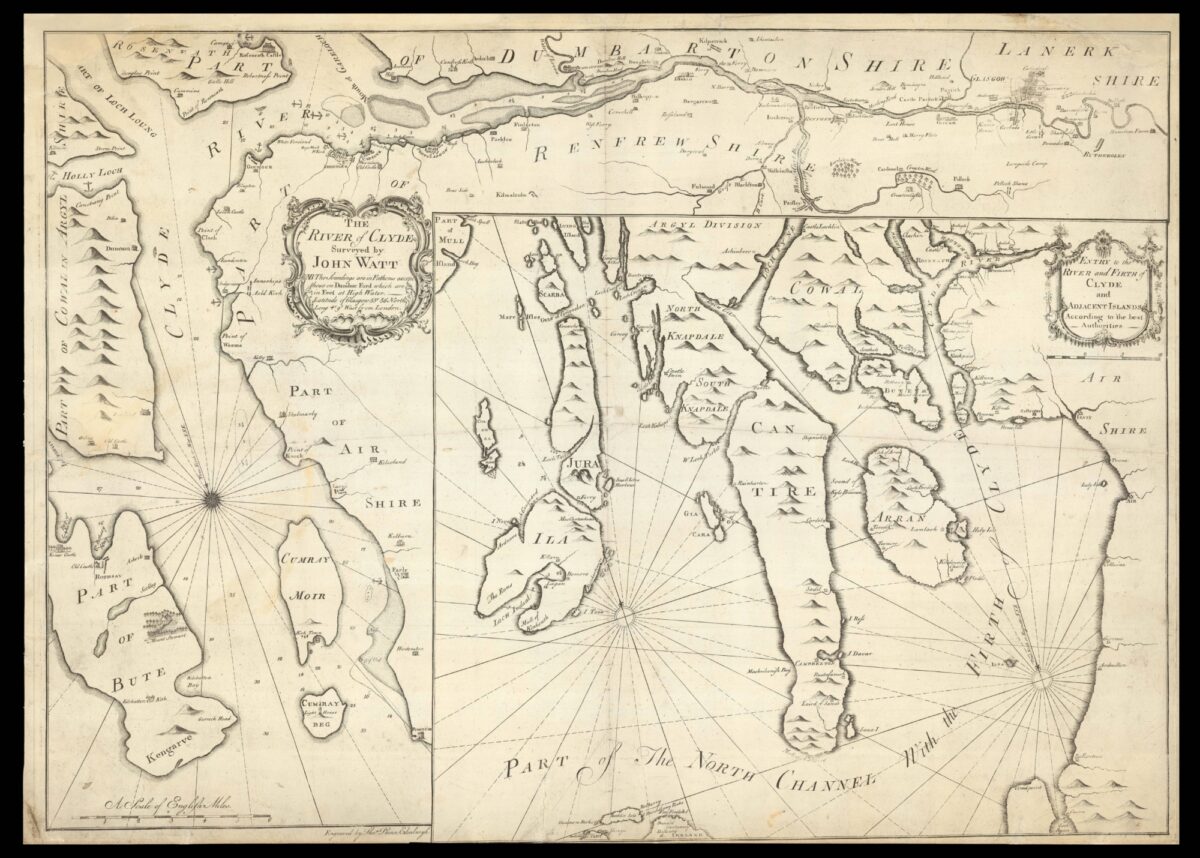 An extremely rare map of the River Clyde with an interesting family history.

During 1750s, the Glaswegian authorities were engaged in a series of abortive attempts to improve the navigability of the river Clyde. Port Glasgow, which had been developed as a key trading hub after the 1707 Act of Union, was facing increasingly dangerous levels of silt deposit, as well as mounting competition from the nearby port of Greenock. Following a range of fruitless schemes, civil engineer John Smeaton proposed plans for a lock system that would enable larger ships to pass through the waters of the Clyde. Smeaton’s plan was met with opposition from other neighbouring towns, and so the magistrates of Glasgow ordered a further survey in 1758.

Alexander Wilson, from the observatory at Glasgow University, headed up this project, and employed as his assistant James Watt, a young mathematical instrument maker at the university. The survey resulted in a single manuscript map of the Clyde. The following year, construction work eventually began on the lock system, but again in 1762, the works were called off when it was discovered that the underlying silt would not be able to support the walls. The scheme had nonetheless attracted great public attention, and James Watt decided to capitalise on this general enthusiasm for the Clyde.

James was the nephew of respected mathematician and teacher, John Watt. Between 1732 and 1734, John had surveyed the lands around Glasgow and the west coast of Scotland, and among the maps he produced were ​‘Entry to the River and Firth of Clyde and Adjacent Islands’ and ​‘The River Clyde Surveyed by John Watt Senr 1734’. Interestingly, these maps had been included by John Smeaton in his plans for the improvements of the river, and are found in his ​‘Civil and Mechanical Engineering Designs’ in the Library of the Royal Society.

Three decades later, his nephew combined the two maps on a single sheet and published ​‘The River Clyde by John Watt’. There were numerous errors on John Watt’s original maps, particularly in the course of the Clyde and the outline of the western coast. Consequently, James made many alterations to his uncle’s maps before publishing them, with a letter to his father recording that:

​“I altered little else of the Island of Ila excepting Loch in Dual but you will see a considerable alteration of Oransa & Collansa. As Mcdowal had likewise surveyed them I thought it was proper to lay them down in their right shapes tho I believe that his survey is not much to be depended on which was the cause I did not rub out Ila altogether. It still very different from his but have such manifest Errors in his Bearings that there is no knowing the situation of any place.“

For want of a suitable printer in Glasgow, Watt travelled to Edinburgh to have his map produced, and in the week of October 15, 1759, an advertisement appeared in the Glasgow Courant, listing ​‘A Large Sheet MAP of the River CLYDE, from Glasgow to Portincross, from an actual survey. To which is added, A DRAUGHT of PART of the NORTH CHANNEL, with the FRITH of Clyde, according to the best authorities’, which was available from Watt’s shop at the university.

While there are no sales records for the map, it seems to have been sufficiently popular to warrant a second edition, published in 1794. The first edition is incredibly rare, with only one other known example, held by the British Library. The last example to come to auction made £4,560, Sotheby’s 2003.