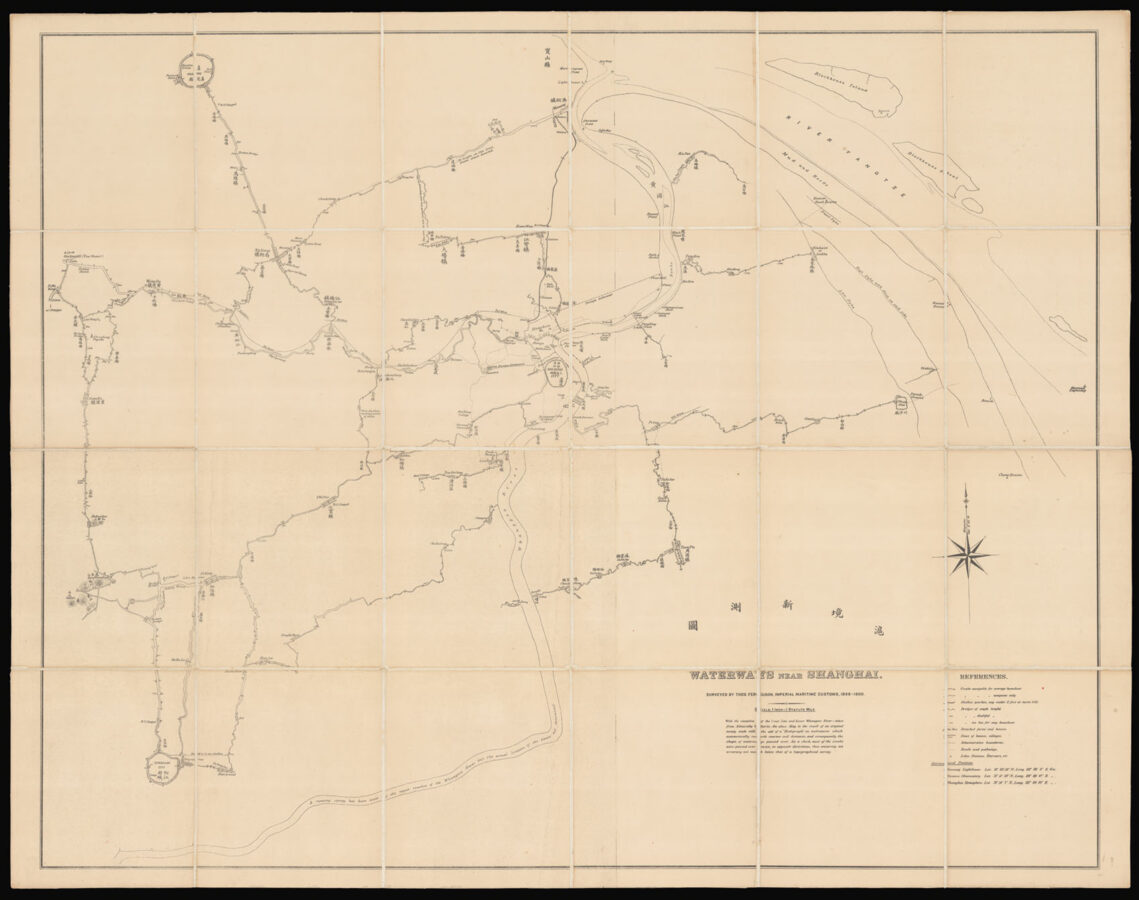 With the exception of the Coast Line and Lower Whangpoo River — taken from Admiralty Charts, the Map is the result of an original survey made with the aid of a ​“Hodograph,” an instrument which automatically records courses and distances, and consequently the shape, of waterways passsed over. As a check, most of the creeks were passed over twice, in opposite directions, thus ensuring an accuracy not much below that of a topographical survey.

The map shows Shanghai and the surrounding area to just east of Suzhou. Notes to the map describe the dredging of rivers, a note to the Whangpoo [Huangpu] River reads: ​“A running survey has been made of the upper reaches of the Whangpoo River, but the actual location of the banks are not determined”. A key to the the right of the title provides information on creeks navigable by house boat, by sampans only, shallows, bridges of ample, doubtful, and too low height, houses, administrative boundaries, roads, and Likin stations.

The bridges, rivers and towns are marked with hand-written Chinese. For example, 黄浦江 Whangpoo River on the fourth sheet of the top row. Lujiazui 陆家嘴 marked on the left side of the sheet below is a renowned locality in Shanghai, a peninsula formed by a bend in the Whangpoo River, which has been developed specifically as a new financial district of Shanghai since early 1990s.

Thomas Ferguson was a mapmaker active around 1900, based in Shanghai. In addition to this map, he also compiled Map of the Country around Soochow [Suzhou] surveyed between 1900–1901. The map was commissioned by the Imperial Maritime Customs, a tax collection institution jointly set up and managed by the Chinese, French, British and American representatives in 1854. Located in Shanghai, which had become a foreign treaty port since China’s defeat in the First Opium War in 1842, the service aimed to replace the previous imperial customs house. The new institution managed customs collection in the treaty ports between 1854 to 1948. Between 1862 and 1899, steam boats began to ply inland along the narrower waterways. ​“Five new Treaty Ports and five Ports of Call had been opened along the Yantze and trade had grown enormously. So, to meet the altered conditions and calls for revision, Hart [Commissioner of the Imperial Maritime Customs] consulted the river port Commissioners and, as a result, revised Yangtze Regulations containing many provisions for tightening Customs control were put into effect on 1 April 1899” (Foster Hall 20). Ferguson’s map was commissioned in the same year and was likely part of the Customs Service’s drive to attain more knowledge of the area.