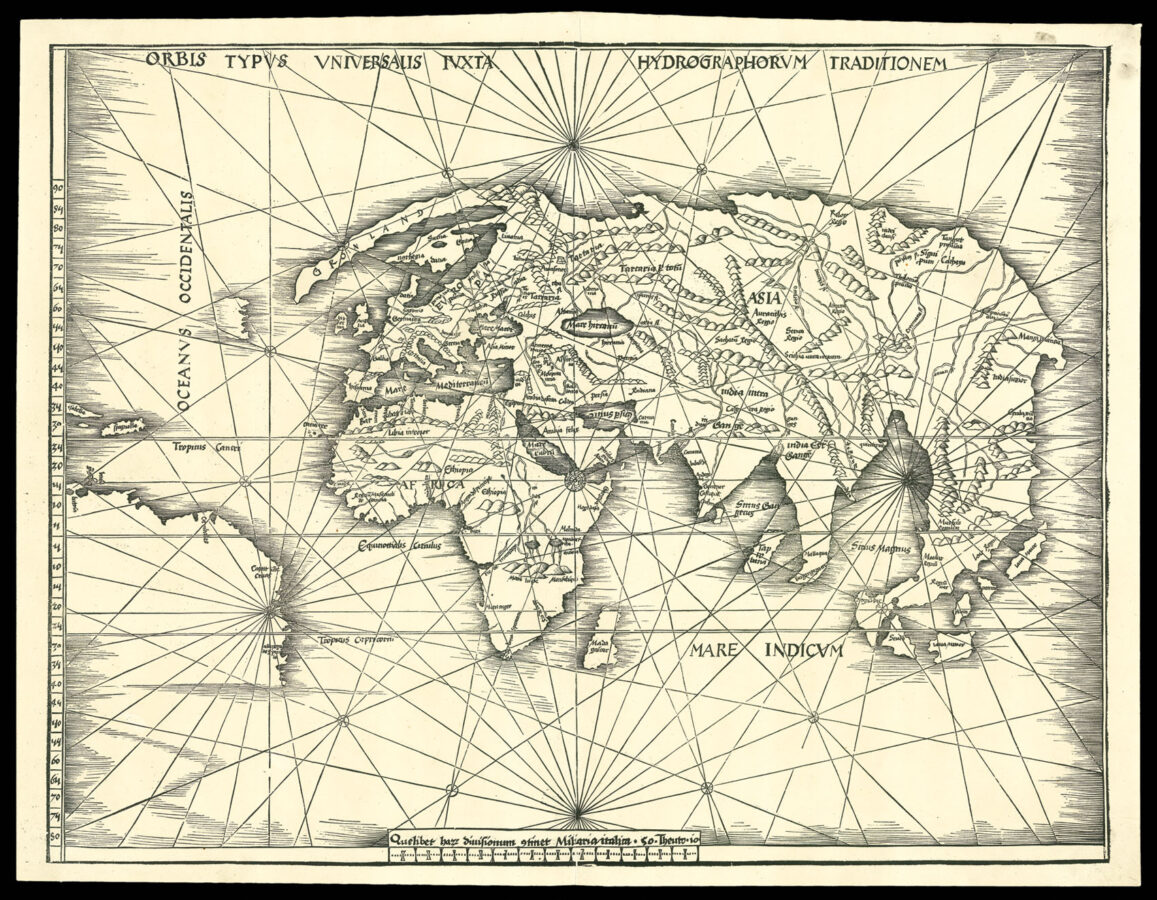 Martin Waldseemuller’s 1513 Strasbourg edition of Ptolemy’s ​‘Geography’ was one of the true milestones in the history of cartography. It was the first edition to supplement the traditional Ptolemaic maps with an extensive series of modern maps, which are regarded as the first modern atlas.

The famous modern world map from 1513, largely because of a statement in the preface of the atlas that refers to a ​‘Mariner’s Chart’ derived from observations made by the ​‘Admiral’, has been wrongly attributed to Christopher Columbus, and is often still referred to as the ​‘Admiral’s Map’. In many ways, the mistake is understandable, as the map is one of the earliest to incorporate geographical information about the New World from the voyages of Columbus and Cabral. It may even be the earliest map to depict America as separate from Asia and possibly the earliest to show the New World at all.

​“The question of this map’s rightful niche in history rests”, according to Suarez, ​“on the uncertain date of its creation. Although not known to have been published until its inclusion in Waldseemuller’s atlas in 1513, evidence suggests that it was prepared at an earlier date.” Among this evidence, is the existence of a single unique variant, discovered by Henry Stevens and now in the possession of the John Carter Brown Library, with the name ​‘America’ inserted in the woodblock, apparently struck before Vespucci fell from Waldseemuller’s grace shortly after 1507. Stevens argued persuasively and at length that it was a proof state of about 1506, and thus the first map to include the name America, predating Waldseemuller’s own 1507 wall map of the world, which is usually accorded that honour. Additional arguments that the map was prepared earlier include the fact that the 1513 atlas has separate maps of both America and Asia that are geographically more advanced than the world map’s rendering of these continents. It is also not uniformly sized with the other maps in the 1513 atlas, it is larger and was often trimmed so that it would fit within the binding. Shirley suspects that the map may have been completed around 1505 or 1506, then laid aside until the atlas’s publication.

The map’s geography tends to confirm an early date for the map of about 1506. The northeast coast of South America is shown, and north of it are the islands of ​‘Isabella’ (Cuba) and ​‘Spagnolla’ (Hispaniola). There is no sign of North America, except for an unnamed fragmentary coast to the southwest of Greenland. Africa is well-formed, and Asia is shown similar to the depiction on Waldseemuller’s 1507 map, except with a superior shape to the Indian subcontinent (‘india intra Gange’).

In any event, the Waldseemuller map represents a pivotal point in the shifting image of the globe as cartographers grappled with the existence of entire new continents. ​“The representation of the Americas is most rough and incomplete, as if Waldseemuller felt uncertain about the shape of the New World” — Shirley.