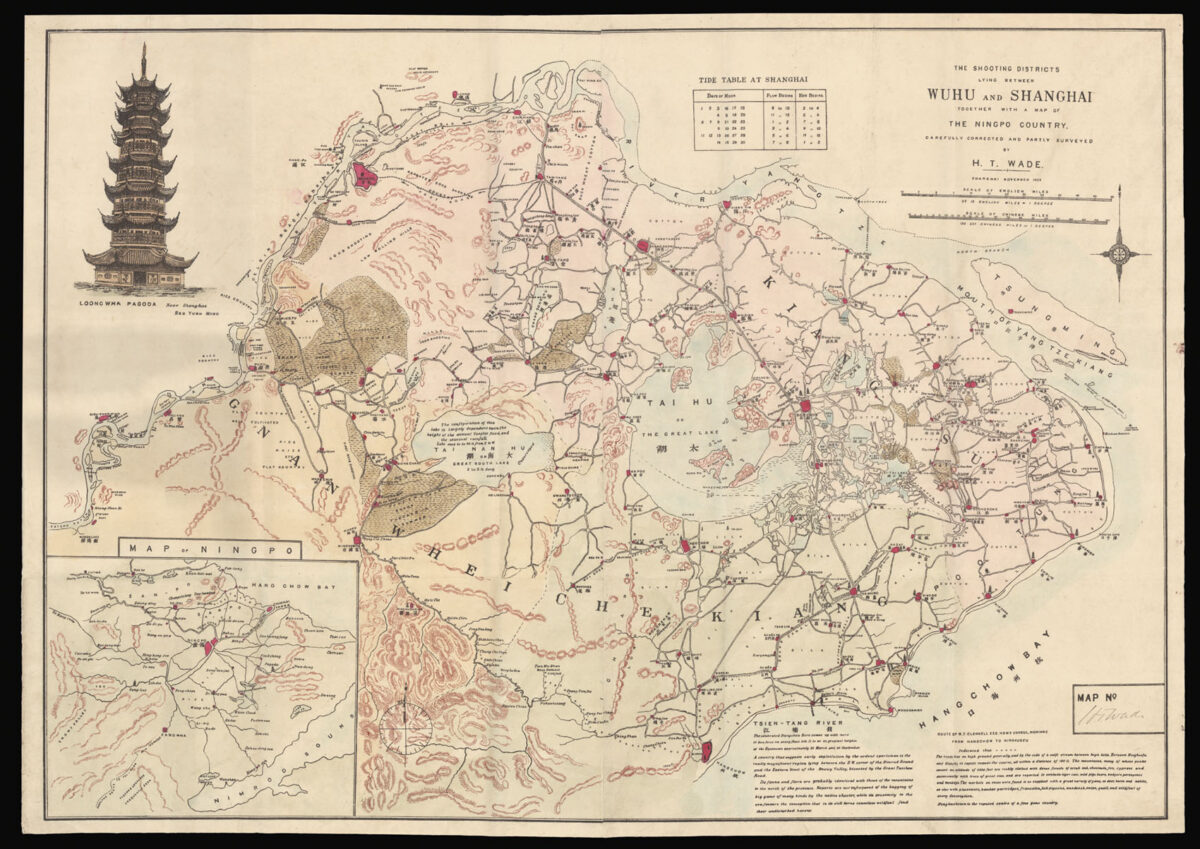 Wade’s Map of the Shooting Districts Near Shanghai

The Shooting Districts Lying between Wuhu and Shanghai together with a map of the Ningpo Country carefully corrected and partly surveyed by H.T. Wade.

The map stretches from west to east from modern day Tongling to Shanghai, and north to south from Nanjing to Hangzhou. The major districts and provinces are marked in English and Chinese. Also marked upon the plan are cities, towns, villages, marshes, swamps, bridges, pagodas, hills, boundary provinces, and canals.

The map was produced to aid the gentleman find suitable areas around Shanghai to shoot game. Hence, as well as the labelling of geographical and man-made features, the map is replete with phrases such as ​‘hills good shoot’, and ​‘first rate shooting’. The map differs greatly from Wade’s shooting map of 1893, with new areas having been surveyed and much of the topography amended. To the lower right are two legends, the first contains remarks on the Tsien-Tang River (Qiantangjiang), with gives information on the great tidal bore, and the excellent opportunities for big game hunting: ​“reports are not infrequent of the bagging of big game of many kinds by the native shooters”. The second note records the route of W.J. Clennell, British consul, from Hangchow (Hangzhou) to Ningkuofu (Ningguofu), and the opportunities for game hunters that he found on the way. His route is marked on the map by a series of ​‘x’s. To the bottom left corner is an inset of Ningpo (Ningbo) and the environs. To the upper right is an image of the Loong Wha Pagoda (Longhua Temple).

A manuscript inscription to the inside cover the J. Penniall chief instructor Imperial Naval College, Nanking (Nanjing). The map is accompanied by a phamphlet by Wade containing distance tables for all the major routes, in both English miles and Chinese Li里. The pamphlet’s introduction provides information on how the surveying and the collating of data was carried out, and contains less than complementary asides regarding the local Chinese population. Wade ends the introduction thus:

​“The ​‘Map’ and these ​‘Tables’ will it is reasonably hoped sufficiently answer the purpose for which they were designed until such time as the inevitable railway shall have discovered and made accessible some of the many sporting Paradises which this great land undoubtedly contains”.

Rare: OCLC and COPAC record only one institutional example, that in the British Library.