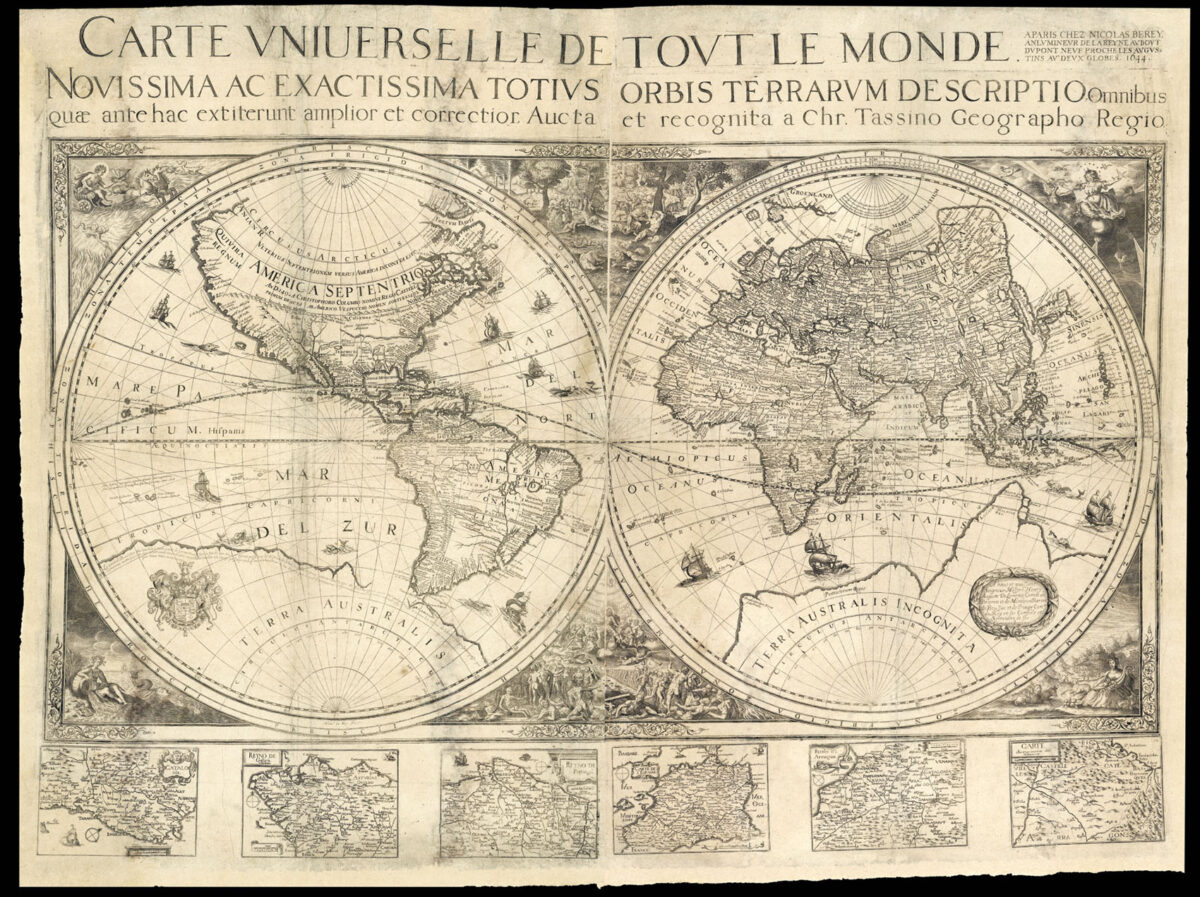 Unrecorded four-sheet double-hemisphere world map, based upon the Jodocus Hondius and Henricus Hondius’ four sheet world map of 1627, of which only two of the four sheets are known to have survived (Shirley 319).

Prior to the discovery of this example, this map was known in two later states, a 1650 example by Nicolas Berey and a 1668 example by Hubert Jaillot.

The basic cartographic features of the map can be traced to Blaeu’s world map of 1605, which was later reissued by Jodocus Hondius Jr. in 1624. Korea is depicted as an island and California is firmly attached to North America. To the eastern hemisphere, ​‘Beach’ is prominently named to the northern most promontory of ​‘Terra Australis Incognita’. Also inscribed along the promontory are ​‘Maletur Reg.’, and ​‘Lunach’, a legacy of the chronicles of the thirteenth century traveler Marco Polo.

Jacob Le Maire and Willem Schouten’s voyage of 1616–18 is mentioned, with the Straits of Le Maire between Tierra del Feugo and Staten Island named, as are the Tonga Islands in the Pacific discovered by Le Maire; his name also appears on part of New Guinea.

The exact date that Tassin engraved the map is not known. However, the six miniature maps of Spain and her regions, below that map, do give us a terminus post quem of 1634, as this was the year that Tassin first issued his maps of Spain. In 1643 Tassin sold his plates and paper stock to Nicolas Berey.

The French title and imprint, together with the text to the western hemisphere’s ​‘Terra Australis’ would appear to be the only new information added to the map by Nicolas Berey. The rather crudely engraved text relates to Hendrick Brouwer’s expedition of 1643 — for the Dutch East and West India Companies — to Chile, in order to establish a base for trading gold at the abandoned ruins of Valdivia. During the voyage Brouwer circumnavigated Staten Island (marked ​‘Stanten Lant’ upon the map) — which formed part of the Straits of Le Maire — thus proving that it was not part of the great southern land, as previously thought. The crudely wrought text, together with the fact that Berey has not updated the cartography, would suggest that the publication of the map was rushed through; with Brouwer’s discovery used as a tag or hook upon which to sell the map that he had so recently acquired.

The map’s outer decoration consists of depictions of the four elements — fire, air, water, and earth — to the four corners; and the garden of Eden and the last judgement, to the upper and lower centre respectively.

The map was later reissued by Berey, in 1650, without Tassin’s Latin title but with ​‘Staten lant’ correctly depicted. It was published again by Hubert Jaillot in 1668.