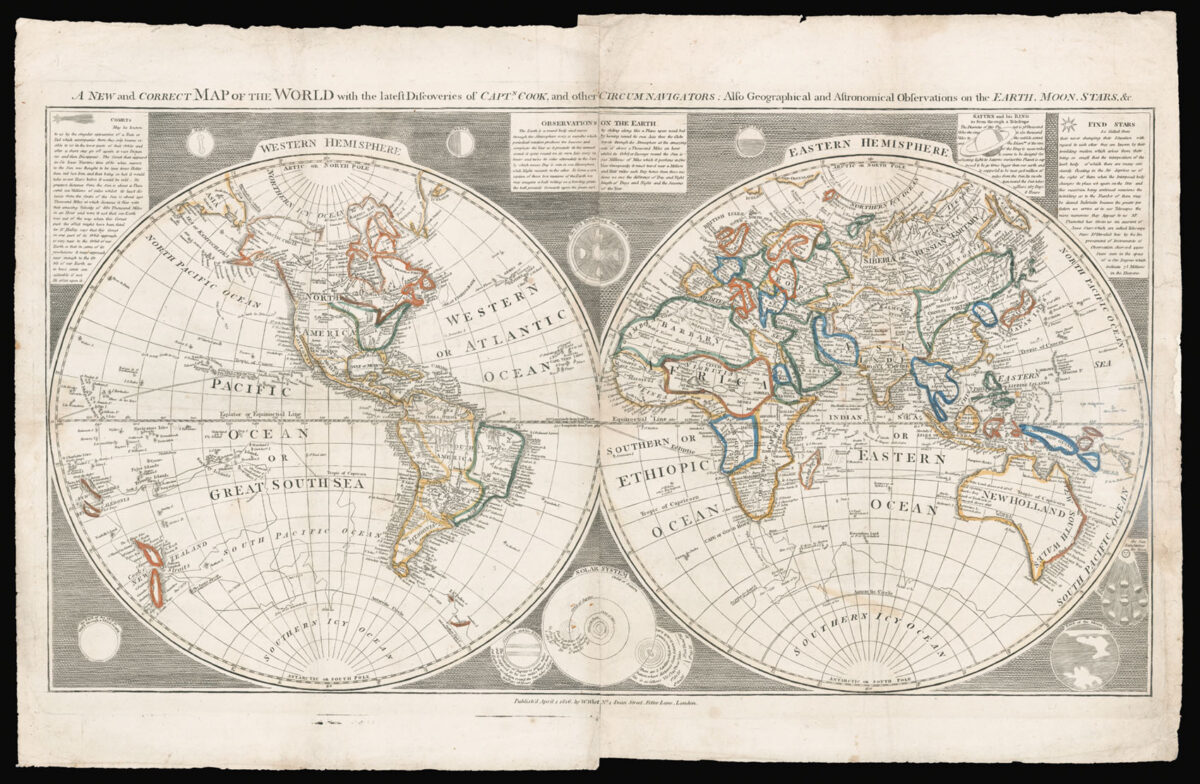 A New and Correct Map of the World with the latest Discoveries of Captn. Cook and other Circumnavigators; Also Geographical and Astronomical Observations of the, Earth, Moon, Stars, &c.

The present map is the last in the line of two sheet world maps, published in England between 1680 and the beginning of the nineteenth century. The first two sheet world map was published by William Berry in 1680, copying the design of the French cartographer Alexis-Hubert Jaillot. The map was aimed at the mass middle market: larger than the folio sheet maps that appeared in the atlases of the eighteenth century, the map was intended as wall or screen decoration, and was considerably cheaper than the multi-sheet world maps published at the time.

In their comprehensive carto-bibliography of two sheet English world maps, Armitage and Bayton-Williams, divide the maps into four different proto-types after the mapmakers: Berry, Moll, Senex, and Price. The present map is codified as ​“Senex Subtype G”; the category is distinguished by “ ​‘Tab’ labels, containing titles, attached to each hemisphere”. This form of the map was first introduced by John Evans in 1794. William West received training from John’s brother James Evans in the 1780, and he would late, with the help of Thomas’s son James, take over the business when Thomas retired. West for the rest of his career was know as a publisher of children’s educational material, and only known to have published two maps, the present world map, and a map of England and Wales. Both of which are exceedingly rare.

The map bears a great similarity with Evans’ work. The geographical features are relatively up-to-date apart from the depiction of Tasmania as contiguous with the Australian mainland, and does not show the discoveries made when Matthew Flinders and George Bass sailed through the Bass Strait in 1798–1799. To the east of Papua New Guinea is a landmass named ​“Terra de Arsacides”, which also appears on d’Anville’s 1761 map, possibly named after Arsacides, the successors of the first King of the Parthians, Arsaces. Curiously although the death of Cook is recorded on Hawaii, only his Second voyage is marked. Two lines of text to the upper Pacific, erroneously dates the track of Cook’s Third voayage: ​“Cook’s return in 1772”, and ​“Cook’s track to America 1773”; possibly realising his error neither track has been engraved. Surrounding the map is a model of the solar system, the light of the sun on the moon, and the earth; the faces of the Moon, Mars, Venus, Mercury, Saturn, and Jupiter; the Sun through a telescope; and text retailing to the fixed stars, comets, the earth, and Saturn’s rings.

The only other recorded example of the map, housed in the British Library, is dated 1803. The date of 1816 on the present example is somewhat problematic, as it is believed that West emigrated to Ireland sometime in the early nineteenth century, and did not return to London until the 1830s. 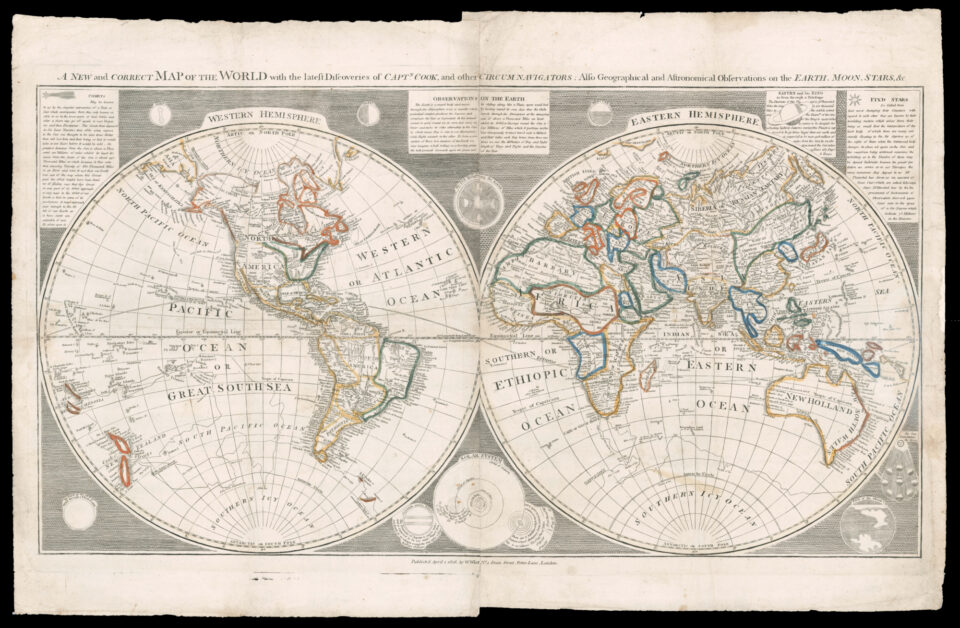