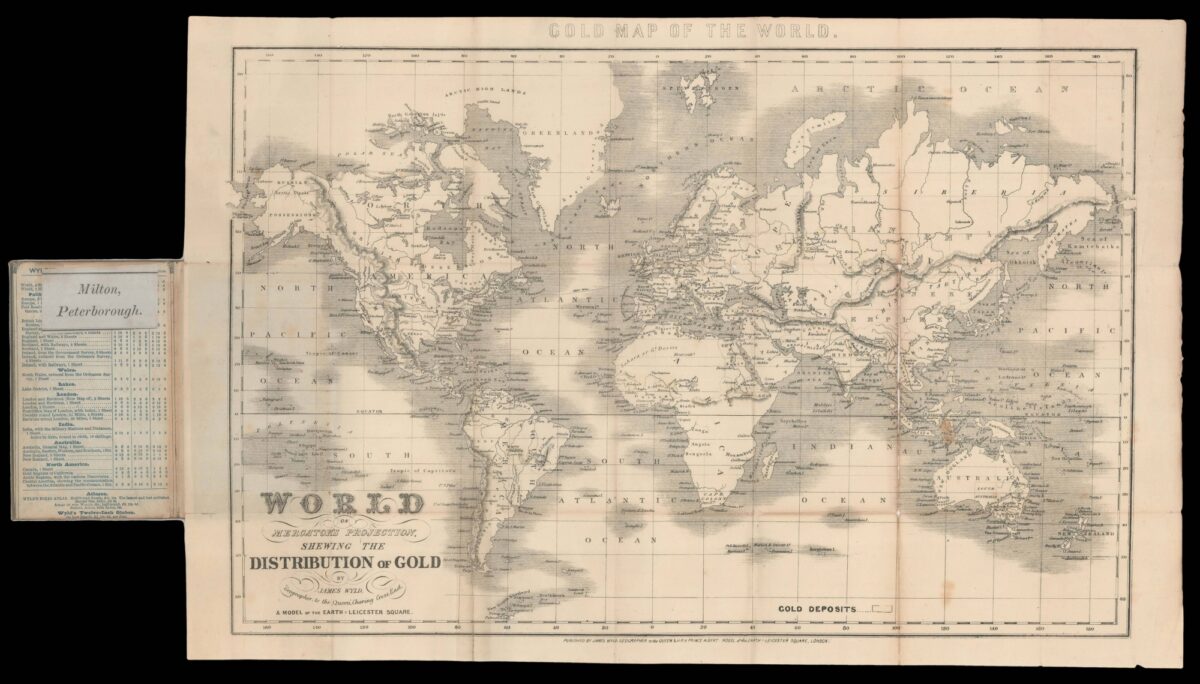 World on Mercator’s Projection, Shewing the Distribution of Gold.

One of five maps issued with Wyld’s very rare ​‘Gold Fields of Australia’, also 1851, this is possibly a proof or prototype copy, for issue as a pocket map, with the deposits uncoloured. No other examples of a separate issue for this map are recorded.

The imprint makes reference to Wyld’s famous ​‘Great Globe’, or ​‘Monster Globe’, constructed to coincide with the Great Exhibition, which had rejected its inclusion on account of its vast size, of more than 60 feet in diameter. It was a popular attraction at Leicester Square between 1851 and 1862. Since it was hollow, and contained a staircase and elevated platforms, the public were able to climb up inside, and feel the interior surface of the earth, complete with mountains and rivers to scale. The front paste-down of the wallet gives a table of distances, and advertises Wyld’s atlases and more manageable 12-inch globes; all of which were available at the attraction at Leicester Square.

James Wyld (1812–1887) was ​“the most important mapmaker producing maps of London in the year of the Great Exhibition”. Wyld was a highly successful publisher, MP for Bodmin, and an active figure in public life. He promoted the development of the British Library and campaigned for the Public Libraries and Museums Bill, accusing its agricultural opponents of trying to make the poor drink instead of read in order to keep malt consumption high; although he did oppose the introduction of the Ordnance Survey on behalf of private surveyors. Like his father, he was made Geographer to Queen Victoria and Prince Albert in 1836. He built his business on his ability to produce maps quickly in reaction to new discoveries and information: Punch remarked drily that if a country were discovered in the centre of the earth then Wyld would have a new map out ​“as soon as it is discovered, if not before”.

Rare: no other recorded examples found.

with the contemporary library label of ​“Milton, Peterborough”.